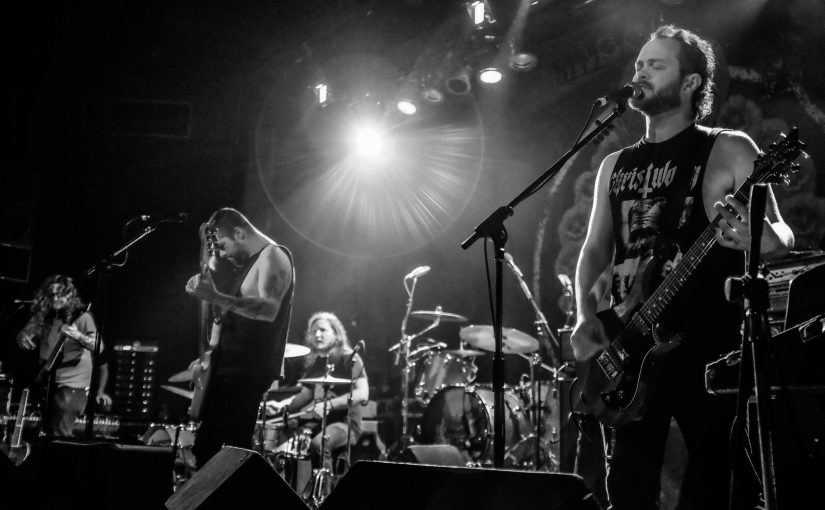 Doom is a primal element of heavy metal, one of the tributaries that has been feeding the genre since Black Sabbath recorded songs like Electric Funeral, Black Sabbath and Under The Sun. The glacial pace, the mournful minor key, the rafter-rattling riff and the brontosaurus stomp of the rhythm section are essential ingredients. While the style has seen many changes over the years and numerous subgenres have formed around it; the core is still the same, still intensely powerful and in the right hands can still sound just as relevant as it did nearly 50 years ago.

However, it’s also a fairly simple form that requires adherence to certain elements to maintain the qualities of the form itself (similar to blues, you can only stretch it so far before it ceases to be blues). For every truly unique band in the genre you have another 50 that are seemingly happy recycling Sabbath and Candlemass riffs ad nauseum with minimal individuality. Despite those odds truly inspired bands do occasionally come along and progress the genre forward; while simultaneously staying true to the established roots. Pallbearer is one such act.

Hailing from Little Rock, Arkansas, Pallbearer has attracted an enviable amount of exposure over the past 5 years. Their debut album ‘Sorrow And Extinction’ was immediately hailed as a classic doom metal release; their purity of approach and obvious love for the genre was evident from the beginning, as was their unique spin on it. Their stock rose even further with the impressive follow-up ‘Foundations Of Burden’ in 2014, another widely praised and discussed album that ended up high on many best-of-the-year lists. Their combination of crushing heavy riffs, clean melodic vocals and progressive rock-influenced arrangements helped them create an identifiable niche in the genre and their sound was maturing at an impressive rate. Now with ‘Heartless’ they’ve crafted their singular personal statement, an album that takes all the promise shown on their prior releases and delivers an album that is distinctly Pallbearer.

The expansion of their sound is immediately discernible in opening track I Saw The End. The arrangement is more spacious and airy than the wall-of-sound approach on their prior albums; the guitar sound is a little lighter, a little drier than what they’ve employed previously. Instead of the riff being the driving force here it’s the melody of the song that carries the forward momentum. It attains a rare balance of accessibility without compromise, still carrying the heft the genre requires but with deft subtlety. The lovely vocal arrangement of the bridge section recalls the classic 70s mainstream progressive rock of Kansas or Boston while the ending instrumental segment with its gorgeous interweaving guitar lines had me simultaneously thinking about Iron Maiden and Thin Lizzy at their most melodic.

The first single Thorns increases the weight a bit, the guitar sound leaning a little more toward the crush heard on their earlier releases, but with a newfound economy in the arrangement. At 5:25 it’s one of the most economical songs in their discography and demonstrates how quickly their songwriting has matured. Lie Of Survival and the album-closing A Plea For Understanding are unabashed doom ballads. Heartfelt, majestic and fiercely emotional, these epic tracks unfold at a gloriously deliberate pace that gives the listener ample time to savor their beautifully detailed arrangements. One of the most obvious improvements on ‘Heartless’ are the lead vocals of Brett Campbell. His clean, melodic approach has been a defining element since their debut, but his confidence level has been growing exponentially with each release and he has fully come into his own on ‘Heartless’. He sings with passionate authority throughout, but his performance on these mellower excursions are the real highlight of the album and his tasteful restraint ensures they never fall into the trap of histrionics that ensnares so many metal vocalists. The same taste and restraint carries over to the impressive guitar work; from gentle classical-inspired sections to soaring, melodic leads, Campbell and fellow-guitarist Devon Holt have both put in career-best performances on ‘Heartless’.

The centerpiece of the album is the nearly 12-minute epic Dancing In Madness, Pallbearer really gets to show off the breadth of their sound on this piece. It begins fully in Pink Floyd territory, a beautifully lush wash of an arrangement tailor-made for a David Gilmour-esque flight of fantasy guitar solo. Then the mood turns more oppressive as the guitars enter in funeral-march lockstep and the psychedelic-tinged vocals add an air of disquiet to the proceedings. At the halfway point the first truly aggressive doom riff appears, a harkening back to their earlier sound, here made even more powerful by the unexpectedness of its arrival.  The gang vocals that accompany it adding the perfect touch of cathartic menace.  Then acoustic guitars segue us into the mournful final section.

Cruel Road offers the most unabashedly “metal moment” of the album with its galloping NWOBHM-inspired riffs and 80s style prog metal elements (bringing to mind Fates Warning among others). It is followed by the superlative title track, an 8-minute distillation of Pallbearer circa 2017 and my personal favorite on the album.

‘Heartless’ is also a great-sounding album.  With a more expansive soundstage than the overly-compressed ‘Foundations Of Burden’, the spaciousness of the mix allowing the very detailed arrangements to fully come alive. As cliché as it may be, ‘Heartless’ is the kind of album you need to slowly absorb, as the details become more apparent with repeated exposure. I’m sure a certain element of their fanbase might be disappointed that ‘Heartless’ isn’t quite as dark and heavy as their prior albums, but it’s such an organic evolution I hope they can come to appreciate the artistry of it. What I hear is a group reaching the next level; ripe for continued crossover success and deserving of the hype.