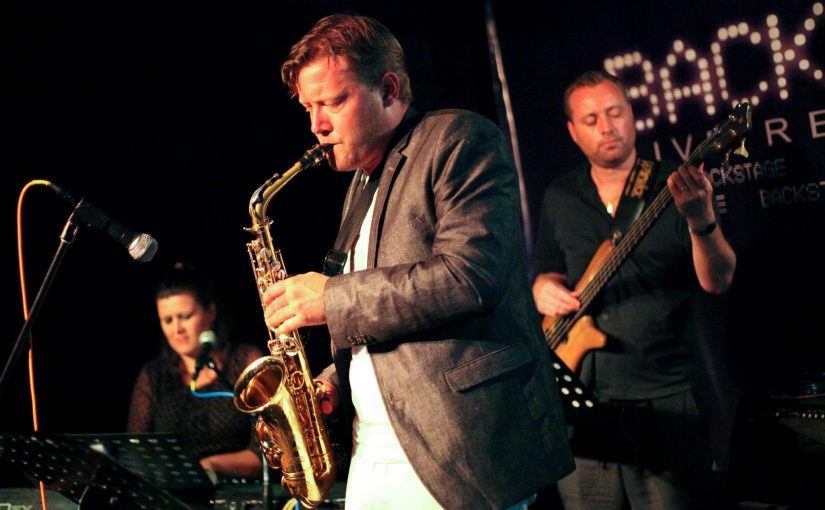 Progressive music does seem to favour the long form when it comes to song writing, you know the 25-30 minute epics that sometimes seem to go on forever. I’m as guilty as the next man for listening to, and promoting, these types of tracks but they can become interminably boring if overplayed.

Every now and then it is really good and refreshing to have an album full of shorter tracks, even sub four minute ones, where the brevity is at the heart of what makes them good songs.

Swedish prog legends Änglagård are well known for their extended instrumental pieces so it did come as something of a surprise when I heard that band member Linus Kåse was releasing a solo album that concentrated on the art of the song, and short songs at that!

Now I know Linus and he does have a sunny disposition to be fair, I asked him about this solo release and this is what he had to say:

“The album includes a bunch of originals that I wrote and recorded a few years back and I decided to spend the last couple of months to finish it up. I think it’s a fun album, that’s the intention anyway. I believe it is mainly influenced by some of my favorite artists of the 60’s and 70’s pop/rock era so you will find some Beatles, Procol Harum and even Barry Manilow in there. To me the album is a labour of love for sure. If it wasn’t I would never release it to the world.”

Linus plays grand piano, saxophone, keyboards and guitars, provides the vocals and produced and mixed the album, which is no mean feat but he did have some help. Kristofer Eng Radjabi (bass, Guitars) and Daniel Kåse (drums) were heavily involved and there are guest appearances from Lasse Bjurhäll (guitars), Rickard Andrinsson (guitars), Benjamin Quigley (double bass) and Maria Kvist (backing vocals). Just a few bars into opener Smile and you know you are in for a treat, a Creedence Clearwater Revival influenced track that just screams uplifting, feel good music at you. There’s a carefree attitude to the bouncing melody and to Linus’ sunny vocals. The jangling guitars and clear-cut precision of the rhythm section give a real 60’s/early 70’s atmosphere and you will find yourself smiling, job done methinks! Mary has a beautifully wistful tone to it and a nostalgic, sepia tinged joy at its heart. The song has a real summer of love, hippy feel throughout and is almost hypnotic in its delivery. Linus really does have a great voice and its used to superb effect on this track and you can hear the Manilow influence. There’s a great piano introduction to Winter Season, almost labyrinthian in its five minute length. A more serious overtone is at the core and it sounds like Wings heavily influenced the song. The pared back chorus is a gem and Linus is starting to prove he really is a talented songwriter when he can produce great rock tracks like this.

The singer/songwriter comes to the fore on the lilting piano-led Above The Line, another nod to the mercurial Mr Manilow. Quirky and idiosyncratic, it’s a real delight and a song where you find your head nodding and your foot tapping along to the excellent melody. In fact, you probably will find yourself singing along at the top of the voice, if you’re anything like me that is! A jazzy and funky piece of music, Do You Believe sees Linus’ voice on top form, surrounded by some rather stylish musicians. The organ and piano are the main components but that rhythm section is really proving to be the driving force behind the songs, the drums and bass are classy and polished and give this Supertramp feeling song a real edge. Fast paced and a bit left-field, All That Could Go Wrong is another three minute gem of a track, a catchy piece of music that never outstays its welcome and showcases the art of writing a short track to a tee. It’s almost like planting the early Beatles right in the middle of the 70’s with its combination of snappy chorus, elegant swathes of organ and short but sweet guitar solo. The next five tracks all form the E minor suite, Fisherman’s Song is a laid back two minute instrumental with a large nod to the organ sound of Procul Harem. It’s a great piece of music that really gets under your skin, leaving a mark that stays long in the memory, the soaring music is quite inspirational at times. The track segues straight into the wonderful Modern Times which, to my ears, sounds like Linus’ audition to write a new Bond theme! I love its urgent and upbeat drive with the great backing vocals from Maria Kvist. Edgy, funky guitars and a ferocious drum beat dominate proceedings at a break neck speed leaving you breathless in admiration. Another segue into The Boat Is Sinking which is a forty-six second reprise of the melody from Fisherman’s Song. The piano driven brilliance of Egomania is my favourite track on the album and is a fantastic piece of songwriting that is synonymous with Scandinavian songwriters of modern times. If you’ve heard the latest Rikard Sjöblom album then you’ll know what I mean. An upbeat melody along with great lyrics are the heart of the song and Linus’ vocal delivery is, once again, perfect. It’s a piece of songwriting that just makes me smile with its inventiveness. The last part of the E minor suite is Fisherman’s End, a soaring close out that again reprises the earlier melody and finishes everything on a high note.

The album closes out with Linus farewell to the listener, Goodbye For Now. It’s a song that makes you feel you’ve been part of something and it feels like a wonderfully warm goodbye from this excellent musician and songwriter. Those of you who remember Gilbert O’Sullivan will hear him in the vocals. There’s almost an upmarket cabaret feel to the song and I can imagine myself in a great theatre somewhere in the world as Linus closes out his show with this memorable track and you feel a lump in your throat and moisture in your eyes as everything comes to an end.

One of the most surprising and impressive releases of the year and one that will leave a huge smile on your face. Linus Kåse has virtually reinvented the four minute song with this new album and ‘I’ is as impressive a listening experience as anything else you will hear in a long time.

Buy ‘I’ from Itunes