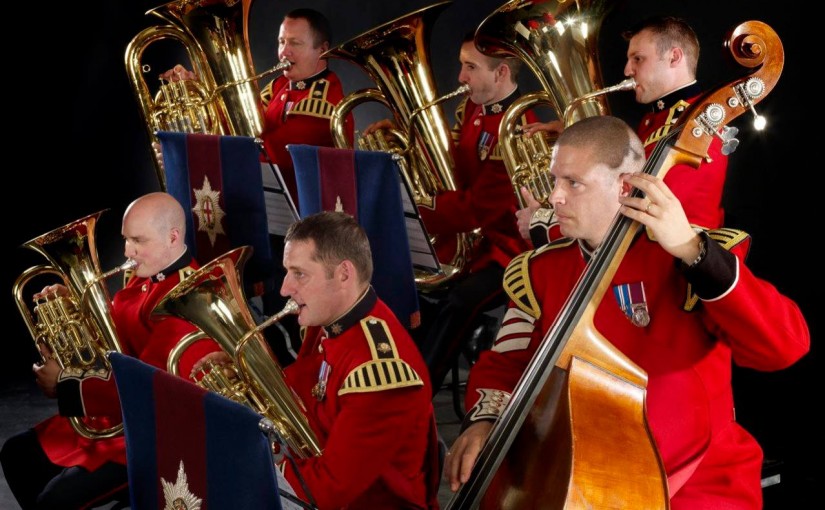 “Sometimes in the great soundtrack of our lives there are no words, there are only emotions; I believe this is why God gave us classical music.”

I’d like to say that I came up with that quote myself but I would be telling a lie, it is an anonymous saying that, I believe, sums up classical music perfectly. I don’t have endless shelves full of classical recordings (in fact, I only have a handful of releases) but the fact that this music can hold people in rapt attention, sometimes hundreds of years after its composition, is testament to its enduring popularity.

Personally, I’ve always been fascinated by brass instruments and brass bands, ‘Trumpet Voluntary’ one of the first pieces I can actually remember hearing and it still raises the hairs on the nape of my neck today. Brass Bands were central to Yorkshire mining communities (and still are to this day) and I grew up with Colliery bands thanks to my Great Uncle who lived in Sheffield.

Listening to the amazing last few albums by Big Big Train, I was struck by the brilliant brass playing on tracks such as ‘Victorian Brickwork’ and ‘East Coast racer’ and it led me to investigate further into who the brass players were. Dave Desmond led the Band of The Coldstream Guards who appeared on ‘The Underfall Yard’ and helped to make it such a memorable piece of music. One of the other musicians who played on the album, and the at the subsequent live gigs at Kings Place in London, was John Storey, celebrated euphonium player and well known in his own right. John, previously the principle euphonium player with the Band of the Coldstream Guards, is now the euphonium and trombone player with The Band of the Royal Logistic Corps. After becoming a member of his first band at the age of 8, he joined The National Youth Brass Band of Great Britain at 16.

John studied music at the University of Huddersfield and joined the James Shepherd Versatile Brass. After graduating in 1997, John joined The Band of the Coldstream Guards as principle euphonium and was privileged to play at many state occasions such as Trooping the Colour and the Festival of Remebrance. John has featured as soloist with the band in the UK, overseas and on a number of the band’s recordings.

In addition to his career with the Army, he has been very much in demand in the brass band world for many years performing with , amongst others, the Beaumaris Band.

in 2012 John Storey released an album with the simple title of Euphonium and it is that record that I have the pleasure of reviewing here….

Opening track O Waly Waly is John’s instrumental take on the Scottish folk song which harks back to the 1600’s, better known as ‘The Water is Wide’, it is the first track to feature the Seindorf Beaumaris Band. Gentle and uplifting, John’s euphonium is the definite centre of attention here taking the lead and guiding you through the story. With a real pastoral feel, it has touches of that famous soundtrack to a Hovis advert (ee, when I were a lad!) and has a wonderfully calming persona that just leaves you adrift in your own calm oasis. The beautiful playing just brings a lump to your throat as the backing musicians join in unison as it rises triumphantly before coming back down to the land where it belongs. The next track is The Flower Song from Carmen, the delicacy being added by the tender piano playing of Annette Parri. John’s playing is restrained and cultivated giving this well known and exquisite song a different perspective, as euphonium and piano combine to deliver a quite magical scene. Sat in a sunlit room with my head clear of everything but the music, it is quite a liberating and transfixing experience.

Joining John on Mozart’s Concerto for Euphonium and Woodwind Octet is The Inner-City Woodwind Ensemble, this jaunty classical masterpiece is played excellently by these musicians. A quite delicate piece of music is handled gracefully and with gravitas and you could just close your eyes and imagine you were transported to a stunning baroque music hall to hear it in the setting it deserves. An agile and refined aura surrounds the tune as it flows perfectly through and around your mind, at the same time enriching and inspiring your soul. The Beaumaris Band join John again on Variations on Rule Britannia, full of as much pomp and circumstance as any one person could ever need, it runs the rule over some different perspectives of the famous tune. Running in at over eight minutes I did wonder if it maybe a tad too long but you just seem to get lost in the complexity and delight of some utterly expressive musicianship. When the instantly recognisable notes ring out it is a metaphorical salute to our mother nation and the pride that comes with it. Utterly over the top in its ceremonial elegance but utterly fascinating and enjoyable too.

The next track is from the famous English composer of works for brass bands, JohnGolland, Peace features the ethereal Harp playing of Dylan Cenyw and is a sublimely emotive piece of music. Seemingly simple in its delivery, there is a subtle depth of artistry and passion running throughout. John plays his instrument with a gentle touch, matching the finesse of the harp and just leaving you struck dumb with admiration, as fine a piece of music as you will hear anywhere. The three movements of Rolf Wilhelm’s Concertino for Euphonium sees Annette’s piano return. Another wonderful melodic journey through your mind and soul, restful and relaxed, it leaves you with no cares in the world as they lightly skip through Allegro ma non troppo, a humble and unpretentious musical journey through a sun drenched, sepia tinged forest glade. Andante ma non troppo feels  more melancholy and dispirited, the ability of the musicians to convey feelings is perfectly realised here, John’s wistful playing matches the slightly trite piano perfectly and leads your emotions along the same path, contemplative and with a sense of longing. That plaintive feeling lifts with the jaunty opening notes of Moderato con animo, the dancing piano and animated euphonium feel like they are talking to each other in a spirited conversation, captivating and absorbing. John plays his heart out here, every note is like a precise synaptic shock in your brain and across the three parts of this spellbinding piece of music.

John really gets to stand tall and shout from the rooftops on title track Euphoria, a celebrated work by Rodney Newton. Using the Big Big Train analogy it really has sense of animation to it, like a steam train on an express journey, full of the essence of life as it charges on like an engine with its own soul. With no other instrument to provide accompaniment or hide behind, it is here where the absolute skill and expertise of John Storey comes to the fore and he doesn’t hide behind anyone’s bushel, this guy has an abundance of talent. Now to perhaps the most accomplished and, in my mind, the most interesting track on this release, Concertino for euphonium and string quartet sees The Cassian Ensemble add their distinguished playing to Steven Rockey’s work. Ten minutes of magnificent interplay between John’s euphonium and some meticulously refined strings left me feeling wholly inadequate in the skill set that I have amounted through my life. An elaborate orchestral journey that takes you by the hand and takes you right into the core of it. The music is that intense that you cannot try to do anything else while you listen to it, to get every nuance and subtle gradation you need to stop, sit down and immerse yourself entirely in it, only then does it all come together and make complete sense. As you come to the end of the journey and open your eyes, the world seems to make a lot more sense.

The final track, ‘Neath Dublin Skies has John and the Beaumaris Band take you on a musical trip that has all the elements of a night in Dublin. A haunting air opens the piece and it moves into a fast paced jig where John delivers an intricate, foot tapping Irish reel. That low key opening returns, sombre, tender and hushed, you find your breathing becomes slow and shallow as a poignant horn takes up the reverie, sentimental, touching and nostalgic, yearning for yesteryear. A sustained repeat of the lively, energetic jig increases in tempo, getting faster and faster before all comes to a close with a spirited flourish.

I came upon this album by way of a quite obtuse route, I listen to the odd classical release but it is not really my forte. I absolutely love the brass playing on the Big Big Train albums and that led me to want to hear John Storey’s release. Well, am I glad I did, it is a fine piece of music that I keep returning to every now and again, like an old friend whose company you instantly know you will always enjoy. Should you take a leap of faith and listen to something you wouldn’t normally consider? In one word, yes!