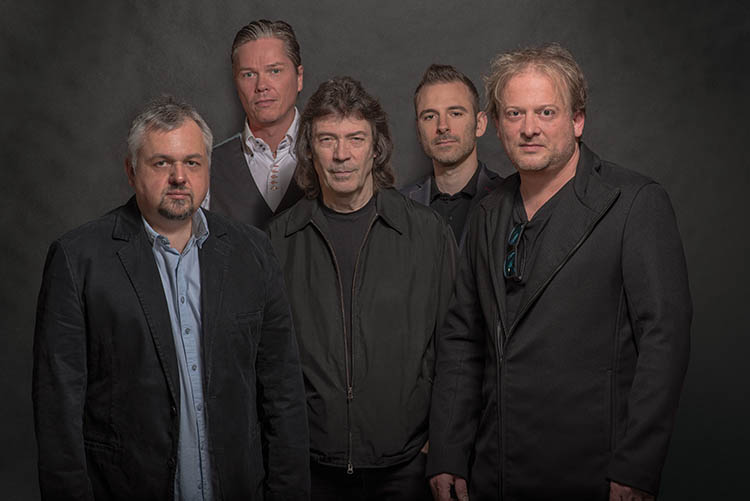 Hungary’s world-renowned Jazz Fusion/world music ensemble Djabe have been working with one of England’s finest guitarists, Steve Hackett, since 2003 when he guested on their album ‘Sharks are Dancing’, since then they have recorded and toured across the world together, improvising and freewheeling.

These two CD/DVD packages are taken from two different tours, with the first ‘Summer Storms and Rocking Rivers’ recorded in Hungary in 2011, the CD is the live document, while the DVD is a fleshed-out release with more songs than there was space for on the CD. This, with an additional documentary and a couple of bonus tracks, showcases what this whole tour was about.

This is all about 6 musicians, incredibly talented and versatile, getting into the groove and proving that music can cross borders, languages and transcend styles.

The concert is a case in point, as Djabe (Ferenc Kovacs – trumpet, violin, vocals, Zoltan Kovacs – keyboards, Attila Egerhazi – guitar, percussion, Tamas Barabas – bass & Szilard Banai – drums), along with Steve, play a wildly diverse musical mix of Steve Hackett songs (Ace of Wands, The Steppes, Horizons – all reinterpreted and improvised around) and Djabe material (City of Habi, Butterfly, Scenes – Above Poland, Scenes- Sunset at the Seaside), all mixed up and interpreted wonderfully here.

Djabe’s fluid and taut playing allows room within the songs for Steve to improvise and you get the impression that all 6 musicians are having a ball, there’s even room for radical interpretations of a few classic Genesis numbers (Firth of Fifth, Los Endos, In the Quiet Earth) all played around with, built upon and incredibly different from the source, making this fun and exciting. It captures what was a very special evening of music and of the joys of making music without boundaries, genres or people asking whether or not it’s ‘prog’.

You don’t need to pigeonhole it, just enjoy it. Life Is A Journey – The Sardinia Tapes

‘Life is a Journey – The Sardinia Tapes’ was recorded and improvised in Sardinia in 2016 by Steve and the Djabe line-up of Tamas Barabas, Attila Egerhazi, Guli Briem (drums, percussion) and Aron Koos-Hutas (trumpet) and was the first time the musicians had simply spent time in a room, improvising, jamming and writing new material, rather than just playing live on stage.

The double set here has the album on CD, and a bonus DVD of the album in stereo and surround mixes, 5 tracks recorded live in the Budapest Jazz Club in 2017 and a short documentary.

The album itself is one of those rare beasts, an album you know nothing about, and have no pre-conceptions about. Knowing how Steve Hackett mixes his music making up, flitting from classical, to progressive rock to revisiting his past, you’re never sure where he’s going next. Djabe are an impressive improvisational group and, working with Steve, you can tell from listening to this album, they have built up a brilliant working relationship and revel in each other’s musical company. This comes across the 72 plus minutes of this album.

It is a complete revelation, and whilst I can completely understand why Steve preforms and releases the ‘Genesis Revisite’ concerts, I much prefer this side of his musical coin. The improvisations here are fluid and free forming and come from the same musical space, a shared appreciation and mutual admiration of each other’s talents. The way that Aron Koos-Hutas’ trumpet weaves its way through tracks like Golden Sands or Wake Up is revelatory, while the work they put in to songs like Life is a Journey or Beams Over the Nulvi Mountains are sublime.

This mixes, matches and blends genres and styles seamlessly. The reason why the songs work so well is because each musician knows intimately what would work where, and why, and this freedom makes this album immersive and rewarding. With every listen something new is teased out, a motif here, a drum roll there. This is an album that rewards repeat listens, and with the way it ebbs, flows and builds, it doesn’t feel like it’s over an hour of music. It feels like it’s as long as it needs to be.

It’s albums like this that prove to me why Steve Hackett is still the most innovative and creative former member of Genesis out there, not content to rest on his laurels and still following his muse and, in Djabe, he has found fellow travellers more than happy to join him on his journey.