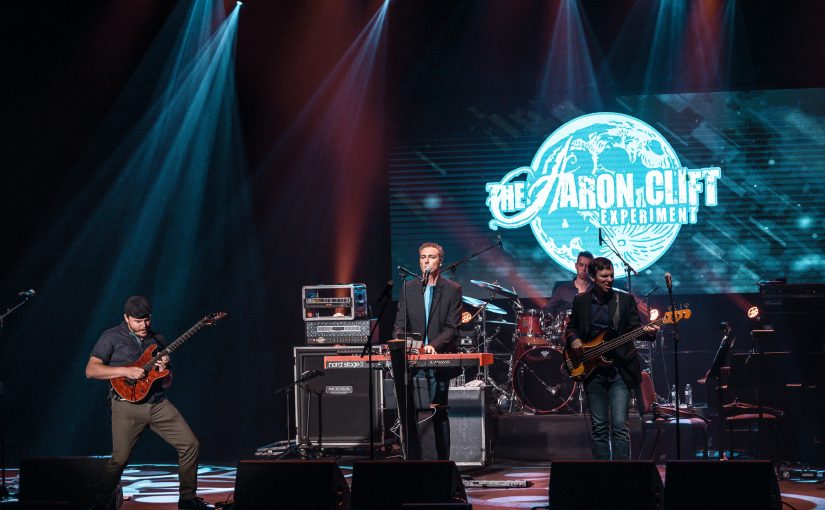 “Intricate and subtle yet with raw passion at its heart, The Aaron Clift Experiment is one of the most exciting and interesting bands currently writing and playing music today.”

Now, I said those words about The Aaron Clift Experiment’s debut album from 2012, ‘Lonely Hills’ and the band went from strength to strength with their impressive follow up, 2015’s ‘Outer Light, Inner Darkness’ that increased the quota of high energy hard rock based progressive music.

2018 sees these Austin, Texas natives deliver their third album, ‘If All Goes Wrong’ and, after the increasing promise of the first two albums, it was one I was very much looking forward to hearing for the first time… Formed in 2012 as the solo project of Aaron Clift, the band has since blossomed into a powerful live group.  The group’s multi-faceted sound is an innovative blend of classic rock, modern rock, and classical all anchored by the band’s dedication to high-quality songwriting and musicianship.

Its last two albums, 2012’s ‘Lonely Hills’ and 2015’s ‘Outer Light, Inner Darkness’ were critically-acclaimed progressive rock achievements, landing on several year-end best album lists.  In 2017, the band had a star-making performance at RosFest, one of the largest progressive rock festivals in the world.

The core members are Aaron Clift – Vocals/Keyboards, Devin North – Bass and Tim Smith – Drums and Percussion and the new album sees contributions from some of the top guitarists in Austin, Van Wilks (a Texas blues and rock icon), Arielle (a student of Brian May of Queen and collaborator of legendary guitarist, Eric Johnson), and Dave North (of Austin psych rockers, The Cuckoos). What I’ve always found with, and loved about, The Aaron Clift Experiment is the rock element to their music, varying from hard rock to a very fluent blues guitar style, it gives them a quite unique sound and added to Aaron’s husky and raw vocal delivery, you wouldn’t mistake them for anyone else.

The first two songs on this new release, Faith and Last Crash are full of that harder edged riffing guitar and dynamic drums that combine to give a high energy delivery. Where the former is upbeat, the latter has a darker hue to it, Faith taking cues from many almost balls-out rockers. You immediately get into the band’s mindset and groove with this really invigorating, raw feeling song. Last Crash subtly builds up the tension with some excellent synth and bass guitar work before a driving riff and high octane drums give it that impending feel of apprehension. Aaron delivers an immediate vocal, impassioned and edgy and the squirreling guitar breaks really add some zeal and animation to the organised chaos.

The band take on a more pastoral and progressive style for  Absent Lovers, a delightfully wistful opening blossoms into a compelling tour-de-force that ebbs and flows irresistibly throughout. The organic synth sound adds a real 70’s aura that blends perfectly with vocal harmonies and potent guitars to take you on an enthralling musical journey. Remember Ben Folds ? The truly addictive vibes of Better Off Before certainly remind me of that piano heavy, almost pop-prog sound. It’s a real feelgood sounding song with a a not particularly upbeat subject. A Brian May-esque guitar sound and the energetic rhythm section give it real polish and gloss and make it one of my favourite songs on the album.

Funky guitars, swirling keyboards and high-tempo drums all combine to give us the jazz-fusion intro to another grin inducing track. Castle In The Sky takes what I would call the signature Aaron Clift Experiment sound and adds even more zest and vivacity to deliver a high energy song full of catchy hooks and intricate melodies and one that showcases the musician’s skills perfectly. Have you ever wondered what would happen if Aaron Clift met King Crimson and they jammed together? Well, wonder no more for Savage In A Fancy suit will give you the definitive answer to that (never asked) question. An almost disorganised, chaotic frenzy of riffs and caustic Hammond Organ notes entwined with staccato drumming and a discordant bassline. It shouldn’t work really but it does and what a thoroughly enjoyably manic track it is.

Returning to the elegant and nostalgic pastoral tones, Dream Within a Dream is The Aaron Clift Experiment at their progressive best. Melancholic undertones give a pensive and sombre atmosphere to this impressive song. The music has an anticipatory feel and Aaron’s vocal almost pleads into the microphone. An intelligent and immersive eight minutes of music that hits the highs but also has an underlying seriousness that makes you take in every nuance and subtlety, oh and the guitar solo that closes out the song is pure genius! Fiery, edgy and with an almost pop-punk feel to it, Wild Hunters is an aggressive, lively and spirited track that fills a hell of a lot into its sub three minute running time. It’s almost like it rocks up, slaps you in the face, kicks you in the knee and then disappears into the distance laughing manically.

The final track on the album is a wonderful piece of music that just oozes class, warmth and emotion. Title track If All Goes Wrong really gets under your skin with its mournful vocal and elegant string-like synths. There’s a beauty to be found in its sorrowful and forlorn quality, the guitar solo just bleeds a melancholy passion that proves there is allurement even in sadness, it is a fantastic finish to the album.

‘If All Goes Wrong’ sees this impressive ‘Prog Ensemble’ rise to even higher heights. I’ve been a fan of The Aaron Clift Experiment since I heard their first album nearly six years ago and, like a fine wine, they just mature and get better and better as time goes on. They’ve enriched and diversified their already impressive songwriting and musical skills to make them one of the most impressive progressive acts currently on the scene.

If All Goes Wrong Pre-order Campaign