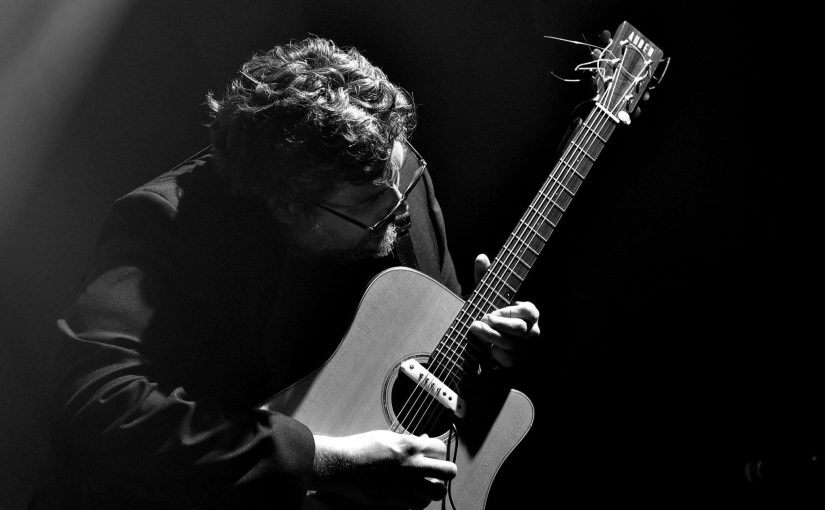 A few years ago an unlikely hero entered the rock music scene. Like some sort of Rock ‘El Mariachi’ Matt Stevens rode into town armed only with a guitar, a few effects pedals and most importantly a prodigious talent and imagination. ‘Have guitar, will travel’ was his trademark, travelling right across the country willing to play any club, pub and venue, supporting any and everyone. Unbounded by any labels and by any notions of conforming to musical norms Matt Stevens’ music crossed many boundaries, but did not seem to fit any – just the way he liked it.

Roaming the musical hinterlands he was free to take his own path. Occassionally, venue’s saloon doors would swing open and in would step the silhouette of a musical man mountain maestro with a guitar slung around his neck, here to take on all challengers with fast fingers, exciting music and engaging charm. Venue after venue and crowd after crowd succumbed to his talent, won over by his talent, enthusiasm and his unquenchable thirst just to perform. Well now, Matt ‘Mariachi’ Stevens is stepping back from his solo guitar days, having formed his own posse called ‘The Fierce and the Dead’ within which to express his impressive musical skills and imagination. ‘The Fierce and the Dead’ have been burning their own distinctive and unconventional path through modern music, turning up at contrasting music festivals such as ‘Summers End’ and ‘Arc Tangent’ and uncompromisingly blasting and riffing their way through the crowds, a few scattering to the bar but burning in to the hearts of many other unsuspecting punters. This set is NOT a retrospective drawn from Matt Stevens’ already released albums, ‘Echo’, ‘Ghost’ and ‘Relic’… that would have been too easy for this artist, who wanted to share a document of his live solo recordings. It is comprised of a live guitar and loop set recorded in a church for the Farncombe Music Club in 2014. (What a different experience in church that must have been!) Alongside those pieces Matt has included two ambient pieces (Intermission 1 & Intermission 2) and two ‘lost songs’. The marvellously named ‘Pecadillo’ was produced for a compilation released on the Believers Roast label of Kavius Torabi (Knifeworld) in 2012.  ‘Blue Filter’ is an out-take from the recordings of Matt’s 2010 album, ‘Ghost’.

What can someone unfamiliar expect from this album?

Well, one can expect to hear a bewildering array of sounds and textures somehow conjured up from just a guitar and some looper technology.

What may be harder to imagine is the kaleidoscope of sounds and feels that splash sonically out of his guitar, cascades of riffs and melodies interweaving and echoing in a captivating tapestry of noise. This reviewer is not usually taken with purely instrumental albums – it’s just usually not my cup of tea (or glass of tequila). However, Matt Stevens is not your usual purely instrumental artist and I am glad I imbibed in this intriguing offering. Opening track ‘Rusty’ (where does he get these names from?) immediately hits you with a torrent of riffs and echoes with intricate playing and sounds it does not seem possible to extract from just a guitar. As a manifesto for the album it certainly lets you know this is no ordinary musical ride. In contrast, later track ‘ A Boy’ is a much gentler acoustic glide which beguiles and shows that there is a range of musical colours described here. Amongst other highlights ‘Big Sky’ takes you right out there on the ‘Looper Plains’ as coruscating clouds of echoing lines scud across the musical firmament, before being gently brought down to earth and then once again in a psychedelic coda launched in to a reverb filled sky – at least that’s what I imagined… and all done by one guy and his guitar live! Reviews are peculiar things – one never knows quite in what direction it will go. Before I even started on this review, knowing a little about Matt and his music, I decided to use the ‘El Mariachi’ theme as it conveyed his singular and somewhat heroic musical path, and captured the idea of ‘a loner with his guitar’. What I had not expected to find was a song on the album that perfectly captures that imagery – the aforementioned ‘Blue Filter’ is pure spaghetti western, even with effects sounding uncannily like a horse trotting.

It is a perfect way to effectively finish the album as our Mariachi guitar maestro decides to hang up his solo guitar for the time being and strides off to continue exploring other musical horizons (and upsetting a few along the way!) with his posse. Maybe one day he will return to a venue or saloon near you with his guitar slung around his neck but for now listen to this and imagine his legendary live solo days.