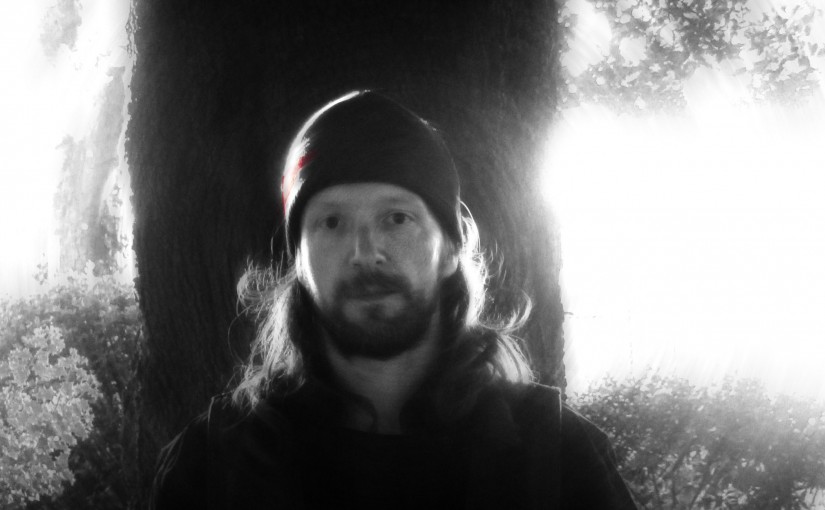 I continue to be drawn to clarity and simplicity. ‘Less is more’ remains my mantra – Stephane Rolland

My mate John Bassett is like a one man music factory. If he’s not making prog-tinged psychedelic albums with the brilliantly named KingBathmat or the seriously heavy and melodic instrumental colossus that is Arcade Messiah, he’s laying down some more personal and intimate tracks as a solo performer.

John’s last solo outing under his own name was the sophisticated restraint of the uncomplicated ‘Unearth’, released in March 2014 and I had this to say about it:

It is a shining beacon of simplicity in an over-complicated world and an antidote to the ponderous, heavy and dull music that can clog up our airwaves in this industrial age.

With no fanfare or previous promotion, John announced he was releasing a four track E.P. called ‘Aperture’ and, in his typical humble style, he had this to say about the recording process:

It only took me 10 days to make it from nothing, which is some difference to 6 months to putting together the last arcade messiah….

Now, if another artists has told me it had taken them less than two weeks to make a record, I’d be either worried or very sceptical, but not John Bassett. I was pretty certain that he would have produced something quite brilliant as usual…. The E.P. opens with Break The Wall, the intro to which is a bewitching brew of jangling guitars, all immediately recognisable as being John Bassett. The drums and bass join in what is quite a whimsical and wistful melody and then the vocals begin. Yes, vocals, I’d been so used to the power and pomposity of the instrumental only Arcade Messiah that I forgot that John has quite a delicate, yearning voice that works perfectly with the clarity and purity of the music. The whole song has an openness at its core and I find it emotionally cleansing as it carries my worries away, yep, I was right, John doesn’t do ordinary or mundane, this is sheer class.

There is a haunting feel to the opening of Joy In Despair, an all pervasive feel of hushed restraint to the pared back music and John’s guileless vocal. The fog of uncertainty begins to lift as the rhythm section opens up, there is a chink of light appearing in the misty gloom. There is an undercurrent of nostalgic melancholy running throughout the song, a feeling of whatever will be , will be that manifests itself as stoic fortitude and the track closes out with a very stylish guitar run, near perfect. Awaiting has a slow burning opening, a low down guitar and vocals full of longing are accompanied by an expressive bass, just lulling you into a state of dignified solemnity. The chorus is all breathy vocals and a stand out guitar note that lifts the tempo slightly. A thoughtful guitar solo is laced with feeling and sentiment and you well up with emotion, a superb thought provoking track that left me in a reflective state of mind.

The final track on the EP is the delightfully eclectic instrumental Jenna. Sepia tinged memories flood your mind as the plaintive and longing guitar leaves wishful notes on your mind. A meditative and unhurried track of musical rapture that cleanses your mind and soul to leave you in a calm state of well being.

There is a beauty and grace to ‘Aperture’, John  can do immense walls of sound in his sleep but, this time, he shows he has a gentle and rarefied touch to deliver a small and perfectly formed musical gem. Any negatives? yes, just one, it’s not long enough…..

Listen to ‘Break The Wall’