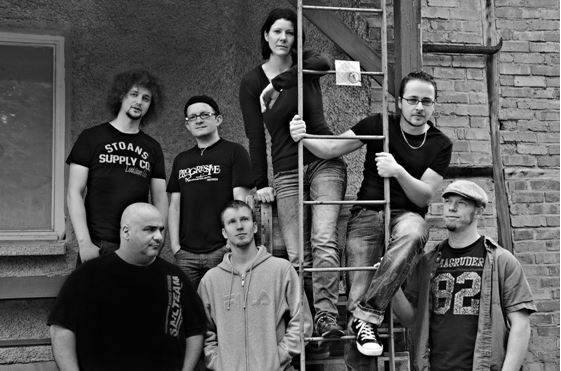 Here is the second guest review, this time by Rob Fisher. I will make no secret of the fact that I am a long time admirer of the truly remarkable Seven Steps to the Green Door. From the double award winning debut album ‘The Puzzle’ (2006), to the tour de force of inspired musical excellence embodied in ‘Step in 2 My World‘ (2008), to the beautifully crafted and lovingly composed journey that is               ‘The?Book‘ (2011: complete with painted nail in the CD release!), this seven-piece band from Germany always produce music which probes the boundaries of intelligence, passion and vision.

After a four year wait, they return with ‘Fetish’, a 78 minute musical tsunami which is simply breathtaking. The first listen, at times, can feel a little overwhelming. The music is alive, vibrant, full of energy, dynamism and joy. Full credit here must go to the superb arrangement and mixing by new guitarist Martin Schnella (guitar, bass, backing vocals) and excellent production values which allow the music to breathe in a revealing sound stage where each and every instrument is wonderfully transparent and quickly discloses the technical mastery and superb musicianship of the band.

Once you recover from the powerful initial impact, subsequent listens are a joyful revelation which repeatedly speak to something quite special being offered here in the perceptive and insightful writing of Marek Arnold (keyboards, sax) and Ulf Reinhardt (drums). There is a rich diversity of musical styles and creative segments that are thoughtfully sequenced and carefully fashioned to present an overall musical experience which is abundant in subtlety, nuance and finesse. Again and again you find yourself being engaged, being drawn in to so many different emotional journeys and captivated by the mesmerising ebb and flow of the   story which is unfolding in each track. As with previous albums, you are left in little doubt that this is a work of commitment, care and, ultimately, of love, it shines throughout the album and carries you along from start to finish.

What is, I think, noticeably different with ‘Fetish’ is the emerging (and quite rightful) confidence of the band to evolve their style where technical discipline flows hand in hand with joyful exuberance. The SSTTGD ‘sound’ from previous albums is alive, well and utterly unmistakable but this release gives it a new context in which to shine as a result of which, something new and much more profound emerges. From the very beginning, two things are immediately noticeable. First, this is an album built around exquisite vocal work. The voice as instrument becomes the focal point for everything else and off which everything else finds its place. Anne Trautmann is sublime in the range and quality of expression she brings to the material. She is joined by Lars Köhler who brings just the right tonal counterbalance and, in a guest appearance, the unmistakable Arno Menses from Subsignal. Together they give us a staggering range of performances which are a joy to hear. From the almost monkish purity of the opening 34 second track Possible Delayed (reprised at the very end of Ordinary Maniac), the fine interplay and layered harmonies of Still Searching (track 3) and the haunting melodies of Inferior (track 4) this album excels because the voices take centre stage, not as a dominant tool which drowns out the others but one which takes its place alongside them and by doing so enables them to become so much more.

Indeed, this leads to the second noticeable feature of the album: the quite brilliant orchestration of the band to build complex and interweaving crescendos that are full of presence, depth and inventiveness. With guest contributions from Steve Unruh (UPF), the foundations are set by controlled, unswerving and menacing guitar work, occasionally unleashed to soar, sweep and ascend to new heights. This is underpinned by driving, ambitious and atmospheric bass work (Daniel Mash of Machine, UPF and ex The Tangent guests). The drums beat out an assured and masterful array of rhythms, full of authority (with additional percussion from Justo Suarez). Keyboards join and swell the building soundscape, enriching the atmosphere and lifting the mood whilst the vocals combine to bring poignancy and emotional bite.

This is a band at the very top of its game, giving us music of the very highest calibre. It is a remarkable album which will surprise, astonish, captivate and delight; spending time with it only increases your awareness of undiscovered depths and hidden treasures. Enjoy it: and let us fervently hope we don’t have to wait another four years for the next instalment on this band’s remarkable journey.

About the author – Rob Fisher “Rob is a former academic and Head of Philosophy who is passionate about prog, scifi, wine and a curious array of US sports. He presently directs his own company which focuses on interdisciplinary events and publishing.”