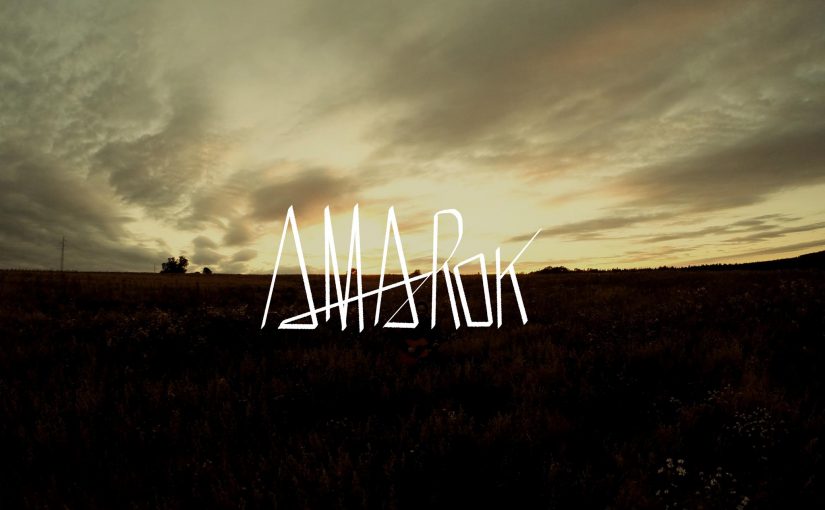 I have no qualms in pushing bands that are new to my ears. The plethora of talent around at the moment is wonderful to behold. I don’t wish to detract from the older bands of my youth and still love and listen to the music I grew up with, but more and more I find myself checking out the new kids on the block (no, not the boy band) as they truly represent a progression in the genres. Everything can go in the musical blender and come out in the mix and though not all of it works and won’t appeal to everyone, there should be something you will find to your taste in there.

I personally feel this is the best time since the 70’s for new music and like an addict I devour neoteric tunes and the bands that make them, trying to sate my appetite. Whilst I am time poor, the chance to review some of these releases is an opportunity I relish and, with a couple of exceptions, have been lucky to like most of what I’ve heard.

So it came as a surprise to me when I agreed to review Amarok‘s album ‘Hunt’, that it is their fourth release and I have not heard them before. Mr Hutchinson sent me this after suggesting it could be in the running for album of the year, so high expectations. Essentially a project of the very talented Michal Wojtas, from Kielce in south central Poland, who sings on five of the tracks and plays a number of instruments (guitars, harmonium, keyboards, audio samples, percussions, electronic drums, theremin, low whistle), he also has other invited artists contributing on various tracks. Michal credits Jean Michel Jarre and Mike Oldfield as being particular musical influences on him and their inspiration can also be felt throughout.

Now there is something about Polish artists, the beautiful, melancholic melodies they create resonate with me and some people will find obvious comparisons to another very popular Polish act, but that would be to denigrate the talent here. The further into the album the more the music spreads and occupies different genre spaces. At the heart of the album the lyrics deal with trying to retain our individuality against the social media and powers that be, who try to conform us whilst distorting the truth to their own ends. After giving this a number of listens I don’t think Michal will remain Anonymous for long as the throbbing pulse of the first track ushers us into his musical world. Pawel Kowalski plays drums on this and most of the tracks on the album, adding to the rising rhythm, with Marta Wojtas filling the sound further on wavedrum as she does on a number of tracks on this album. I’m already hooked as the track mounts to a crescendo with driving guitars and relaxes again in Michal’s vocals to the close.

The incomparable Mariusz Duda lends his delicious vocals to second track Idyll, ably backed by Konrad Pajek. I make no apologies for waxing lyrical on the magic Mariusz’s vocals bring to this or any tune, as it builds gently in mouthwatering layers and he gilds it to perfection. Guitars weep with joy and rippling keys sing, growing as a field of colourful blooms, resplendent in their gilding.

The echoing keys of Distorted Souls haunt us gently, with skittering electronic distortion bouncing between the speakers and staccato drum beats jabbering away under the wistful vocals from Michal Wojtas with an earworm of a chorus. We are then caressed by a wonderful theremin passage midway which serves to accentuate the impactful ending of heart torn guitar strings and keys on what is yet another beautiful track.

We are only three tracks into this and I am sold.

The eerily stunning Two Sides, played mostly on the Duduk (an ancient double-reed woodwind flute made of apricot wood, indigenous to Armenia, for you fact lovers) by the gifted Sebastian Wieladek, blows gently through your ears like a warm Scirocco across a moonlit desert as you lay and watch the stars twinkle in an endless sky, the sound echoing away into the distance, leaving you entranced.

The twisting rhythm of  Michal Wojtas’ harmonium breathes in and out on Winding Stairs, with sampled noises and Pawel Kowalski’s percussive beats dancing back and forth. Michal’s gentle voice soothes and muted guitar flurries strain in the distance gently pushing to the fore, contesting the harmonium on it’s last breaths.

An aggressive, distorted riff blasts you out of your reverie and tribal beats kick in, the guitar stuttering and lurching in and out, bouncing between speakers. Delicate swathes of keys wash on the pounding rhythms as they resonate In Closeness with your increased heartbeat whilst Michal Wotja’s whispering vocals hold it all together.

I love emotional guitar solos and Unreal cries to my very soul as Michal Wojtas bends and slides the frets on mournful waves, underpinned by Michal Sciwiarski’s eddying keyboards. Quite simply bliss. A different voice softly accompanies the keys and synths on Nuke, courtesy of Colin Bass guesting on vocals, harmonising seamlessly with Michal Wojtas. Steadily and subtly building the music expands, widening the sound to arena proportions with another sublime guitar solo slipping in before the end of this, the penultimate track.

The title tune plays us out starting with the lector narration from John England adding a conceptual feel to Hunt. At just under eighteen minutes this could be classed as an epic musical story, with splendid keyboard passages and samples emulating Michal Wojtas’ quoted influences. Once again there are some fine guitar solos that swoop and fly between Michal’s wonderful vocals. John reflects on questions we should be asking and if can we stay true to ourselves avoiding the pitfalls of a virtual world where hidden people covertly hunt out our personal details for their own benefit, before the album is dramatically brought to a close as a crying guitar collides with the sounds of hammered metal.

Those of you who have read any of my past reviews know I often try to string a storyline through an album in an attempt to illustrate the tunes and catch your attention. I can’t with ‘Hunt’ as every time I listen I’m drawn in and have trouble concentrating as I become immersed in the glory of it all.

I apologise for not hearing of Michal Wojta before and I don’t want to gush, but Martin asked the question, ‘could this be a contender for album of the year?’ The answer is probably not. No reflection on the album but like myself, I am sure Amarok have not been heard by the majority of people.

So I feel a desperate need to redress this balance with what little influence I have, please listen to this album because if nothing else it is most definitely one of my contenders for album of the year.

Amarok are tremendous, let’s give Michal Wojta the recognition he deserves.