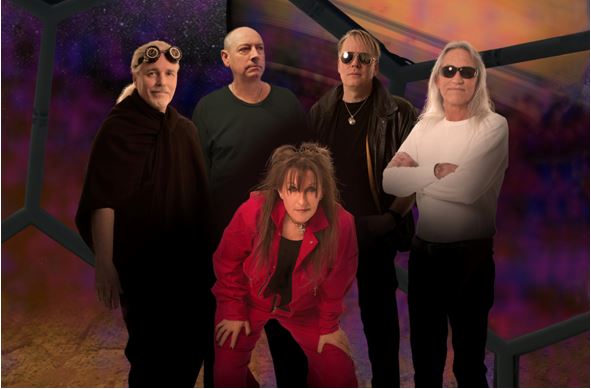 After his great review of Seven Steps to the Green Door, this time Rob Fisher passes his practiced ears over ‘Reya of Titan’ by Gekko Projekt. The art of good storytelling is notoriously difficult. Telling a story in, and through, music raises that bar even higher. And when the music is prog and the story is a work of science fiction it would appear the odds of success become almost impossible. Yet this is exactly what ‘Reya of Titan’, the second release from Californian based band Gekko Projekt, attempts to do – and does so with no small degree of style and panache.

The key is to understand exactly what this project is and consequently what it is you are listening to. Is it a concept album? Is it a rock and/or space opera? Actually, it really doesn’t matter, it’s a story and one which has been carefully considered, lovingly crafted and then beautifully expressed through a mesmerising array of diverse musical styles, changing rhythms and exciting musicianship.

This is dramatic storytelling at its very best where language and music come together to create a thoroughly enjoyable performance. If you want to call it anything, dramatic musical theatre would be perfect and certainly something you would want to go and hear from start to finish.

Indeed, this is exactly how you need to approach the album. The tale of Reya Jones requires a certain degree of concentration and, just like picking up a book, skipping a chapter here and there won’t work. There is important world-building taking place in each track and dipping in to odd tracks means you will literally lose the plot.

A careful glance at the 13 track titles confirms this: there is a well planned logical progression to the performance which drives the plot from Reya’s initial leaving earth behind and going on to do asteroid mining, the accident which forces her into a spacesuit and consequent abandonment for 24 years on Titan, the arrival of help and the promise of rescue,which she eventually rejects, and, in light of which, she stays and becomes Titan’s Queen.

Some tracks are even crossed referenced inside each other (for example, the Snow White reference reappears in North of Titan). The lyrics have been constructed with care and attention to detail so as to take us on the journey with Reya and, in the process, they make it easy for us to be fellow companions on the voyage. However, the lyrics are only one element of the journey. The tremendously skilfull and, at times, deeply emotional music brings the story to life and envelops us in grand musical flourishes, changing tempo’s and alternating rhythms. The instruments playfully interweave with, and skilfully play off, each other, working in tandem with melodic and soulful vocals to paint vivid and provocative moments in Reya’s journey.

Each instrument gives off a bewildering range of tones and sounds, testament indeed to inventive and hugely talented musical accomplishment. Even more than this, each track itself is a unique musical style, giving you something different as it drives the story forward. It is a remarkable achievement and the band rightly deserve high praise for what they have achieved in creating this wonderful and insightful performance piece.

The absolutely beauty of ‘Reya of Titan’ is that, in the end, it gives you absolutely no choice but to get caught up in and carried away by the often scintillating musicianship on offer.

Peter Matuchniak (Mach One, Evolve IV) on guitars is a revelation throughout; 3 minutes into Snow White is the most delicious riff which will blow you away, unexpected as it is uplifting. Rick Meadows on bass (WZMG, Coot) is spellbinding; Frienda is an absolute joy, the jazzy lilting bass driving the music.

Vance Gloster (score for ‘The First Time’, WZMG, Coot) on keyboards lays down so many rich textures which permeate through each and every song. The synthesizer work soars above, and lends a clarion call, to the story whilst the Hammond growls away as the foundations which under-pin everything else.

Alan Smith on drums is the focal point of everything, orchestrating the movement and momentum of the story’s plot, astounding on Jovian Belt and 24 years of Solitude. And JoJo Razor (Jo Blackwood Martin –  known for her work on The After Hours Electric Prog Jam on Cruise to the Edge 2014 and 2015) brings dramatic force and emotional depth to the vocals; Grains of Sand is a delight, her voice conveying the sense of being lost, the promise of redemption, of hope, of despair. What a performance!

‘Reya of Titan’ is not without weaknesses. The mix, in places, is unfortunately uneven with the drums, at points, being too prominent and the keyboards, at times, being a little too overwhelming and domineering. What would also have helped is some kind of insert which could have outlined the plot in advance of listening to it and a lyrics sheet so the story could be shared as we listened. But these, ultimately, cannot and must not be allowed to detract from what is a superbly creative, musically inventive and thoroughly enjoyable 50 minutes of excellent dramatic storytelling.