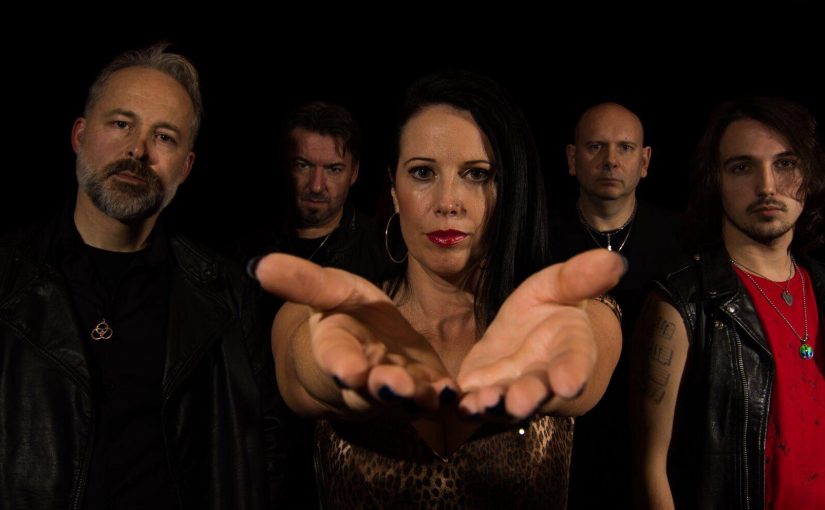 “I was ten when I heard the music that ended the first phase of my life and cast me hurtling into a new horizon. Drenched to the skin, I stood on Dunoon’s pier peering seawards through diagonal rain, looking for the ferry that would take me home. There, on the everwet west coast of Scotland, I heard it: like sonic scalpels, the sounds of electric guitars sliced through the dreich weather. My body hairs pricked up, each one a willing receiver for the Thunder-God grooves. To my young ears, the sound of these amplified guitars was angelic (although, with hindsight, I don’t suppose angels play Gibson guitars at ear-bleeding volume). A voice that suggested vocal chords of polished silver soared alongside razor-sharp overdriven riffs. I knew that I was hearing the future.”
― Mark Rice, Metallic Dreams

Good rock music has always appealed to me, not that bland soft rock rubbish but music with drive and ambition that rocks into town, blows everyone away and then leaves in a blaze of glory, THAT sort of rock music! Vibrant, heavy riffs, a powerful and dynamic rhythm section and gilt-edge vocals all combine to give a listening experience that is like a shot in the arm or a musical kick up the arse.

I spend so much time listening to, and writing about progressive and alternative rock that I rarely have time to listen to good rock music apart from when I’m running and I use it as a motivational force through the headphones. However, my friend Jane Gould joined UK rock band Iconic Eye last year and they have a new album out so it would be remiss of me to not spend a bit longer with ‘Into the Light’… Iconic Eye burst onto the rock scene in 2015 when they self-released their debut album, ‘Hidden in Plain Sight’. They leapt straight onto Jake’s Stage at that years Download festival, then on to support the Treatment at Rockingham’s Pre-party in the same year and then to Hard Rock Hell (HRH) in March 2016. A truly remarkable start! Since then the band has seen many changes and has also been struck by tragedy. However, the band refused to give up and made the bold move to become female fronted with the addition of the amazing Jane Gould. This change has lifted the existing songs and created the right environment for the band to start writing again.

The album title says it all. It contains 5 of the bands favourite songs from ‘Hidden in Plain Sight’; re-worked with Jane and Robin Mitchard (the bands new youthful lead guitarist) to the fore. Together with harder guitars from Greg Dean and a more aggressive mix, this is classic Iconic Eye, updated!

Added to these existing songs are 6 new songs, mainly written in partnership between Dean and Gould, but also with Mitchard adding to the songwriting credits on two of the songs. On the new recordings you also have ex Max Bacon and Dante Fox bassist, Michael Dagnall and on drums, Adrian Scattergood. This is Iconic Eye as it is now, and at its best. The album opens with two properly hard rocking tracks, Am I The One and You Make It are both edgy, fast paced and in your face, basically hard rock as it bloody well should be! Jane’s vocals are powerful and dynamic and lead the rest of the band in a merry roller coaster ride across these two energetic openers. The guitar playing is slick and dextrous with a couple of smoking hot solos from Robin Mitchard thrown in for good measure. I love the chorus on You Make It which rapidly becomes an addictive earworm and Greg Dean’s keyboard add a lush touch of AOR magic, I’m hooked already! Those Tears Won’t Last adds a huge dose of melodic melodrama to the music, soulful and full of passion with driving riffs and compelling drums. I’m detecting a touch of the legendary Anneke Van Giersbergen to Jane’s vocals, they really are that good, silky smooth but imbued with a deep seated power and fervor. The solos are coming thick and fast, each one iridescent and hard-edged and giving these tracks proper drive and direction. Jane and the band show us a sultry side with the heavily soul infused Let It Rain Down. A sensuous piano joins the vocals at the opening before the accelerator pedal is pressed and the intensity increases with a forceful riff and those all-powerful drums. Another chorus that is just asking for you to sing along with it and the emotions are just set free with the delicious guitar that closes out the track. Get the lighters (or mobile phones) out ready, Black Country Lady is a moving and hauntingly beautiful ballad come anthem and one that leaves a big lump in your throat. The elegant guitar and Jane’s elegantly melancholic vocals are stylish and wistful in equal measure. This is definitely going to be a live favourite and the band have the necessary chops to carry this off in any venue. It’s as good, if not better, as anything you’ll hear in the charts and is topped off with another stunning piece of guitar work from Robin and Greg, backed ably by Adrian’s drums. A funky, bluesy guitar opens Better Place, a high energy filled track that definitely treads the blues rock path and does it with aplomb. The vocals take on an Alannah Myles hue showing Jane’s versatility and downright potency. A catchy chorus and suitably fiery solo complete this punchy track.

A fast paced hard rocker Black Heart has the requisite heavy riffing, influential rhythm section and in your face vocals that take you back to the height of the 80’s peak of the genre. Greg gets inventive on the keyboards and I’m kind of reminded of a female fronted Magnum around the ‘Wings of Heaven’ period. Damn these guys can write some serious hooks and songs that become downright habit forming! Bluesy, soulful, dynamic, powerful, I’m running out of words to describe this compelling and captivating group of musicians and All She Needed just carries on the superlative music experience. The riffing guitars drive the song on at a breathless pace, a really electric and intense piece of music with superb vocals that flies headlong to its guitar solo inspired close. The pace is notched back a bit on the AOR classic Thanks For The Memories, a nostalgic track with its contemplative vocals and reflective guitar tone. Another memorable chorus and polished solo just leave me shaking my head in disbelief at how good Iconic Eye are at what they do. Jane’s tastefully emotive vocal being the final layer of class and style on this refined song. Don’t Stop Me From Leaving has a simple sadness at its core, another anthemic song that will be a sure fire live hit. Jane’s poignant voice sings of a sorrow and heartbreak that may come and the music fits the mood perfectly with the plaintive keyboards and the wishful and reflective guitar solo. The last song on the album is the enigmatic Never Get Through The Light, a proper hard rock track with a heavy touch of AOR in the guitar , drums and vocals. A compelling piece of music that never lets up, keeping you on the edge of your seat, another standout chorus and some simply superb guitar playing close the album out in suitable style.

Iconic Eye should soon be a name on everyone’s lips, a byword for sumptuous hard rock stamped with their own unique style. An outrageously talented group of musicians with one of the greatest female vocalists I’ve heard in a long time, in ‘Into the Light’ they’ve produced a rock album of rare quality from beginning to end.

Order ‘Into the Light’ direct from Iconic Eye here

Let it rain down re-imagined with new members, Janey Gillard and Robin Mitchard