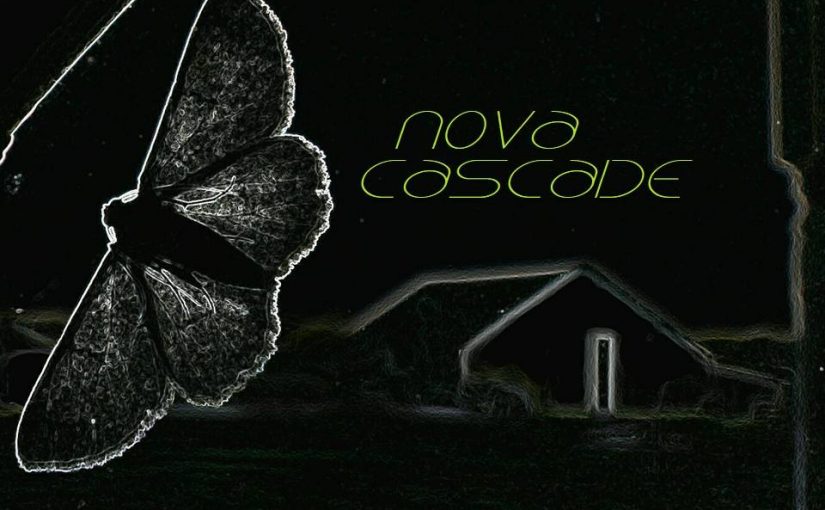 Having formed in Spring 2017 Nova Cascade have done remarkable work to get themselves known in prog circles quite quickly. With their debut album ‘Above All Else’ they have hit the ground running. Nova Cascade are made up of musicians from 3 different countries, Dave Hilborne (Vocals, Synths) Dave Fick (Bass) , Alessio Proietti (Guitars) , Heather Leslie (Violin), Charles Bramald (Flute) and David Anania (Drums). The road to this album is a story in itself, with different recording methods,including a phone, some very credible guest appearances and the swapping of files to get to the finished product. The band blurb will tell you that this album was recorded on a budget and the production is very homemade, but this should not distract in anyway as what you get is good raw performances and feel.

Let’s start with the artwork, the rather fetching and beautiful cover artwork was designed and drawn by one of my favourite geniuses Paul Dews of How Far To Hitchin fame. This gets the ‘Above All Else’ experience off to a good start, the illustration matches the feel of the album well. This is then added to with some great photography from Brooke Smith.

So onto the album, at 37 minutes, this is perfect for the style and feel of the album. I am not sure if there is a genre of prog call ambient prog , but if there was not there is now! At the right time and moment this is a wonderful relaxed album to chill out to. Designed to be played as a whole, each track effortlessly blends with the next to form a dreamy mixture of music. Mainly instrumental the album is punctuated with vocals, and when they do arrive the best comparison I can give is Talk Talk’s Mark Hollis , which given the ambient feel of the album works well. The title track Above All Else opens the album and a fine track it is one of the vocal tracks the track sets the scene for the ambient feel, the instruments blend and weave together for a very nice feel. Continuum follows and introduces the drums, this really is a nice track, again lots going on which can be appreciated more on headphones. The tracks are very short (in the prog world) which sometime leaves you wanting more but that is no bad thing, just hit play again. Prophecy has a Marillion type guitar led feel to the song, at the time of writing my favourite on the album. Hurtled brings back vocals and the Talk Talk reference would be appropriate for this track. LO-FI, Epiphany, One Hundred & Fourteen and Imago all continue the ambient feel very synth heavy and all pretty glorious again a listen on headphones does it justice as sounds work their way around your head, the piano on One Hundred & Fourteen deserves their own mention. This is a great section of the album that lets you drift off. Swept Away is the penultimate vocal track and is a more guitar drums and,in particular, bass guitar led track, probably the most upbeat track of the album but still fits in well with the overall feel of the album. The final instrumental is Icarus, maybe because the name of the track puts something in your head but the sweeping synths and melodies do feel like they would accompany flying. And finally we finish the album with one of the standout tracks Wilted, the vocals arriving just at the end delivered just right to end the journey. ‘Above All Else’ is a great debut album that will put Nova Cascade on the prog map so to speak, yes there are times when the production could be better but it never distracts and to the majority they would neither notice or care as the music outweighs this. Very interesting to see/hear what comes next.

Order the CD from eBay here