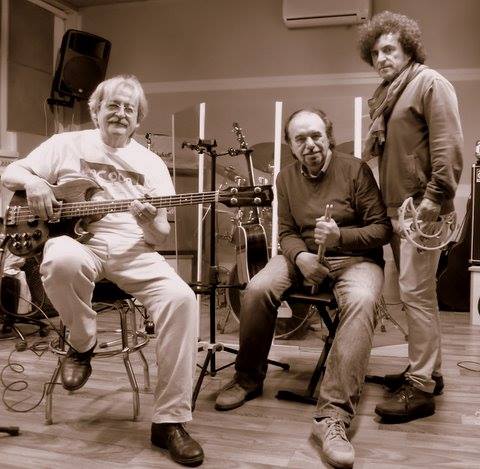 They may be a new name to you, they certainly were to me, but Italy’s Acqua Fragile were originally active between 1971 & 1975, and vocalist Bernardo Lanzetti joined PFM for their ‘Chocolate Kings’ and ‘Jet Lag’ albums, leaving in 1977.

The catalyst for this reunion record came when Bernardo celebrated his career with his Vox 40 concert, and the revived band consists of Bernardo Lanzetti (vocals, animoog, guitars) Pierro Canavera (drums/percussion/backing vocals) and Franz Dodi (electric bass), as well as guest musicians like Jonathon Mover (on opener My Forte) drummer Alexander Mori (son of original keyboard player Maurizio Mori) as well as members of the Acqua Fragile Project, a collaboration put together by Franz Dodi of younger musicians playing the original music of Acqua Fragile.

You wait a while for some bands to get on with the ‘difficult’ third album, but it’s taken these guys over 40 years!

Joking aside, the musicians have worked hard in Italy, and Bernardo is a well known name on the progressive scene, having worked with Mangala Vallis amongst others, and with new blood in the group like collaborator Alex Giallombardo, who provides guitars, vocals and keyboards this blends the best of traditional Acqua Fragile with new sounds and contemporary production values.

This blending of old and new is probably exemplified by the track Wear Your Car Proudly, which was a track the band used to perform in the 70’s, which had never been recorded. The music was intact, with some driving guitar and bass, and wonderfully squelchy mid 70’s synth sounds, (it’s also reminiscent of the neo-prog sound of the early 80’s) yet the lyrics had gone, no trace, so Bernardo’s friend came up with some new lyrics, and hey presto, a wonderfully eclectic song all about motor racing. It’s in the Italian blood, and the passion comes across in this song.

They have even recorded a track in Italian, Tu Per Lei (You for Her) with some wonderfully emotive vocals from Bernardo, and a great electric guitar solo, and it’s true that Italian is a beautiful and emotive language, I don’t know exactly what’s being sung about, but it sounds fantastic.

In fact that’s a good word to use to describe this album, fantastic, I always admire musicians who can write in their second language, and their English is probably better than mine (I am also probably a little jealous as I am no linguist, cunning or otherwise) and to flit between their native tongue and English, is wonderful.

The Drowning meanwhile utilises the lyric skills of Nick Clabburn, who paints a wonderful picture, for Bernardo to fill with his rich vocals.

Meanwhile Rain Drops is a poem, by the legendary Pete Sinfield, that Bernardo loved so much he wanted to adapt, he even explained how he got permission from the elusive Mr Sinfield to include this on the album (in the interview elsewhere on Progradar that I did with him) and the orchestral, almost Oldfieldesque accompaniment works perfectly in drawing the nuances out of the lyrics, and Sinfield’s imagery is both wonderful and very emotive, again showing Bernardo’s voice off to the full.

The core band here sound relaxed and enjoying each others company, whilst the self-explanatory All Rise is a fab rockier number, showing the band kicking up a storm, in a nod to the live arena, a self confessed first encore track, utilising the traditional courtroom phrase to great effect, and providing the energy and power that every good encore needs.

The mood slows a little, with the lovely acoustic How Come, where Bernardo’s vocals continue to shine, and his personal and moving lyrics work in this stripped back environment, providing a brief period of reflection prior to the closing power of the albums title track.

A New Chant see’s Bernardo projecting his voice in an operatic finale, the music and lyrics working together, a beautiful merging of sound, topping off what is, to these ears an excellent record.

It’s great to see that bands can reform after a long period of time, pull together in the studio and rediscover the old magic, this is Acqua Fragile reborn for the 21st century, and is worth a listen. I really enjoyed it.