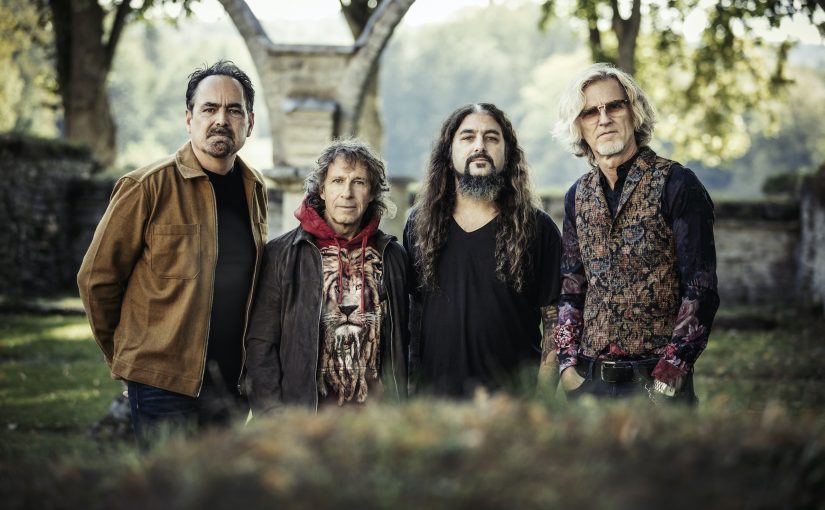 This February sees a new album from the Neal Morse/Mike Portnoy – Transatlantic realm of progressive activity entitled ‘The Absolute Universe’. This is a little different though in that this album exists in two main versions, this review covering ‘The Absolute Universe – Forevermore (Extended Version)’.

We are informed that each of the albums are different entirely. Rather than being just extended versions, these are different animals that share the same DNA. So it will be interesting to do what we used to do in English at school i.e., compare and contrast them.

This 2CD or 3 vinyl version has more tracks and an additional 30 minutes running time over the single CD/2 vinyl version titled ‘The Absolute Universe – The Breath of Life (Abrdiged Version), both are housed in Digipak sleeves with seriously impressive artwork and graphics. For Transatlantic money is apparently no object, seeing as they are a flagship group for InsideOut, one of their ‘jewels in the crown’ and a proven seller. This album will probably sell in copious amounts and I’m sure both versions will be highly sought by the faithful.

The album starts strongly with Overture, a thunderous 8-minute mini saga all on its own. Unsurprisingly it is everything that you would want and expect, it certainly impressive sounding and a good set up for all that follows. The album has several themes, Neal Morse states that some of it is autobiographical about his own ego in his early years and also comments about the state of America, along with thoughts about how the world is handling the current pandemic.

Heart Like A Whirlwind is a sprightly little number with a jaunty keyboard sound and some sweet guitar embellishments from Roine Stolt. Transatlantic really bring their choruses to life here and Neal Morse is also on great form, in fine voice and really belts this one out. This is a class song by any standard. Higher Than The Morning has Roine singing along with some great bass from Pete Trewavas and delivers another fine chorus along with some more great guitar from Stolt.

This release has a mixture of pieces, some longer, some shorter but all woven together in a symphonic Tour De Force, it is an album that needs time to appreciate all that it contains and is seeking to convey to you, the listener.

The tracks continue to impress with some seriously good playing throughout as things proceed. We come to the final track of Disc 1,The World We Used To Know, which is another lengthy workout track where the whole band can show off their fantastic ensemble playing, a sinewy snaking guitar line from Roine sitting perfectly alongside some powerfully evocative piano from Neal Morse. The song is looking back fondly to how things were and a yearning for those times to return once again, a sentiment that is probably common to us all at the moment!

Disc 2 opens with The Sun Comes Up Today, it offers stacked vocals before Neal offers some great Mellotron sounds for Roine Stolt to solo over. Exceptional, strong Hammond work from Neal is offset by elegant riffing from Roine, subtle running bass from Pete and energetic thunderous drums from Mike Portnoy who is spot on here. It has another strong chorus and is a fabulous shorter song. This leads into the brief prelude to Love Made A Way, that we will hear as the final track of the album, all propelled by acoustic guitar from Roine and some smooth keyboards from Neal. The interestingly titled Owl Howl then follows with a very meaty riff (that is not unreminiscent of Steve Morse’s work with Deep Purple), with Roine asking “Blackbird, Blackbird What Have You Done?”. Without lyrics, it’s hard to discern what the song is on about but it is certainly one of the harder hitting tracks on here with some interesting sounds and timbres deployed. All in all, a very interesting song with great growling bass and some odd keyboard moments. It actually makes for a song that is fairly odd overall but certainly entertaining, I must add!

Overall, the playing throughout the entire album is strong and impressive, I especially like the interplay between Neal and Roine and also enjoy the rhythm section who support all the fireworks that the others create so admirably. I’ll say one thing, this album is certainly musically challenging, like all the best albums tend to be.

Solitude is the next track, it is about being alone and appreciating the moments as the author is asking questions about how things are now. This song also includes a refrain of the Love Made A Way theme in it and very effectively used it is too. Belong opens with wailing and crying noises before Roine’s liquid guitar opens the music in tandem with Pete Trewevas’ elegant bass, strong organ sounds abound on this shortish track. Lonesome Rebel is next and is another acoustically led piece with Roine on vocals. This one is strong on imagery in the lyrics, politics are in a mess, Roine sings, as he assesses the state of the world.

Looking for The Light (Reprise) begins with an exciting organ solo, backed with some superb bass, powering the track along ferociously. This song is really an instrumental that gives rein for each member to play wildly and express their own talents. Having said that, there are vocals towards the latter part of the song but, mainly, this is soloing by all the band members. We lead into the penultimate track, The Greatest Story Never Ends, which carries on in a similar vein to Looking For The Light, although the vocals come in pretty much right from the off. There is more impressive organ on this one, sounding both full and epic and, again, some good guitar/keyboard interplay here too. It is all extremely exciting, one wonders how this album will translate to the live arena, it certainly has great promise for a lively and engrossing show.

The album closes with the full version of Love Made A Way, opening with gentle piano and guitar runs from Roine Stolt. This is a more ‘Christian’ Neal Morse composition as he sings about how God has changed his life for the better. I know that this might put some folks off, however, the whole song is full of optimism and gratitude. It also has more of that epic chorus and fine guitar runs from Roine whose instrument is wailing throughout the song, and indeed the whole album and he delivers a typically fine, histrionic guitar solo 2/3rds of the way through. This leads us to a very ELO sounding closing section with lots of climbing peaks and cymbals crashing, before everything ends on fading synthesisers and then silence…

This is an album that will make you smile and will definitely tide you over until lockdown has finished, giving you hope for the coming days, being Transatlantic to the max. You did not really expect anything else really, did you? You knew this was going to be wonderfully over the top excess surely? This is what we want and expect from the band and if that is what you get then it will not disappoint in any aspect!

If symphonic progressive rock is your thing, then this album, in whichever form you like, is most definitely for you. Get ready for a great listening experience, hopefully coming to a stage somewhere near soon too, very highly recommended indeed!

Order from Burning Shed (when back in stock!) here: