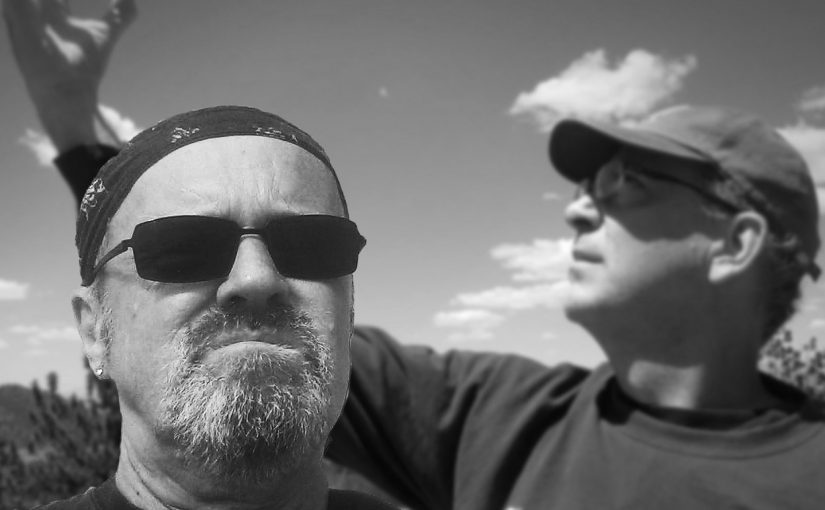 To say that this is an unusual album is nothing odd, but such is the way of modern music making in that this one stands out for being very different, especially when you consider that this collective has never actually met in full or in person, as yet. In fact, up to a few weeks ago Dave and Brad had not even spoken by phone, skype or similar, this despite them having collaborated on two of Dave’s previous albums.

This group or project came to be because all involved are “Passengers”, the collective noun used by fans of the group Big Big Train for their Facebook group forum. When Lanzarote / Canary Island based musician Dave Bandanna put out a message looking for some musicians to help him with a new project, The Bardic Depths came into being, albeit it through the virtual world of file swapping and editing..

Dave, whose normally work entails entertaining holidaymakers by providing music in the evening at various holiday resort and hotels (he also feeds the islands large stock of feral cats) was inundated with great responses. These came from the likes of Gareth Cole, Peter Jones and Professor Bradley Birzer of Hillsdale College, Michigan among others, with Robin Armstrong (Cosmograf) acting as a producer. This album is certainly different because of all these factors.

The album itself is a celebration of the friendship between C.S Lewis and J.R.R Tolkien, both of whom were members of the Oxford University literary group The Inklings, where they would meet to talk about their writing projects and read to each other.

This album explores that friendship across its seven lengthy tracks.  The music wears its influences openly with a touch of Pink Floyd and snatches of latter-day Talk Talk’s prog sensibilities, to name just a couple. All are very lovingly collated together to create a highly impressive, moody and emotionally moving musical collage of ideas, influences and performances that, when taken together, merge to create a series of epic pieces reflecting on friendship through the storms of one’s life.

I know I say this about many of the albums I review, but I feel this really is a remarkable project and one that will be viewed very positively come the end of year listings. Well I certainly think that will be the case here, I know it will be for me. Once again this album will need some time for its treasures to become fully apparent for it is only with increasing familiarity that this will become clear. There is so much great music here for your ears to embrace and enjoy that this journey you take will be a most worthwhile and revealing one for you to both start and to appreciate.

Opener piece, The Trenches, refers to the first world war experiences that both C.S. Lewis and J.R.R Tolkien endured and it is very evocative. Greek literary characters are used to ask the questions about the decisions made, and what the impact of those choices had, on the average man in the trenches. Biting Coals, speaks of the writing group and how, as war survivors, they meet and discuss and talk things over. This song has a lot of atmosphere that is utilised to great effect creating both a safe and cosy environment for the conversation.

Depths of Time is the first real epic, clocking in at 12:33 which gives this three-part piece lots of room for some very extensive instrumental sections. These include some fine, airy sax from Peter Jones amidst some fabulous rhythmic guitar playing from Gareth Cole. The music here is rather ethereal sounding in tone with lots of space surrounding it to give an open effect and a chilled and relaxed tone, all very impressive really. The next piece is Depths of Imagination which opens with spoken word from Brad Birzer and a strong pulsating bass line from Dave Bandanna along with some great keyboards from Paulo Limoli that offset Dave’s vocal delivery.

Depths of Soul follows, opening with some fiery lead guitar from Gareth and more spoken word from Brad. It’s all very evocative sounding and moves onwards fiercely, fuelled by the drums of Tim Gehrt drums and Dave’s fine bass playing once again. The End is another atmospheric piece that contains some great cello from Mike Warren, a fine piano melody from Paulo Limoli and some lovely flute from Dave. This song has a great melody which suits its gentle tone, the music has passion and depth and sounds exceptionally fine indeed. It is all very musical and tuneful with great melodies that really suit the tone of the songs.

The final song, Legacies, opens with bells and a powerful drumbeat. This piece is about what this friendship leaves in its wake and why it made a difference then and still does for us today. How these men lived, what they believed in and lived for still matters for us today and that is the legacy they left us.

What we live for is important, the final spoken words draw the circle to a close with the words and a truly epic guitar solo opened Gareth and finished by Robin. It is simply sensational and a stunning close to what has been an enjoyable album. One of the best of the year so far and one that you really need to hear for yourself.