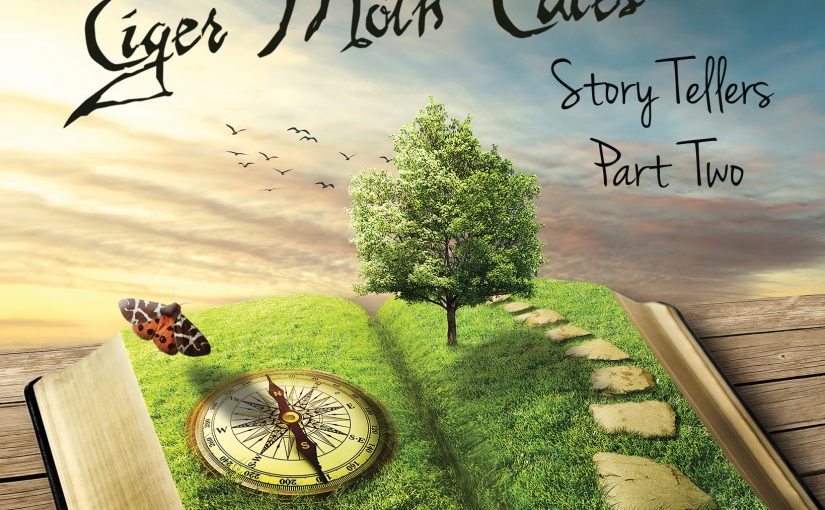 The mercurial Pete Jones seems to have an exhaustible supply of musical ideas at present. Fresh after playing with Camel on a triumphant tour of Europe ending at the Royal Albert Hall, and not long after his last fine Tiger Moth Tales album ‘The Depths of Winter’, Peter Jones returns with the second instalment of his Story Tellers project.  Based on Fairy tales and Children’s stories this is an album of pure whimsy and diverse, entertaining music. Listeners need to check in their more cynical tendencies at the door if they enter this world – this is definitely for the young, and for the young at heart. However, do not be deceived – this is not a collection of simplistic childish nursery rhymes. Pete Jones has skillfully framed these tales in a range of musical styles, intuitively threading elements of pathos, comedy and adventure through the songs.

The opening song Best Friend feels like the opening of a Fairy Tale book with gentle piano notes giving way to some orchestration and Renaissance style acoustic guitars. The catchy, positive lyrics tell of close friends in Jones’ lovely baritone, one of the finest voices in modern progressive rock music. A Hackett-esque guitar line and tinkling keys interlude segues us from this sunlit world into different territory both narratively and musically in Kai’s Journey. Chiming guitars and a tripping, dancing synth evokes the journey perfectly in musical form. An eerie almost jazzy cornet from long time friend and collaborator, Mark Wardle, presages chilling vocoder effects of a sinister snow queen, voiced rather maniacally by Pete’s usually lovely wife Kim! This is an atmospheric and evocative rock instrumental, and the influence of Steve Hackett (one of Pete Jones all time heroes) is strong on this piece, and that is a GOOD thing – indeed, there are distinct echoes of Hackett’s own exploration of children’s tales in his own classic Please Don’t Touch throughout this album.

The delightful diversity of this album is most borne on the next two songs, both masterpieces of whimsical musical imagination in their own very different ways. Toad of Toad Hall is a playful, infectious tune which bounces along mischievously as Jones’ keyboards skips joyfully and eccentrically through this musical vignette. This song also demonstrates Peter Jones’ great ability to sing and talk in distinctive character voices, and his inimitable puckish laugh is absolutely perfect for the character of  Toad of Toad Hall – this is just great fun. In contrast, not a word is spoken in the much more sedate Hundred Acre Wood, but so much is said in different ways. A lovely ambling clarinet tune over gentle piano keys simply conjures up the image of Winnie Pooh and his friends walking in Hundred Acre Wood by instruments alone – close your eyes and you are there.

Eternity takes the album in a very different direction as Peter Jones duets on a lush ballad with his old singing partner Emma Friend whose own lovely voice complements the Mothster’s perfectly… but then he throws in a short soaring guitar solo midway through the song as the duo take flight vocally. I always felt that the fate of The Boy Who Cried Wolf was rather cruel, and it seems Peter Jones agrees as he has produced a rather sombre take on his rather dramatic tale. This more ambitious song admittedly took more time to grow on me as it is not as immediate as some of the other tracks. He uses a range of guitar tones to convey the story, moving from the fear of the wolf attack through to anguish and finally a rather mournful conclusion.

‘Story Tellers part one’ featured the comical A Kid’s Tale, which is surpassed on this instalment with the comic masterpiece of Three Little Pigs, starting with some humourous ‘false starts’. The consistently funny and witty lyrics genuinely made me laugh out loud at one point… and how often can you say that about an album! Played in intentionally childlike or music hall style this song brims with humour and funny voices – kids would love it… I certainly did!

The ghosts of Trick of the Tail / Wind and Wuthering era haunt the instrumental epic of The Palace as Hackett-like guitars  and Tony Banks-like keys thread right through the piece like a stick of Genesis Rock. Peter Jones makes no secret of his love for any era of Genesis, and the influence that legendary band has on his more ‘Prog’ like offerings is there for everyone to hear, and for many that is why they love his material. For such listeners this will be a highlight on the album and Jones’ skills as a fine guitarist and keyboard player pulls it off with aplomb. After such drama Jones soothes us with a touching tale of the Match Girl over a simple piano backing and a melancholic melodica. This song particularly show cases Peter Jones’ lovely voice, emotively singing this poignant tale.

The story book closes with swelling orchestration and electric guitar solo as The Mothster and Emma Friend briefly reprise Best Friends. You can almost see the credits rolling like the end of some Disney-esque animation… and that’s not said in a sneering manner – Disney have done some great adaptations of Fairy Tales!

This album is a real step up from ‘Story Tellers Part One’, which has not been quite as popular or as revered as other Tiger Moth Tales releases. It had some highlights such as the title song and A Kids Tale, but the rapidity in which it was recorded (there was a challenge to make an album in one month!) did mean it seemed to lack some of the depth and quality associated with his other fine albums. To be fair it was always meant as a more lightweight offering. In this second instalment there is still the sense spontaneity that Jones is looking for in this type of project, but he does it more successfully and subtly on this occasion.

‘Story Tellers Part Two’ is an entertaining album, and it does exactly what it says on the tin – it tells stories wonderfully well.  There’s laughs, tears and adventure… all played with skill and touch in a great range of different musical styles. Categorizing it is impossible, to be honest – it’s not deep or symbolic, just great fun.

If you’ve got young kids or grandchildren then get it and play them some of it (especially Three Little Pigs)… or if you feel like a kid yourself and you just need some escapism just play it to yourself –it may help you live Happily Ever After!