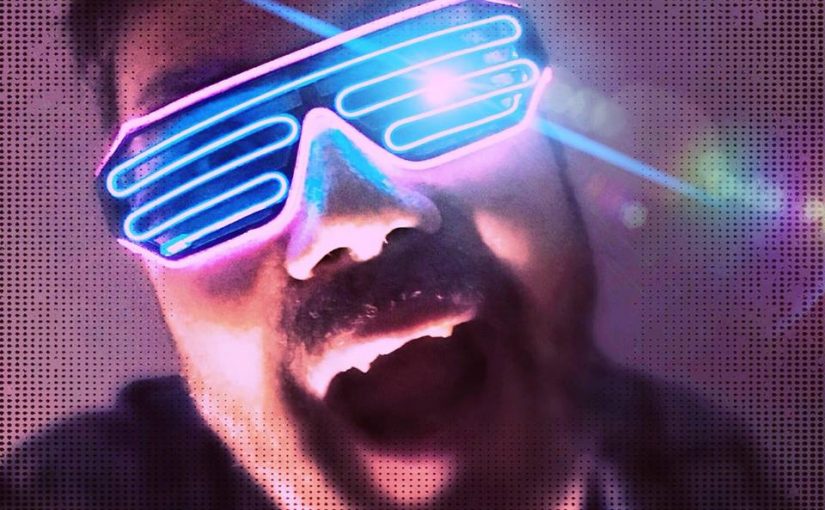 People don’t  know how to talk about genre. There are prog rock related online forums that sensible people avoid because their denizens have endless, idiot arguments about whether certain artists are ‘prog’ or not.  That isn’t how it works. Genre is not a box in which a band is placed, distinct and separate from other styles, especially not prog, which has always fused different ideas together.

Instead, think of each genre as having an imagined perfect ideal that no real world act ever quite matches up to  – the most punk of punk bands, the most metal of metal bands. The real acts you can actually listen to exist slightly outside these, nearer or further from the other genres. Maybe it’s mostly punk, but with 10% of a reggae influence. Maybe it’s mostly prog, but shading into pop.

‘Is it prog?’ is boring. ‘Where is it on the prog spectrum?’ is a much more sensible question.

Where on the prog spectrum is ‘Dial’, the new Shineback album? It’s on there, but this is no 70s throwback. It’s much more interesting. I first met Simon Godfrey in a pub somewhere in London. It was a small gathering of acoustic prog adjacent artists (Alan Reed and the ubiquitous Matt Stevens were also present) to explore the possibility of doing a tour together. The tour never happened, but it did lead to me sharing a small stage with Simon on one of his farewell gigs before he left for the good ol’ US of A. I acquired a copy of his acoustic album ‘Motherland’ at the same gig. Most people would probably have first come across Simon’s songwriting on his other projects like Tinyfish or Shineback but ‘Motherland’ was the first time I’d properly listened to his stuff. With its synths, pulsing kick drums, virtuosic solos and sheer noise, you might think ‘Dial’, the new Shineback album, would be a million miles away from that stripped down acoustic sound, but it really isn’t. Whatever else it is – rock, prog(?), EDM – this is a songwriters album. Simon would be perfectly capable of recreating many of these songs with just an acoustic guitar and his voice. It has choruses and hooks and bits you can sing along with. I’m glad he didn’t do that though, because then we would have missed out on everything else there is on the album.

Now, this isn’t a review (could have fooled me Tom – Ed.), Simon is a mate and I played a little bit of guitar on this album so there’s no way I can provide an objective view of the album. But it is good and I do think you should get yourself a copy. Where does it fit on the prog spectrum? Imagine if you will a graph. On one axis is progressive rock, on another pop music, on a third is electronic dance music, on a fourth is acoustic singer-songwriter music, on a fifth…

Okay, that graph isn’t going to work, forget that analogy.

Maybe a list? What are the things you definitely expect from prog? Rock band instrumentation? ‘Dial’ has those. Long songs? Virtuoso solos? Lyrics about something more than simple pop love songs? All of those are present. What does it have that you might not expect from a progressive rock album? The Electronic Dance Music (EDM) influence is an obvious one. Prog has often used new technology, especially the synth (and there area tasty synth solos on I Love You From Memory and Kill Devil Hills) but so has EDM.

‘Dial’ doesn’t use the structures of EDM – there are no dance style break-downs or drum machine style beats. Instead it uses much of the timbral palette. So we get electronic drum sounds but with a more organic drummer-like touch rather than a more computerised drum machine approach. There are synth swells and pulses, but too much stop and start between sections for much of the album to work on a dance floor. In fact the combination of chord choices, synth hooks and verse-chorus structures in places puts me in mind of 80s pop, or even 80s Genesis. You know, the period where they did heinous things like writing good pop-songs. I asked Simon if that was a conscious decision, but he said it wasn’t but couldn’t deny how much he liked tracks like Driving the Last Spike from that period of Genesis. I can certainly hear that influence in Simon’s chord choices and some of the song structures on ‘Dial’, though I’d happily declare several songs from ‘Dial’ much stronger than that particular Genesis number.

There’s a variety of harmony you wouldn’t expect from an EDM album either. From the introspective piano chords of the title track, through the whole-tone noodling I inflicted on one track to the open, accessible major keys of songs like Consider Her Ways, there’s a range here you’d expect of prog or more complex pop songwriting but not EDM. Simon does mention Stevie Wonder as an influence and while the album doesn’t sound at all like a soul record, Wonder was certainly a songwriter who new his way around a set of chord changes.

The track I contributed to is Here I Am, an obvious mixture of spoken word, booming chords and my own guitar playing that Simon has processed and twisted into something much better than I could have come up with on my own.

The other guest artist contributions are great as well. There are several fantastic solos that will keep any proper prog-head happy, and the guest vocals from Ray Weston on the almost heavy metal track Let her Sleep are a fantastic addition.

With ‘Dial’ Shineback is Godfrey at the height of his powers – a mature songwriter who really knows how to put together a good record. If you want rocky guitars, it’s here. If you want extended prog rock structures, you get them too. If you want synths and electronic drums you get those. Above all you get songs that really pay you back for multiple close listens. I’ve heard the album about five times and am still discovering new details.

Is it good? I’m biased of course, but yes I think it’s fantastic.

That’s a boring question. Did you not read the beginning of this blog post?