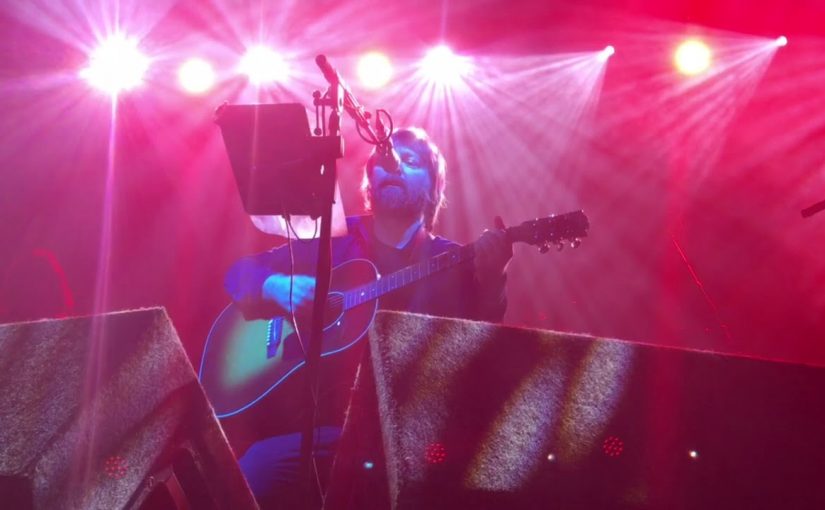 It’s been a long time coming, but former Mansun frontman Paul Draper reappeared recently onto the music scene with a new album called ‘Spooky Action’ (wonder where he found that title…..) and a fresh young touring band.

This year, on it’s the 21st anniversary of Mansun’s debut long player, ‘Attack of the Grey Lantern’ and, ahead of K Scope preparing to release it in a remastered and expanded (and 5.1, oh be still my beating heart) deluxe set, Mr Draper set off on a UK tour performing two sets.

The first made up entirely of solo ‘Spooky Action’ material, and the second being ‘Attack…’, performed in its entirety for the first time ever.

Now, I know the gig was back in February, and we are now into April, but in my defence I have moved to a new house and so when I looked on the calendar and arranged a date to complete (and be out of the flat complete with all our wordlies boxed up and ready for the removal van) I had agreed Feb 22nd.

So, a gig I’ve been waiting to see since ‘Attack…’ first hit my stereo back at the fag end of Britpop over 20 years ago (and it’s astonishing how many influential albums that I consider contemporary are getting the 20th and beyond anniversary, ‘OK Computer’, ‘Urban Hymns’, ‘His and Hers’, ‘Be Here Now’, ‘Boys for Pele’, this was, amongst many others, the sound of my adolescence and dear reader it makes me feel old) and yet I needed to have every boxed up and ready to go without any stress.

So I did what any sensible human would do, and go the gig, but drive – best of both worlds and in hindsight the right move, as it took me back 20 years and the stress of the moment was relieved.

If anyone here doesn’t believe in the healing power of music, then my friends you’re missing out.

Now the gig had been moved from the Bierkeller which shut down in conflicting circumstances at the start of February, luckily SWX round the corner is a nicer and more modern version, with an excellent sound system, and from where we were we had an excellent view of the stage, so as an aside, if you see anyone promoted here and wonder if it’s worth going, it’s a Yes from me (& it’s very close to town and about 20 minutes’ walk from Temple Meads – see, who needs trip advisor?)

Unfortunately, I didn’t catch the name of the support act, who was a local lad with a guitar and a penchant for checked shirts and listening to Nick Drake and Bob Dylan, it was pleasant enough and I’m sure his Mum enjoyed it, but it didn’t set the world alight, and his acoustic guitar sound was lost at points in the venue.

Then came the part we were waiting for, Mansun always exuded an aura of mystery and a certain disconnect that set about as far away from the Britpop scene that they were lumped in with, like a square peg in a round hole, and it was great to see Paul Draper, slightly older, bearded and full of chat between songs and with plenty of stage presence.

Even better, he still has the power in his voice, and an incredibly tight and talented young band around him, with Ben Sink on guitar doing a lot of the heavy lifting, allowing Draper to focus on the singing and being the frontman, he has always been.

I know the audience were there for ‘Attack…‘ but the ‘Spooky Action’ material really holds its own with the gig opening as the album does with the superb Don’t Poke the Bear, and songs like Grey House, Jealousy is a Powerful Emotion, Friends Make the Worst Enemies and Who’s Wearing the Trousers all went down a storm.

Then, after a brief interval, the band came back on stage with a nod from Paul thanking his ‘support act’ and then, the rousing strings of the best James Bond theme there never was The Chad Who Loved Me came ringing out, and the auditorium was lost in a magical musical time warp, as the classics like Wide Open Space, Stripper Vicar, the legendary Taxloss, Dark Mavis and the rest all came out in a blaze of glory.

Don’t get me wrong, this is no nostalgia act, as the first half proved, and as a band who were always slightly out of time, Mansun’s tunes have proved timeless, as this album still sounds fresh, exciting and contemporary even 21 years later.

I went into this show not knowing whether it would be worth my money (&yes dear reader – this is one of those rare occurrences where I review something I paid for!) and it was worth every penny.

During the gig Paul Draper said he would back soon, performing ‘Six’ in it’s entirety – take all of my money, now!!!