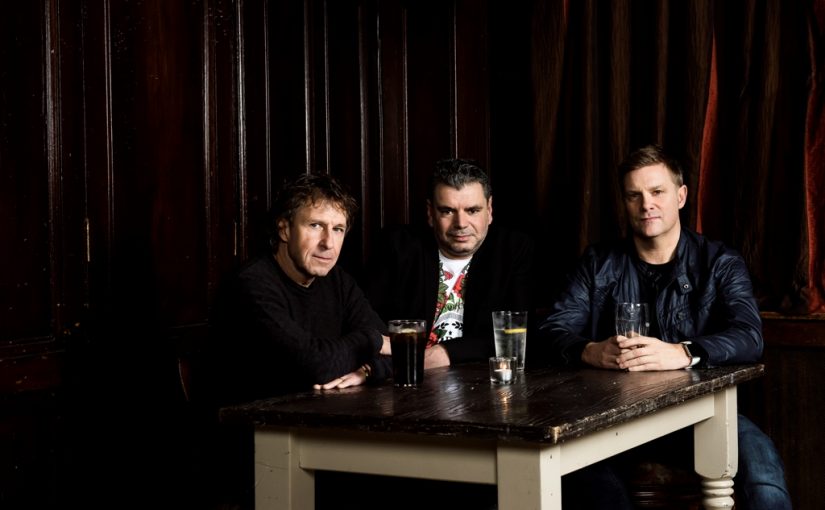 Thirteen years ago Kino opened the doors and eager fans flocked to the blockbuster ‘Picture’.

Starring a stalwart cast of Trewavas, Mitchell, Beck and Maitland, much was expected. Fans and critics alike gave the collaboration a warm reception and they toured venues with Spock’s Beard.

One may have expected to see this Super-group follow up their success with a ‘part 2’, or a ‘return of’, individual commitments permitting, but it all went quiet.

The projectors stopped rolling and the doors closed. Dust settled on the red velour seats, whilst spiders built webs across discarded popcorn containers and their remaining contents long since dried and adhered to the now moth eaten carpeted steps. The lights went out, the drinks machines dried up and a distinct musty hot dog scent drifted on the dust motes, floating across the sunbeams coming through the smeared window panes of the foyer.

Nothing in the last 13 years, barring a vinyl release of ‘Picture’, until, out of hibernation they emerge with new offering ‘Radio Voltaire’.

So what to expect, most of the original cast are back, starring John Mitchell (Lead Vocals/Guitar) and Pete Trewavas (Bass/Backing Vocals) with special guest appearance from John Beck (keyboards) along with a co-starring role for Craig Blundell on the drum stool, replacing Chris Maitland who had in reality already left the band before the release of ‘Picture’ due to other commitments.

But this is a somewhat different affair to the first album and was a far shorter gestation period in the making, with the main driving forces being Trewavas and Mitchell (who also produced, coordinated and organised everything). Having been ready to start work on a further Lonely Robot album, it was suggested by Inside Out that Mitchell might consider the idea of a new Kino album and after a fruitful meeting with Trewavas unearthed the fact they both already had some material between them, they completed the writing process in August 2017. The recording process ran smoothly and was completed over the final two months of  last year.

Will this album bring them back into the spotlights again and reintroduce the glitz and glamour of yesteryear to become another cinematic offering to great applause, or will it be confined to the bargain bins with lacklustre ‘B’ movies, as the ravages of time dealt their scorn and indifference? With a striking album cover design from in demand artist Paul Tippet we’re off to a good start, let’s see. The lights go down, the curtain opens and the silent motion of the digital projection hits the screen…

A crackling German 1920’s radio announcement for Radio Voltaire the title track, preceding John Beck’s swirling keyboards before guitar punches from the gramophone speakers, settling into John Mitchell’s familiar voice building harmoniously on driving rhythms from Messrs Trewavas and Blundell, to epic guitar swashbuckling from Mitchell in his own inimitable style, as scene one fades in the echo of sonar.

Dusty German voices (must get the stylus cleaned) introduce the plunking keys of first single, The Dead Club, as heavy driving guitars and ‘spacey’ swirly knob/key twiddling projects into our ears as this scene races along, spewing PopProg fuel in it’s wake. Building into an edgy musical storm before the repeated track title from John 1 concludes with John 2 stabbing furiously at those terrified keys and we are blasted off track from a ray-gun synth. Kino are flying.

Gentle, haunting keys from the fingers of John Beck break the pace as John Mitchell pitches the emotional vocals and beautiful lyrics of Idlewild perfectly. Swelling gradually, it comfortingly fills all your instrumental emotions as you sit transfixed on the ballad playing out on the screen, dabbing at the corner of your eyes.

A pastiche of 70’s classic rock influences abound on track 4 which, without the guidance of our illustrious Director in Charge, Mr Mitchell could easily have fallen into a derivative mess. I Don’t Know Why anyone could possibly think this fabulously talented quartet wouldn’t pull it off, as they are all performing at the top of their game, adding just the right touches to keep it a refreshing, glittering smile and wink homage.

We are returned to a twenties, cobwebbed vocal/piano introduction (where is that needle brush?) which is suddenly robbed by a cheeky riff on The Who’s ‘Won’t Get Fooled Again’ from Mr Beck, as JM tells us I Won’t Break So Easily Any More. Blazing guitar work, throbbing bass and  thundering drums between only slightly restrained verses, with a nod to a MMEB keyboard style, are all rolled into a perfect Kino energy bar.

The ticking clock with ringing alarm bell, breaks us from our reveries as we are rocked into a warning of our own mortality spanning genres and tempos as we are advised we are running Out Of Time. Pete Trewavas and Craig Blundell shine and glisten like polished glass, as they blend in and out of each other. The commanding bass rhythms are splashed with drops of time signatured percussion that leave you hanging on the edge of your seat wishing it would never end. Anyone who knows me is aware I am not a great lover of jazz, so believe me when I tell you this is a delicious feast for the ears. Relax in hazy summer keys and soft wispy clouds of vocals as they float above us in the Warmth Of The Sun basking in this soothing moment of relaxation.

Craig Blundell‘s percussive patterns navigate us back on board for the ride around Grey Shapes on Concrete Fields changing tempo and showcasing his phenomenal mastery with panache. Driven with keys, guitars and vocals on a race, hitting a breathless abrupt end, that comes all too soon for me. You just want tracks like this to never end.

If there is to be a ‘B’ movie actor on this award hunting album, it would be this track for me though I should Keep the Faith. There is nothing inherently wrong with the music or vocals, but it treads water after the fire of the previous track and the relaxing interlude before it. As the penultimate track it applies the brakes as we had just begun to press the accelerator down the finishing straight.

All is forgotten as the The Silent Fighter Pilot, flies into view for our final foray across the silver-screen, engines roaring defiance as it passes overhead. Telling the the story of a fighter pilot giving his life, through John Mitchell‘s embittered vocals with his raging guitar showering notes like bullets of vengeance. Struck by the futility of war, a fatal blow that sees the track spiral out of control to it’s tragic demise, in a haunting memory.

I’m struck silent for a minute and the Wow!

‘Radio Voltaire’ is a must buy for anyone who liked ‘Picture’, who rate anything the band members have produced in the past, in fact all lovers of Prog music at it’s most sublime.

Everyone performs like their lives depend on it, with a joyous freedom to explore, whilst keeping the Kino sound they have built, but expanding the experience to ear busting IMAX levels.

I declare this cinema well and truly open for business and suggest getting your tickets booked, this could attract a full house, night after night.

One thought on “Review – Kino – Radio Voltaire – by Kevin Thompson”