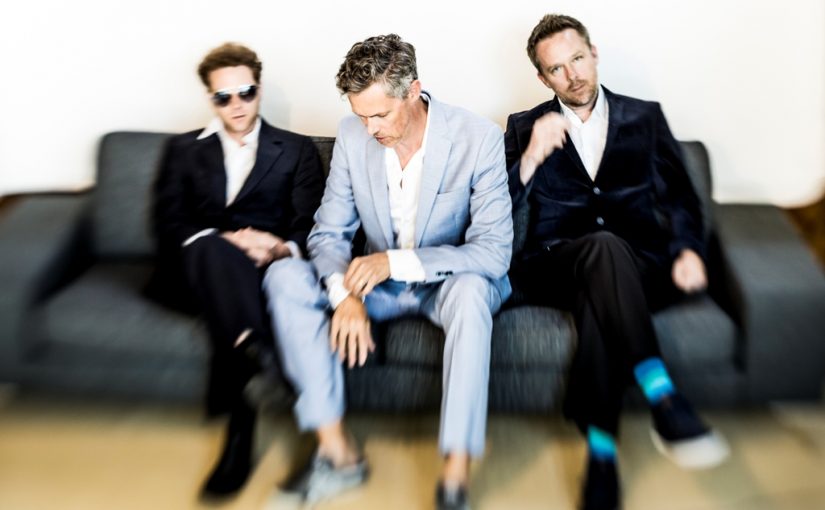 Now, I like listening to bands I have never heard of before, because I like discovering new music, new sounds, and if you review something from a band you have never heard of, I find you are coming to the music from a fresh perspective, not being clouded by opinions of previous records or previous sounds.

I’ve been listening to ‘Vier’ for the past few weeks on my commute to work, headphones on; the sights of Bristol (Clifton Suspension Bridge, Ashton Gate, The Floating Harbour) have all been sound tracked by this, the 3rd album by Perfect Beings.

Based in Los Angeles, the bands consists of Johannes Luley on guitar and bass, Ryan Hurtgen on vocal and piano, Jesse Nason on keyboards and Sean Reinart on drums the band have had a few personnel changes since their last album ‘II’ in 2015.

This latest album is epic in both its scope and it’s performance, being split into 4 symphonic musical parts.

Guedra (18:23) The Golden Arc (16:47) Vibrational (18:17) and Anunnaki (18:42) makes this album their ‘Topographic Oceans’ a rather expansive symphonic CD or, in old money, a double vinyl set (with each side being a song suite, just how the traditionalists like it!)

After losing their original bassist Luley stepped up to the mark contributing both bass and guitar to this album, which will make it interesting if they ever do tour it, as, whilst he is one of the most interesting guitarists working currently (comparable to a Luke Machin or a Matt Stevens), he’ll need to be an octopus to recreate the intricate guitar and bass sounds on here.

There is a lot for music fans to admire on this record from the lush multilayered harmonies that open the record with A New Pyramid, to the sort of instrumental prowess that runs throughout the record.

Luley’s sound has grown and matured, with elements from his two solo albums finding their way into the compositional melting pot here, which stretches and pushes the Perfect Beings’ sound out of bog standard prog territory and into something that bounces gleefully through time signatures, across genres, through the past 50 years of prog and even through the different movements of the record as themes from previous songs appear in the closing suite of Annuki.

The rest of the band seem just as energised as they diffuse the spirit of classical prog sounds through their own musical filter as the sounds of Guedra lead you into The Golden Arc, which is a more symphonic piece of work, with the piano, keyboards and guitar building up, this is not something that is in your face and immediate, these 4 differing musical facets of the band are like a musical game of pass the parcel.

Every time the music stops and you press play to resume the album, another layer is revealed until slowly you get the musical present that is ‘Vier’.

Hurtgen has a unique vocal sound, and use of multilayering and certain effects again remind in places of the style of Jon Anderson and early Yes, whilst some of the song titles have dropped straight out of the I-spy book of prog, things like A New Pyramid or The Blue Lake of Understanding are much better songs than their titles would suggest, whilst The Persimmon Tree on title alone brings to mind a local newspaper headline about house builders and a protected woodland, and yet it’s a rather good song on the album. In fact the shorter songs on here work just as well (if not better) than some of the longer ones, and in the way of song cycles I like the fact that snippets of riffs and musical themes echo across the album, creating a coherent whole. The closing Everything’s Falling Apart is a superbly crisp almost pop song, with some sublime lyrics and musical performances.

Hurtgen’s work on keyboards mixes perfectly with the sound of Luley’s guitar and Nason’s keyboards swathe the album with superb sonic textures and beautiful musical moments, more Rick Wright than Wakeman, his musical skills add to the sound and are a part of the bigger picture.

In fact that’s one thing that stands out about this album, when you have a band like Yes or Emerson, Lake and Palmer, for instance, filled with egos bigger than their talents, you do end up with songs that are nothing more than a glorified solo to pacify and massage those egos. This is one of those albums that are the total opposite, there are some amazing musical sections but on this album the magic happens because the entire band are there pulling together, on the same page, and whilst these are mighty musical talents all the egos are left at the studio door.

There is a lot to like about this album, and there is also a lot of album here for you to like, and the band suggest you turn off and immerse yourself in this record, which is a great thing to do with headphones and a long commute.

A lot of other people have been raving about this record and already proclaiming it album of the year. Now that’s a bold statement to make in January, and yes, there is so much to like and admire about this record, from it’s immersive production to the astounding musical ability on display here, but calling it album of the year is as premature as calling January the best month of 2018. It’s a fascinating and interesting listen with plenty going on musically, and lots of themes that prog fans will love. However to me this is not an album to love, more one to admire. For it’s musical ambition, it’s scope and it’s depth.

Order ‘Vier’ direct from the band: