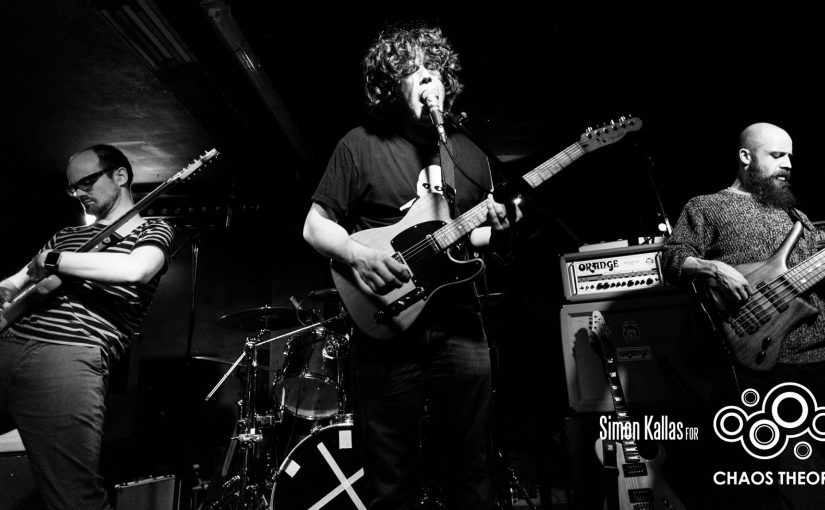 Following on from his review of Thumpermonkey’s E.P. ‘Electricity’, James R Turner posted a few questions to the band…

1) The last full length release was back in 2012, so what have you guys been up in the interim?

Working very, very slowly on a new album, though it is pretty much complete now. Additionally, a lot of the last year has been spent concentrating on making sure that we have a good strategy for its release. Sel Balamir of Amplifier is going to be putting out the album on his new ‘Rockosmos’ label, so we’re all super excited to finally share it. Rockosmos has also just put out a 4 track EP called ‘Electricity’.

2) Where did the inspiration for ‘Electricity’ come from?

We’d played the new songs to Sel that we wanted to release as an album, and while he was really into the vibe, he felt that he’d like us to produce an EP quickly to help consolidate the identity of the label and ease new fans into what we do. So the initial ‘inspiration’ was basically Sel saying ‘write a load of new songs!’ This was a totally different approach to how we’d written the upcoming album – it’s the fastest we’ve ever written new material.A lot of inspiration came after we settled on the EP’s front cover image – I’d been trawling through the British Library archives looking for ideas, and the image of a pith-helmeted englishman getting blown up by his experiments, (in this instance, trying to use electricity to ‘transform babylon’), stood out. We already had the shells of songs by this point, but the image suggested new themes to me – ancient civilisations, colonial arrogance, religion – that kind of stuff. These ideas seemed to naturally worm their way into the lyrics.

3) How do you write and compose your songs? And are there any specific influences on your writing style?

It’s a very democratic process. What normally happens is that everyone produces scores and scores of demos that eventually get whittled down to a shortlist that everyone is happy to experiment further with. There’s very little jamming, really. One of us will end up taking a demo, mutating it into something else, and then if everybody is into it, we’ll start trying to learn it and refine it in a rehearsal space.

We’re big fans of the Immersion Composition Technique – also known as the ‘20 song game’, where everyone in the band is forced to write 20 songs in one day, and then meet to see if there are any bits worth keeping. You can check out www.ics-hub.org for more information about this way of writing.

4) Since your last release the industry has moved apace, are you fans of streaming or do you prefer the physical release?

I think it’s not worth getting too attached to a particular delivery method – I think bands just need to canvas the opinion of their fan-base and see what they are into. What we have learned, (and I don’t know if this is specific to the genre of music we’re making), is that there’s certainly a desire for physical product not to disappear completely. We get a lot of requests to reprint old albums and EPs that have been only available digitally for the last few years, so we promise we’ll try and get round to that!

Yes indeed – now that the EP is out of the way, the next few months are going to be about getting an album release date set – the album is called ‘Make Me Young, Etc’, and will be released in 2018.

6) In the digital age how important do you see the role of social media in promotion?

I know many bands are frustrated by having to engage in advertising on social media platforms, and it’s easy to focus on the negative, but it really is critical I think. While you are fighting against a certain amount of white noise due to the sheer volume of people competing for attention, it’s worth stopping and reflecting on how these platforms offer you the opportunity to connect with people who otherwise never would have heard your music.

We’re playing at the ‘8 Years of Chaos’ all dayer on Feb 3rd at The Brewhouse, London – Chaos Theory is our favorite promoter, and it will be great to play alongside all the other excellent bands that Kunal has picked from nearly a decade of bonkers shows. We’re also looking at dates outside of London as well.

8) Who are your favourite artists/bands?

We don’t all agree on the same influences, but generally speaking we’ve got a lot of time for Shudder to Think, Magma, King Crimson, Deerhoof, Sleepytime Gorilla Museum, and Scott Walker’s recent output.

9) Can you recommend any up and coming bands to us?

Most recently I’ve been really getting into Charlie Cawood’s lush instrumental solo album ‘The Divine Abstract’, (Charlie is the bass player for old label-mates Knifeworld, as well as being a multi instrumentalist in about 20 other bands). Here’s hoping he figures out how to perform it live! I’ve also been enjoying recent releases by Yowie (“Synchromysticism”), and Strobes (“Brokespeak”).

10) What question would you like to be asked in an interview that you never have been? (& what would be your answer).

I’d like somebody to ask me about my constant inclusion of references to Aztec theology in Thumpermonkey song lyrics. My answer would be very long.

Sure – why not! Our upcoming album is hopefully going to have a vinyl release. I’m not one to spend too much time engaging in discussions about the perceived positive or negative aspects of a specific format – a substantial amount of our fans have asked for vinyl version, and all I’m concerned about it that this sounds like a lot of fun. I’m personally looking forward to seeing the artwork in a larger format as well. If enough people demanded our album on a 90 min cassette, I’d be happy to consider it. Maybe not minidisc though. Or wax cylinder.

‘Electricity’ can be ordered from bandcamp here