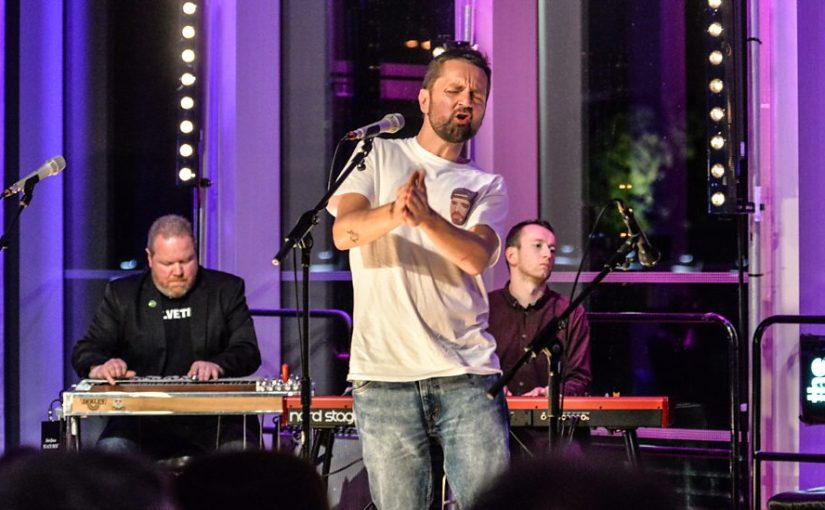 Music never ceases to amaze me with its capacity to delight and its ability to lift you up when you are down and to perfectly fit your mood when you are happy and on top of the world. I know for a fact that my life is so much richer and rewarding because of my love of music.

There are artists, however, who stand out even more for me, musicians whose songwriting talents elevate the songs to another level, able to move you and alter your life with just one note. I have been very lucky to have had some of these very people come into my life and I am a better person for it.

Once again, I have my great friend Iain Sloan to thank for introducing me to the mercurial talents of Blue Rose Code (aka Ross Wilson). Iain contributes pedal steel to several tracks on the new Blue Rose Code album ‘The Water Of Leith’. A nomad both geographically and musically, Ross writes from the heart eschewing any specific genre and the twelve new songs on ‘The Water Of Leith’, addressing themes of love, loss, travel, home, accepting the past and embracing the future, are painted with colours of folk, jazz, soul and pop; an eclecticism that has become a hallmark of Blue Rose Code and has seen him compared to John Martyn, Van Morrison and Tom Waits.

Underlining the sense of movement and place in Ross’s work and ‘The Water Of Leith’ is rooted in his return to his Scottish homeland. There, he reconnected with the stellar musicians who were to become an integral part of the new album’s sound: multi award-winning singer Julie Fowlis, celebrated Gaelic singer Kathleen MacInnes, BBC Folk Award Winner, Ross Ainslie, 2017’s Scottish Jazz Awards’ instrumentalist of the year Konrad Wiszniewski, leading violinist Seonaid Aitken and three of Scotland’s finest jazz musicians; John Lowrie, Colin Steele and James Lindsay, to name just some of the contributors. Grammy-winning American singer-songwriter Beth Nielsen Chapman features on the opening track. Ross co-produced the album with Angus Lyon. Music at its most simplistic has the power to move you and the twelve tracks on ‘The Water Of Leith’, despite being simple and charming, generate such a wide range of emotions. The incredibly tender Over The Fields (For John) is a touching tribute to Ross’ friend John Wetton (of Asia fame and more) who died earlier this year. Sparse instrumentation and the incredibly emotive vocals have a bleak and yet uplifting feel to them. There’s a sadness that is lifted by fond, nostalgic memories and I challenge you to not be wiping a tear from your eye when it comes to its gentle close. Bluebell has an upbeat, soulful vibe, Ross’s vocal has warmth and compassion at its core and Konrad Wiszniewski’s sax and Iain’s pedal steel add a touch of culture to this sophisticated piece of music. Wistful memories float along with the lilting tone of the music and draw you into its sincere embrace. Toe-tapping, feelgood music is at the heart of the wonderful Ebb & Flow with its great harmonies and superb brass, just under three-minutes of music that leaves you in a much better place than before it arrived. The Gaelic tinged hues of Passing Places is haunting in its brevity and beauty. Kathleen MacInnes mesmerising vocals are accompanied perfectly by the childlike innocence of the violin of Seonaid Aitken and Angus Lyon’s accordion with the mournful tone of Wild Lyle Watt’s acoustic guitar adding the final folk-infused touches. The music segues straight into Sandaig where the sparseness is fleshed out with Ross’ stirring vocal. A song straight from the heart, this peaceful spot was immortalised as Camusfearna in ‘Ring of Bright Water’ – the famous book by Gavin Maxwell telling of his life with his pet otters at this lonely spot. Ross imbues the song with love and affection and a kind of longing and with Kathleen adding her distinctive vocals, it’s charm and beauty hypnotise you from the first note. A touching song full of jazz imbued soul, Nashville Blue has a real feel of the roaring 20’s about it. Its passionate feel and elegance cut right through you and the vocal performance is stirring and just a little sad. The incredible playing of all the musicians comes through to give a stellar, if slightly sombre, performance. A perfect slice of modern Scottish folk, On The Hill remains A Heart is a serious piece of music that has you enveloped in tte story, imagining yourself on a windswept hill as a certain part of your life’s journey comes to a melancholy close. The vocals have a more hushed and sincere tone to them and end the song with a thoughtful atmosphere, increased by the superb violin and cello. An open letter to the world that getting basics right is where we should start, Love Is… touches you right in your heart with its poignant vocals and bluegrass inspired music with Seonaid Aitken’s wondrous violin leading the way. A tenderly wistful song with a compassionate belief at its core. Polaris is one of those delightful songs that you just keep returning to again and again and show that Ross is a modern singer/songwriter of huge talent. The tender yet powerful vocals are key here and bring an uplifting emotion to the chorus. A compelling piece of music that you can lose yourself in and forget about the worries of everyday life. Innovative and inventive, like a cross between free from jazz and traditional folk, The Water is nine minutes of utterly captivating music, an involving soundscape on which John Lowrie’s wandering piano and Colin Steele’s original trumpet playing are joined by the adroitness of James Lindsay’s double bass to lead you on a spiritual musical journey into your own psyche and everyone’s journey will be different.  You stop and listen to every note and every nuance and each playing reveals more of this incredible track. There’s no let up to the brilliance as the haunting delta blues and jazz-tinged hues of To The Shore work their way into your mind. A darkly meaningful song that seems to glide effortlessly into the room with a knowing aura, Ross’ vocal has the requisite husky tones to leave you imagining yourself in a dimly lit jazz club in the American depression. The musicianship is staggeringly good, turn the lights down, open a glass of something strong and red and just lose yourself in the wonderfully enigmatic music. The album closes out with the wistfully plaintive Child. Another sublimely simple song that touches the heartstrings with its affection and love. The piano of John Lowrie is the perfect accompaniment to Ross’ heartwarming vocal and the sax adds its stirring tribute and, as the track comes to its uncomplicated close, I just find myself smiling and at one with myself.

In the dark and complicated world that we live in we all need something to escape to, something that makes our lives better and richer and, for me and many others, it is music that has the capacity to do that. ‘The Water Of Leith’ is a poignant, moving collection of songs that have come straight from the heart of one of the best songwriters of this or any generation. Ross Wilson and Blue Rose Code have given us a definitive piece of music that will last the test of time and we would all be happier having it in our lives.

Buy the CD from Navigator Records