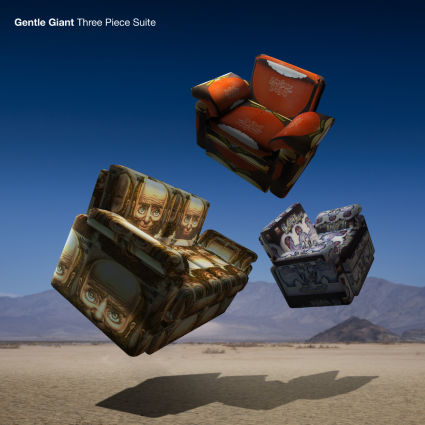 Gentle Giant—’Three Piece Suite’ is a specially curated selection of songs and compositions from the band’s first three albums (Giant, Acquiring The Taste, Three Friends) presented in both 5.1 surround sound and stereo. There are nine tracks from the albums, plus a pre-debut song, remixed by Steven Wilson. The choices were determined by the limited availability of multi-track master tapes from the era. Only a few songs from each album are known to exist as multi-tracks, with the rest presumably lost.

Gentle Giant’s ‘Three Piece Suite’ includes the songs “Giant”, “Nothing At All”, and “Why Not” from the first album “Giant”. “Pantagruel’s Nativity”, “The House, The Street, The Room” from the second album “Acquiring The Taste”. “Schooldays”, “Peel the Paint”, “Mr. Class And Quality?”, and “Three Friends” from the album “Three Friends” completes the list of the original recorded material. The band and Steven Wilson are including a previously commercially unreleased song“Freedom’s Child”, taken from the first recording sessions with legendary producer Tony Visconti. The liner notes by interviewer Anil Prasad include reflections from Gentle Giant’s members about the writing and recording sessions. Furthermore, Steven Wilson and Tony Visconti share their incredible observations about the early days of this unique collection of timeless music from one of progressive rock’s most influential bands.

Tony Visconti recounts:
“I was a very optimistic young man in 1970…I thought music like theirs would save the world from mediocrity. I couldn’t wait to sink my teeth in it. I championed their cause by becoming sympathetic to the point where I temporarily joined the band for both albums. I modified their arrangements and pulled off some stunning audio effects that gave their sound more depth and immediacy. The band knew I was on their side. I remember there being a great feeling of camaraderie during the sessions.”

Steven Wilson explains:
“To create the new mixes, I used Logic as the software and Universal Audio plug ins, which provide emulations of classic analog outboard effects, channel strips and old mixing desks…I used these tools to clean things up and bring out some more clarity, detail and definition in some of the instrumental interplay. There was never a question of trying to outdo the original mixes, but offer different perspectives on them.”

Tony Visconti continues:
“In our own way, we’ve touched the ears, minds and hearts of thousands of true believers.”

The band members, collectively, feel there are still good reasons its fans continue to enjoy Gentle Giant’s music and why it continues to be discovered by new generations. For fans of Gentle Giant, “Three Piece Suite” is a must have. For fans of great musicianship and progressive rock this is an incredible insight into the earliest days of this legendary band.

Watch the video for Peel The Paint here: