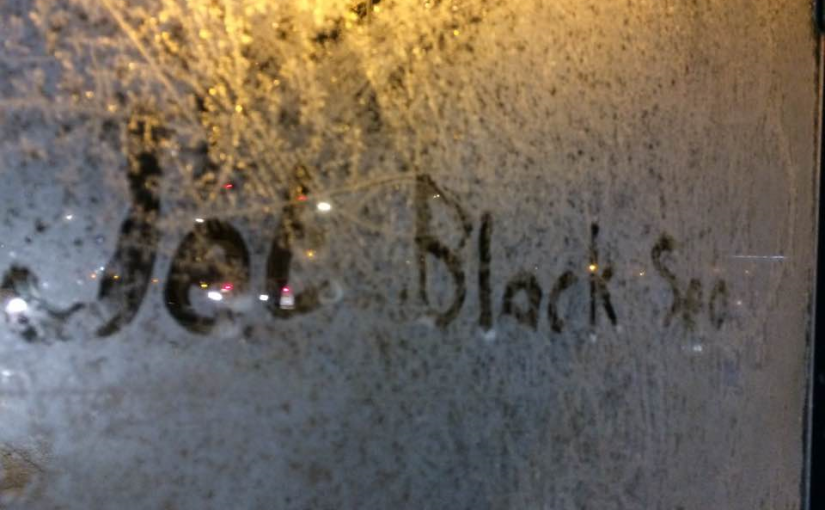 Jet Black Sea: when I got this through my inbox I admit as to being blind to who they were or what to expect, apart from a brief listen to the demos on the band’s Facebook page which was enough to pique my interest.

Adrian Jones’ name popped up and then the penny dropped and the fog cleared with a tinge of familiarity, Nine Stones Close. He is bit of a creative tornado and, like many musicians in the progressive field, prolific in guesting on many other albums. ‘Absorption Lines’ is the second with Michel Simons, the first being ‘The Path Of Least Existence’, released in November of 2013. I did some ferreting around after my first listen through of this one after a very oh my response. Normally the first time I play any album it is to purge out what I have listened to before and get a general feel of what I am listening to musically. I can then flood my mind with the music so all I have is what any musician has created. I never make a snap judgement, I just get a first impression. My first impression here was very much this is special and I immediately flipped back to the start.

To the music which is described as experimental, ambient and dark progressive by the guys themselves and that description ispretty much spot on for me. On paper this is an album of 7 pieces of music or songs with guests: I am going to say that this is actually one piece of consciousness flowing into the recording and divided up into digestible chunks. It is fluid and connected and thus really difficult to do any song by song break down. Musically the journey is rich, varied and textured with more influences than you can shake a stick at, from the ambient trance dance of The Wrong Turn flowing into the middle-eastern doom chording of The Sixth Wheel, Brendan providing the tonal variation drawing the ear to the Minarets and deserts of the Arab Peninsula and North Africa.

Suddenly we join the crew of Apollo 13 for Jumping to Conclusions and a short ambient Berlin School piece drifting in the vacuum of space with Absorption Lines, which flows into a classic Floydian jam session drifting of guitar, keyboards and vocals.

It continues pretty much in this vein through Cathedral until we have a “brass” song as such, with Adrian O’Shaughnessy on vocals and some very understated but powerful guitar work from Mr Jones. Without missing a beat we find ourselves in Hours Slip Into Days, Tony’s voice is silky soft and sits in the sweet spot at the centre of the melody, carrying you into the void beyond this world. We lapse to the end of 133 hours, the time the world held its breath while we waited for Apollo 13 to return home safely. This is a musical and thematic soundtrack to Houston and the Crew of Apollo 13 conversations. It is electronic music married with understated guitar that is built on pure atmospherics. The album is a sonic experience and as a DJ I want people to hear this and hear what I hear. Playing a track won’t cut it for me as it misses the rest of the release. It is an album not a collection of songs, it flows and grows from one end to the other filling the listener and drawing them through and into it. I am a lover of the discipline of the album, maybe it is my love of classical and electronic long form music but this sits in the same place. Adrian and Michel are not frightened to go outside traditional structure and style and they understand their art and want to see how far it can go.

Fans of Cosmograf, Public Service Broadcasting, Autechre, Scanners, Pink Floyd, Tangerine Dream, Robert Fripp and Eno will find succour and pleasure in this album. It is individual in its style and is “Jet Black Sea “rather than a version of someone else. I would say this: when you buy this album switch the connections off to the world and spend 45 minutes just letting the music swallow you up, better still, take 90 minutes and go round twice.