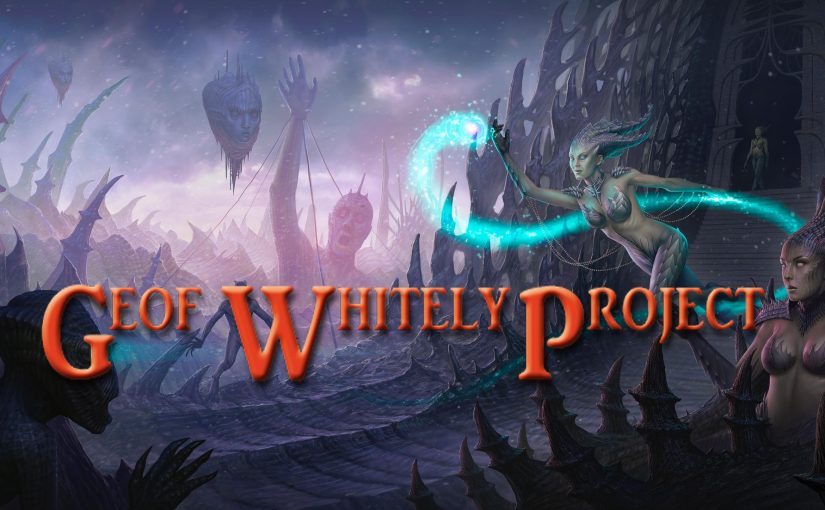 “He sits at the table and reads novels, old favorites of his, the words and plots and characters comforting and lived-in and unchanged.”
― Hanya Yanagihara, A Little Life

Comforting – Serving to improve a person’s mood or restore a sense of physical well-being. That’s the definition from the Oxford English Dictionary and I often find that certain music can be comforting, music you want to listen to that isn’t challenging and just gives a feel-good factor, like your favourite pair of shoes or that comfy old chair you always collapse into after a long and arduous day at work. Mainly it’s comforting because it doesn’t change and you know exactly what you are going to get.

That’s what I like about the Geof Whiteley Project, each release (and there have been quite a few) progresses slightly from the previous one but is still very recognisable as being from this artist. The man behind the project, Arny Wheatley, delivers music that is like an old friend who has just changed their appearance slightly, enough so you notice but not enough for it to be a radical change. The Geof Whitely Project was formed in 2011, it consists of Geof Whitely (actually it’s Arny!) and special guest Musicians, the aim of the project is to put out original material in all types of musical formats from Prog Rock-Rock-Pop-Electronic-Instrumental.

‘Carousel of Souls’ was released in April this year and, after a few listens, has really got under my skin in a good way. There’s a short Prologue that gives a dramatic introduction to the album before a segue straight into the title track Carousel of Souls which has a laid back almost flamenco feel to the music. I like the chilled out vibe that it gives out and the wistful vocal that Arny delivers is a perfect fit. It meanders along gently, taking you with it before opening up with a quicker tempo and an excellent chorus. As I’ve already said, there is no mistaking this for any other artists but, to my ears, the music has an added maturity and sensitivity to it. Nicely played guitar and elegant keyboards give a sheen to the whole song and it’s a great opening to the album. The keyboard intro to Clockwork Heart is very emotive before a short saxophone style blast delivers an intense vocal and another elegant song is put before us. It’s calm and sophisticated without any histrionics and the vocals really stand out on this track for me.  A touching guitar adds even more pathos to the moving music, yes Arny has certainly stepped up a level on this album it would seem. A harder edged, more rocking riff opens Empires Full with an 80’s synth giving it the feel of that decade through and through. Smooth and cultured vocals add to that feeling even more, where did he get that time machine from? A methodical, driving beat adds atmosphere to what is one cool track but, for me, it’s the great guitar and synth that really make this track. Lionheart is an almost anthemic track which has a vibe of a modern day Asia to it. The unhurried verse has a leisurely tempo, the vocals are smooth and relaxed and lead up to the powerful chorus and it all comes together to sound like something that could be used as soundtrack to a Disney film, cultured and urbane. That sax sound returns on Childs Eyes to give an upbeat introduction and that is carried on into the song with some more of those tasty keyboards driving the track along. There’s more than a touch of electronica to the music and the vocal, delivered in a stylish monotone fashion, combines to take us back in time again. I’m beginning to get the idea that Arny might have been influenced by the electronic music of the 80’s on ‘Carousel of Souls’ and especially on this track and Empires Full and I fully approve! A more touching piano note opens House of Cards and it is a very nice touch. The heartwarming vocals begin and the whole mood is one of reflection and nostalgia, I’m gripped immediately as the song takes on a most impressive aura, again quite anthemic like Lionheart. There’s a lovely guitar solo that just bleeds emotion, it is a stirring track that really hits you in the solar plexus with its passionate delivery. Let’s admit it, every musician likes to rock out now and again and Arny is no different. A cracking guitar riff and riving beat open Rock And Roll Band, anyone familiar with Asia’s recent offerings like ‘Omega’, will know what I mean. It has a really upbeat vibe and runs along at a rollicking pace, designed to put a smile on your face and a skip in your step, it delivers on both counts. It’s not what I’d expect from Arny but he pulls it off with aplomb, not sure about the ‘Gonna rock you like a hurricane’ line though lol. The album closes with the dreamy Cold Warning which opens with ethereal keyboards and a heavenly piano note. Arny’s deliberate vocal adds substance over the top and gives the song a supernatural aura. The guitar and keyboards then open up with a more august tone and that supernatural feel goes into overdrive. It’s a clever song and one that cultivates sophistication and the uber-cool guitar solo is an excellent way to close out this knowing release.

All the tracks on ‘Carousel of Souls’ are definitively Geof Whiteley Project but they also have their own character and it’s the way that they all work together that makes this such a great album. There’s a worldly wise feel to this latest release and it’s another great progression of where Arny is going musically and I can’t wait to hear the next chapter in this engaging musician’s story.

Buy ‘Carousel of Souls’ from bandcamp