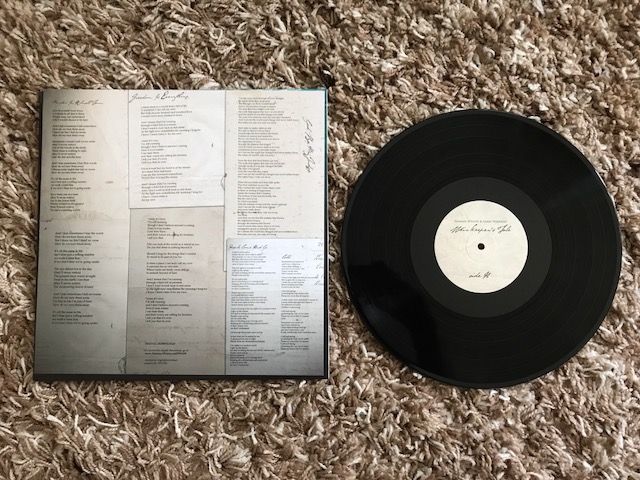 “Any intelligent fool can make things bigger, more complex, and more violent. It takes a touch of genius — and a lot of courage to move in the opposite direction.”
― Ernst F. Schumacher

In this ever increasingly complex life that we lead it is nice some times to have a bit of simplicity to allow us to take stock and have a little breather from our hectic and convoluted lives. For every million note Dream Theater solo from John Petrucci there is a counter balance in music that has an absence of complication, that can be enjoyed for it’s lack of elaboration and Chris Topham at  Plane Groovy has sent me over a vinyl album that just captivates with it’s beauty, a beauty achieved through it’s ethereal sparseness.

Damian Wilson and Adam Wakeman got together in 2015/2016 to record 9 new acoustic songs that would become the album ‘Weir Keeper’s Tale’. This was released in 2016 and now Plane Groovy are releasing the vinyl version complete with wonderful album art by John Townshend.

Adam  said that, “With this album, Damian and I both wanted to capture a real cohesive album of our songs outside of the writing we do with Headspace and other heavier bands. It gave us an opportunity to really focus on the songs as singer songwriters, and to concentrate on telling individual stories.”

And this collection of stories has been crafted into beautiful songs and given the home they deserve on this wonderful vinyl package. Once I’ve extracted the album from the shrink-wrap I get to admire the brilliant album art on both the sleeve and the inner liner, it truly is a thing of beauty and just oozes quality, what I’ve come to expect from a man as passionate about vinyl as Chris Topham is.

There’s satisfaction to be had from just handling the vinyl package and pouring over the liner notes after I’ve let the needle gently land on the record and the first notes ring out, the sound wonderfully rich and warm, not like the clinical music you get from CDs and digital. Damian Wilson has a brilliant voice, powerful, deep and resonating but on this album we see the more humble and gentle side of him, as the graceful piano of Adam Wakeman opens Seek For Adventure you’re immediately put into a mood of repose and calm and then Damian’s voice joins in and it is just captivating. Together with the simple instrumentation it has a grace and charm and not a little wistfulness too. I was left open mouthed by the impact that this uncomplicated delivery could give. Adam’s backing vocals are unobtrusive but really add to the childlike innocence that the song conveys. Just sit back and enjoy this effortlessly classy music. The tempo increases with the title track Weir Keeper’s Tale, the piano has a bit more urgency and Damian’s vocal a touch more intensity but the wonderful warmth and bonhomie are still present and correct. It’s a humble and inelaborate little ditty that moves along at a jaunty pace and leaves such a feeling of goodwill in its wake. The choral backing is a lovely touch and adds even more elegance to this unembellished track, a short but exceedingly sweet piece of nostalgic artistry.

Adam Wakeman takes over vocal duties for the dreamy and thoughtful Catch You when You Fall with Damian providing the delicate acoustic guitar backing. Here the sparseness levels are at their highest, the music stripped back bare of any unnecessary trappings and it works brilliantly as a result. The guitar provides the opening bars allowing you to clear your mind of any frivolous thoughts and concentrate on what you are about to hear. Adam has quite a striking voice with an earnestness at its core and it really fits the song, a calm authority settling on proceedings. As I’ve said before, these songs really work on a vinyl release, the music is rounded and full of character, warmth and charm.

Damian himself said, “How we ever got convinced that the CD was a better medium than Vinyl, I will never understand. Cramming music onto a 16 bit CD loses a lot of information. The best way to hear what’s missing is to listen to the vinyl.”

With a feel of a singer/songwriter’s track Together Alone opens with that rich piano note that Adam conjurs up at will before Damian’s heartfelt vocal begins. There’s an almost melancholy tone but you can’t help but be caught up in the exquisitely delivered music. There’s a memorable chorus that I can’t help but sing along to and the whole track moves along at a fairly sharp clip. Actually making music this simple and yet so mesmerisng is an art in itself.

Murder In A Small Town is like a very short story (4 minutes and fifty-two second to be precise) that has been set to music, an American noir novel sung to you by Damian himself. The tender vocals and fragile acoustic guitar add an ethereal feel to the song and you soon get lost in its sublime and intangible ambience. I feel like I’m in a a shadowy half-world of calm serenity. The piano solo in the middle is a thing of heavenly refinement and adds even more gracefulness, it actually takes me a few seconds before I realise that I’m listening to silence as the needle comes to the close of side one. Side two starts with the excellent Freedom Is Everything, the opening notes from the piano set up a rather engaging song that, again, has a feel of the great singer/songwriters to it, in fact I’d go as far to say that it actually reminds me a bit of early Simon and Garfunkel. Damian delivers another ardent and heartfelt vocal performance that comes straight from his heart, there’s passion and devotion dripping from every note and the simple but effective piano accompaniment is genius. When I’m sat back with a nice glass of red wine in my hand and listening to this beauteous creation, I’m in a very happy place indeed. There’s a somber feel as God Be My Judge begins, the acoustic guitar and Damian’s vocal give a contemplative and thoughtful edge to the song and the backing vocals in the background add a really wishful tone. A fragility runs throughout, a slight catch in Damian’s voice and the near intangibility of the guitar, a piece of music with its heart laid bare for all to see and judge. There’s a lump in my throat and moisture in my eye as it comes to a close.

That emotion stays with me as we come to the penultimate track and one of my favourites on the whole album. People Come And Go opens with a powerful, almost forlorn piano note and Damian has real pathos in his vocal, a subdued guitar in the background. The yearning feel disappears as the piano takes a harder tone and the tempo increases, Damian adds even more emotion and poignance to his voice leading into a hauntingly memorable chorus that has become a real ear worm for me. An incredible piece of music that touches my heart and really moves me on an emotional level. It’s a song that I keep returning to on a regular basis, maybe it’s the subject matter, I don’t know, I just love it and the part where everything goes quiet before bursting out into that brilliant chorus again is just inspired. So to the final track on the this release and what a way to bow out. Cold is the epitome of simplicity and grace, the beauty of a delicately strummed acoustic guitar matched with Damian Wilson’s exquisite and heartfelt vocal is near perfection. A song that takes wistfulness to a whole new level and one that takes you to a place of calm reflection, the fragile and tender guitar playing that closes out the song and the album is just divine and as the needle reaches the final grooves I just sit there in silent admiration.

This is one album that always seems to be on my record deck or playing in the car. A testimony to Damian Wilson and Adam Wakeman, it is an absolutely timeless record that takes music at its most simple and lifts it above the mere excellent and onto another level altogether. Nine incredible songs that deliver both emotionally and intellectually to give a listening experience like no other, I cannot recommend it highly enough but please buy the vinyl as that is what makes it so special.