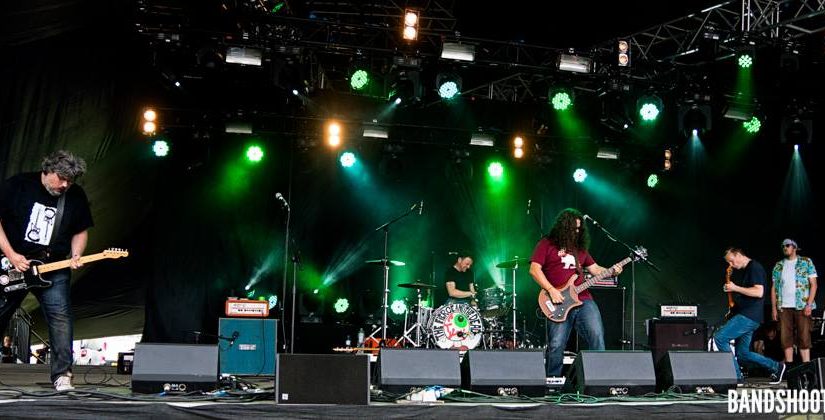 Despite saying they would be easing off a little after last year’s hectic release schedule, Bad Elephant Music (BEM) are showing no noticeable signs of slowing down in unleashing new music to our ears for 2017.

Soon to be released and highly anticipated is the ‘Field Recordings’ EP from one of BEM’s rising bands The Fierce And The Dead, (TFATD) and catching them in all their glory, live from last year’s Ramblin’ Man Festival. It includes four of the regular favourites and two new tracks, which the band tease may or may not appear on the new album which they are currently recording.

Based in Northamptonshire this 4 piece instrumental rock band formed in 2010. They line up as: Serving up a sound that continually evolves taking in every genre they can squeeze in and veering from scuzzy guitars to chilled Hawaiian licks we find jazzy undertones married to punk style jerks and everything in between, moulded into their own distinctive sound. You can never get too cosy listening to the chilled rippling strings, because just as you sink into your deck chair, hanky on head with a cool drink in your hand you can be hit with brutal metal riffs and twitching rhythms that will have you up and jumping around, your head waving wildly like a rag doll. Their loyal and growing following have already seen them supporting Crippled Black Phoenix and The Aristocrats among others.

Now whilst I have the band’s recorded output I must confess I have yet to have the opportunity to see TFATD live, something I must remedy in the future, so I can only review this from listening and using my wildly vivid imagination. They kick straight in after the briefest of understated introductions, blowing any clouds away with the fast distorted riffs of Magnet In Your Face and anyone trying to chill is brought abruptly back to the land of the living. They lay on a few laid back chords like cars drifting smoothly round corners then crash back into the fray with Stuart’s drums careering like one huge pile up on the biggest of motorways with Kev Feazey’s bass weaving like Vin Diesel through the traffic as Steve and Matt’s guitars flick the NOS switch and hurtle to the finish line.

But there is no pit stop or time to refuel as it’s straight into Ark, with the guitars switching briefly to cruise after the bass revs it’s engine. But the temptation to rev will out and throughout the chilled rhythm the drums pull at the choke and the plugs spark in bursts.

Many albums can be lost in the studio as they are mixed and chopped, losing the ‘live’ feel. So it’s nice to hear the crowd and banter haven’t been removed from between the tracks and a credit to Mr Feazey’s mastering capabilities that he retains the atmosphere and gives him the chance to introduce the band before the next track, Dancing Robots, (a new one for those who do not have the knowledge).

Looping guitars drift in as the drums tick over before the bass presses the start button and we side-slip into the traffic before whipping out on to the fast lane racing weaving through the crowd and away. We are treated to the sounds of tuning and a short modest merch promotion, before being introduced to another new track Verbose which will ‘probably’ be on the new record out this year. Drumsticks count us in and then frantic short riffs followed by the throbbing bass blow the wind through our hair and from somewhere I’m reminded of ‘Radar Love’ before the intensity builds and gains pace, all the while the bass driving the tune on. This is probably the heaviest track on this EP and ends with screaming distorted guitar as it slides down the scale.

Perfectly suiting the open top car on a sunny day, a looping Hawaiian lick introduces us to Palm Trees, the only track with ‘vocals’, but you’ve no sooner taken your beach towel out of the boot and spread it on the beach, when a huge wave of distortion hits you and you are left soaked in crumbling guitar notes. Last track, live favourite 666…6, is introduced as the band’s hit single to a ripple of appreciation from the audience. Looping tropical chords warm up the engine one last time twisting through the air before a Biffy Clyro style riff changes gear and rips through them. Down a gear again to the loop before the band rev again. It’s like trying to reign in a muscle car that doesn’t want to cruise and pose along the sea front but would rather burn rubber and screech down the road towards the dramatic climax. This is how to burn out a musical clutch. The speed builds and it all comes to a crashing end, fading out as the crowd applaud and cheer an exhilarating performance.

For anyone not having heard the band previously I can heartily recommend this as not only do they revel in playing ‘live’ but it is a great taster for the distinctive TFATD sound. Then if you like it make sure you catch up on the rest before the new album comes out later this year.

If I can also give a special mention to the fabulous cover art from the legendary Mark Buckingham, nice.

‘Field Recordings’ is how live music should sound and many bigger bands could learn from this. Looking forward to the new album boys.