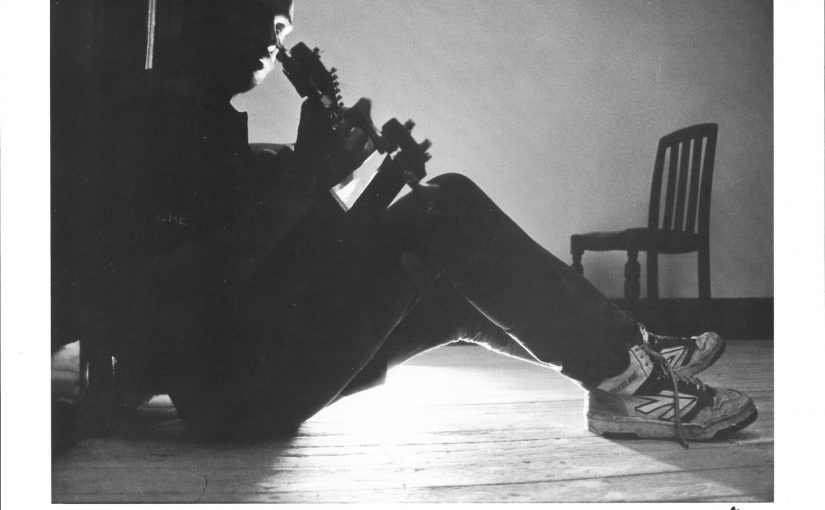 Whilst most people who have read my reviews over the past 20 odd years for various places like the Classic Rock Society and here know I love me my prog, what you probably don’t realise, or hadn’t noticed was how much I love my folk music as well. I think it’s probably the yin to the yang, with the less is more emphasis that folk music has being as fulfilling as the intricate complexity of progressive releases.

David Elliott of Bad Elephant Music is also a massive folk, folk/rock music fan as well, and after the success of their reissue of Twice Bitten’s ‘Late Cut’ album late 2015, there has been demand for the reissue of ‘Flightless’, Rog Patterson’s solo album originally released back in 1989 on vinyl.

So here it is, finally on CD and download, the original 6 tracks remastered and enhanced by three demo versions of tracks that would have appeared on the next album, had Rog actually recorded it!

When ‘Flightless’ was released Rog toured extensively, supporting such luminaries as Fairport Convention, Roy Harper and John Martyn amongst others, and it is into this arena that ‘Flightless’ nicely sits.

A solo album in the complete sense, where Rog plays guitar, basses, vocals and pretty much everything else, the 6 tracks on this album, are some mighty fine English folk prog, and the emphasis here is as much on the vocals as the music, as whilst Rog is an absolutely sublime guitarist (a touch of the Ant Phillips here, the Bert Jansch’s there) he is also an incredibly intelligent lyricist and observer. In fact both vocally and lyrically there is a shade of Bob Pegg about him, but I think that’s as much to do with the accent and attitude, as both men have a unique rather specific political world view, and this is reflected in the songs on here. To a lot of people folk music is stereotyped as some twiddly nonsense with violins and Morris dancers, to those people who think that way I say ‘Poppycock’, folk music in its truest and strongest sense is the voice of the people, the voice of protest and the most potent form of politicised music possible, and like many others in that ilk, Rog uses this music to put across his concerns in a strong musical style.

From the opening An Englishman’s Home, with it’s well observed vocals and intricate guitar work from Rog, a pattern that will repeat throughout the album, it sets the tone for the rest of the album, and is the shortest track on the album.

Rogs acoustic prog roots show throughout the album, with Ergo Sum clocking in at 9 minutes plus has some of Rogs beautifully intricate guitar playing and strong lyrics railing against the Lords of the manor taking what they think is there right, the pounding bass and acoustic guitar drives the song along as Rogs passionate vocals weave in elements of Robin Hood, and rail against Mans stupidity in following the wrong leader (as apt now as it was then, maybe even more so) and as it builds, it draws you in and it astonishes me how a complex and intricate piece of music like this achieves its power by minimal instrumentation.

Party Piece has a wonderful cyclical riff, with some great lyrics about the human condition, Rogs observant lyrics reflecting the obsessions of youth, and, as is evident throughout the album, Rog is one of those vocalists who doesn’t just sing a song, he lives it, and the closing part has an element of Jethro Tull to it, which is no bad comparison, as both Rog and Ian Anderson have a keen eye for human observations.

Speak for Yourself has a funky riff and another politically astute lyric, suggesting that people think for themselves rather than following the pack.

Conclusions is another epic on the album, clocking in at over 7 minutes long, with it’s brilliant guitar work, and the way Rog manages to make the guitars and bass sound like a much larger band, is a great skill, and brings the most out of this fantastic track that has some fantastic acoustic and slide guitar work, with an almost classical feel, again reminiscent of the work of Ant Phillips, and another impassioned vocal, as Rog lives the song, and builds it to it’s epic conclusion.

Another great example of where less is more when it comes to instrumentation and production.

The original closing track Flightless, the 12 minutes title track, is, as Rog describes the musical interpretation of Becketts Knapps Last Tape, which is a song about itself basically, referencing how it came to be, and how Rog ended up where he ended up, again wrapped up in some of that wonderful guitar work and vocals, rounding the original album on a high.

The three bonus tracks (Alien, Couldn’t Happen Here & The Name Of The Rose) all showcase the way that Rog was intending to go if he’d managed to get his next solo album finished (a work rate that makes Tom Slatter look like Prince by comparison..) and are fantastic additions to the album, rounding out the work of this period.

This is a great-lost folk/prog/protest album that ticks all the right boxes musically and lyrically, well observed, well produced and an intelligent and emotive listen that will finally get the recognition it deserves.

It’s just a shame that nearly 30 years on from it’s release, the political and human concerns observed on here are still current, and still causes for concern today.