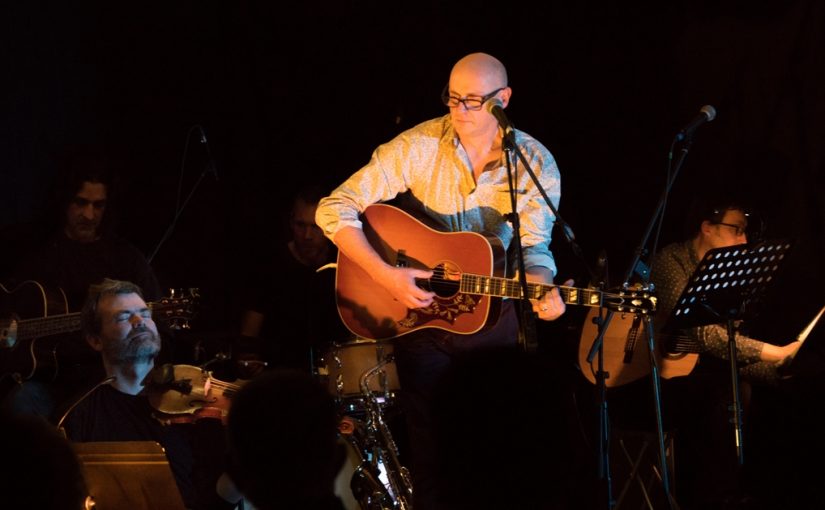 A huge thankyou to Howy White for use of his excellent pictures!

“Why will people pay £3 a time for a fancy coffee and yet complain about forking out £10 for a gig ticket for two hours plus of excellent live music?”

The definition of frustration for a music lover like me. The thought came to me on Tuesday afternoon as I sat in a motorway service station branch of Starbucks sipping my £3.20 Flat White that had lasted me less than 10 minutes. The previous Saturday evening me and my better half Sally had made the trip up to Hartlepool to see my good friend, and excellent folk musician, Lee Maddison perform to over 100 people at the cricket club and what a bloody superb night it was.

Not only was Lee performing tracks from his new Maddison’s Thread album, ‘Sixty Minutes An Hour’ (released the day before), but he was also playing with a full band including a string quartet. Yes! a string quartet! In Hartlepool of all places! For us it was a two hour drive up to the venue and then two hours back again in a pea soup like fog but, believe me, it was worth every minute spent on the road because live music, when it is as good as this, is what life is all about, well mine anyway! The evening started with a catch-up with some of the great people I have met through music in the North-East. Brendan Eyre (he of Riversea and Northlands fame) was there and we had a good chin wag and me and Sally spent the evening in the company of long time supporters of Lee, Howy White and his wife Amanda. Howy is a well known photgrapher who takes Lee’s publicity pictures (and all the pictures of this live gig) and Amanda is a talented artist who has done the cover art for both the Maddison’s Thread releases.

Then, as the enthusiastic audience quietened down, Lee introduced the opening act, folk singer Edwina Hayes, who hails from my neck of the woods and also sings on this latest release. Edwina has a delicate songbird-like voice which works perfectly with her pared back acoustic guitar to give a wonderfully fragile performance. She has also perfected the art of in-between-song banter and regaled us with some really funny stories. Hopefully, one day, her ‘stalker’ Martin (not me by the way!) will get his way and she will release another album but, in the meantime, if you get chance to see Edwina play live then do take the opportunity. Her thoughtful and insightful lyrics really hit a chord with the audience and I thoroughly enjoyed her performance, especially the refined version of Dylan’s Mr Tambourine Man with which she closed her set. After a short break it was time for the main attraction and Lee had taken the decision to split his show into two sets. A first set of more laid back, acoustic music and a second with, as he put it, a bit more oomph!

From the first self-titled Maddison’s Thread release, a beautiful rendition of Where Eagles Fly got proceedings of to a perfect start. Lee has a very unique voice and he was totally on form this evening and the added immediacy of a live peformance gave an added touch of vivacity to the songs. In a live setting The Fledgling from the new album had such meaning it left a lump in my throat and the flute was just wonderful. The audience were just rapt and carried on by a wave of emotion as Lee carried on with the simple, wistful charms of Weightless, a song that seems to have its childlike innocence exacerbated when performed in front of an enthralled audience. The nostalgic feel was lifted by the jaunty feel of Making The Morning Last, feet were tapping on the floor, heads were nodding in time with the music and those who knew the words (quite a lot, surprisingly) were singing along with the chorus. The impish and perky strings (especially Stuart’s expressive violin) gave a real playful feel to the song and the applause that followed was thoroughly deserved. Lee was keeping the audience entertained with a few anecdotes between tracks (mainly while he kept having to re-tune his guitar!). Next up we were reintroduced to the dulcet tones of Edwina Hayes as she joined Lee on stage for an engaging version of the country music tinged Love Like Autumn from the new record and there was a great rapport between the artists as they performed a delightful vocal duet backed by the ever impressive strings. A bewitching performance of perennial favourite The Viking’s Daughter (possibly the first track I ever heard from Maddison’s Thread) came next. Hauntingly sincere, Lee’s vocals have never been better and Stuart’s violin graced the track with its stylish and elegant brilliance. The first set was closed out with the childlike innocence of Jessica, dedicated to his daughter, a simple yet captivating song that lifted your heart and soul and the final track Don’t Say Goodbye. A slightly melancholy piece of music that was exquisitely performed and pulled on your heartstrings all the way through and then it was time for the interval, where had that hour gone? An utterly absorbing sixty minutes of sublime, delightful music that came directly from the heart and was applauded with utmost gusto. The second set opened with the funky jazz style of Night Circus, one of my all time favourite songs and it was immediately apparent that this part of the evening was going to upbeat and punchy. A really catchy tune that, played out in a live setting, was just about perfect. Lee’s voice took on a husky tone and the sax playing from Sue Ferris put a huge grin on my face. The evening was really rocking now. A song of highs and lows The Flycatcher had a subdued grace which blossomed into a powerful statement and was really intense live, leaving you in a thoughtful mood. Lee has the knack of writing some incredibly infectious songs and the title track from the new album is one of the best. Sixty Minutes An Hour really got under your skin, the haunting vocal and descriptive violin giving it almost a life of its own. I remember catching Howy’s eye and us just nodding at each other in quiet affirmation that Lee was ‘on it’ tonight, so to speak! The audience were clapping and singing along and the cheers, applause and whistling was increasing in volume at the end of every track. Whimsical, wistful and nostalgic, One Day is a song that seems to occupy a different time zone to the rest, the live performance took us to a place of repose and quiet contemplation where your worries just melted away. Lee’s voice was almost hypnotic in its delivery and the utterly chilled guitar playing contemplated it perfectly, utterly divine. From the divine to the acerbic, Lee’s voice took on a more edgy tone with the tale of ne’er do wrongs that is Charlatan’s and Blaggers. A tongue in cheek performance with more than a hint of cynicism, the barely held back vitriol was evident in the harder edged vocals and sardonic tone of the violin, a really great tune to hear live. That laconic, sarcastic feel carried on with Tumbleweed and it was delivered in a style not too far apart from Bob Dylan and Neil Young, Lee letting a feel of world-weary pessimism creep into his voice perfectly. Stuart matches that irony with his staccato violin playing, almost derisive in places, I loved it. I know Lee Maddison is extremely proud of the track A Thomas Hardy Evening and rightly so. Played live to a receptive audience it was one of the highlights of a memorable evening, the subtle splendour of the vocals and the refined dignity of the music really come through and I was left a little open mouthed at the end. Serious and thoughtful, Lines On A Fisherman’s Wife was another highlight of the evening for me. A traditional folk tale, Lee infused it with a somber, downcast and yet sweetly earnest tone. The audience greeted it with a hushed reverence, listening to every word. A really exquisite performance of what is such a dignified and reverential song. Paul Donnelly’s superb guitar is what I immediately noticed when Chasing The White Dove began. A slightly frenetic song that careered along at its own pace and one to which you couldn’t help but tap your foot. The evening was really in full swing now and the audience were lapping up what was being presented to them, some of them were even dancing at the back. One of Lee’s most biting and satirical tracks, Parasiteful was given even more caustic acidity in the live arena. Biting lyrics delivered in a hard and unforgiving manner, you see the other side to this usually affable man’s nature and it went down a storm with the audience. This lengthy and utterly brilliant set came to a close with the upbeat Wonderful Day, a song that gets you singing along and bouncing in time with the music and the musicians were all on top form as they delivered a great crowd pleasing rendition. Everyone was one their feet cheering but, as you already knew, it didn’t finish there as shouts of ‘More, more…!’ echoed around the room, yep, it’s time for the encore! Lee knew he wasn’t going to get away with just one encore song and delivered two emphatic encore tracks, following Come Friday Night with a resplendent version of Lindisfarne‘s Lady Eleanor that had everyone clapping and singing along and the dancers at the back were up once more! What a brilliant end to a wonderful evening of live music.

Lee Maddison and his fellow musicians had delivered a welcome antidote to the trials and tribulations that we deal with on a day to day basis. Believe me, if you get  a chance to see him play live then do anything you can to get there, even if it means selling your children, he really is that good!

And, on another note, please do support these amazing artists, they don’t do it for the money and, without us attending gigs and buying their music, they wouldn’t be able to do it at all!

You can buy ‘Sixty Minutes An Hour’ here: