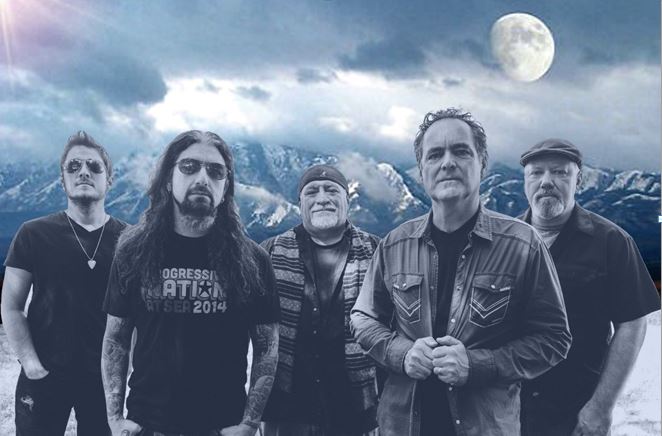 Everyone has an opinion. Either carefully constructed after reading up, researching and questioning all and sundry, or shot from the hip in nanoseconds without further thought of the ramifications of the snowball as it grows.

Neal Morse. Opinions on him are as many and verbose as is his output. Unlike his output, they are binary : either the “God” thing does it for you or it doesn’t..

Well I’m not going anywhere with that construct. I’m going to review the music. And there’s a lot of it on this album. ‘The Similitude Of A Dream’ is 2 CDs worth.

I was lucky enough to get a pre release mp3 file and listened with a view to scribbling a couple of pithy one liners about style over substance, myth or mistake etc, but then the hooks in the piece caught me.

Dragged me back into the musical world of Morse and his musical fellow travellers – Mike Portnoy, Eric Gillette ( fab guitar work here) the bass of Randy George, a fine partner in crime for the much maligned Portnoy and Bill Hubauer provides  keyboards to a fine standard.

A world class band of brothers who ooze musical chops at every point, but in an understated manner.

I described the album to a friend as “A Musical symphony without the W****y ELP bits. It has a theme that runs through and it matters not that this theme is based on a 17th Century fable. It’s as relevant as dragons, small furry creatures or starships when it comes to telling a tale.

If you loved ‘Snow’, a high-water mark in Spock’s Beard back catalogue as far as I was concerned, are familiar with Transatlantic’s epic widescreen albums and like a good melody , then this album will float your boat and tick all the boxes.

It’s epic in sound as well, great instrumentation link the themes as they get expanded and revisited across the 2 discs.

The similarity to ‘Snow’ is that once again, we have a protagonist who feels separated from all around, and sets out on a voyage of exploration.. I think? Or it’s a bad trip brought on by the dodgy narcotics offered to him in” Draw the Line”

Where was I? Oh yes. In a (wisely) unpublished review of Dream Theater’s ‘The Astonishing’, I made reference to ALW doing prog or DT doing musical theatre, with the results as horrible as expected.

This is the opposite, an album that is a musical   in a direct, song based way, no dodgy narrative clunkers or strange interludes here, just a collection of songs that fit thematically and musically. Oh – apparently it’s referred to as a Concept album. People like musical hooks to hang things on, for this, dust off the Genesis “Trick of the Tail” hook for the vibe in “The Ways of a Fool”. Add in Queen too for these are the first vocal harmonies to elicit them since Jellyfish popped up in the 90’s.

Then there are some very Beatles approved strings , a flash of Banksian keyboard prowess and some very Queen guitar before those harmonies kick in again. This track is rapidly becoming a firm favourite here.

The first CD builds to the climax of “Breath Of Angels”, which is the most overtly religious track , hardly surprising when you listen to the lyric, but the angel voices in harmony layered behind Neal as he exhorts us to the City Of Light… A New Jerusalem anyone? CD 2 doesn’t let go either. Unlike my CD player which refused to give up CD 2 3 times… is this a sign?

Anyway, we rock off at full speed with a keyboard flurry that Jon Lord would be proud of in “Slave to Your Mind”, then we have an appearance of a saxophone in “Shortcut To Salvation”, a west coast vibe to this one, a vocal tour de force from Mr M.

Then the crash out with their inner Zeppelin with the monster riff of “The Man In The Iron Cage”, it might be a Zeppelin riff ,but the vocals are pure Morse – no pastiche of Percy Plant here, Neal has a very individual voice and it makes him stand out in an army of clone vocalists raised to believe that karaoke is the way to sing.

Big keyboards again: Purple Zeppelin .This is  joy to my old ears. The guitar solo slides in, all flash and stylish restraint, linking to a gentle vocal and acoustic piece about God and faith and breaking out of self inflicted limitations – all very new age, but remember this is based on a 17th century tome, so new age is as fresh today as it ever was… Before the band crash back in with the hook laden choruses. If I was a singer, I’d be singing along… and rocking out with my air guitar, Gibson Les Paul of course. The Neal Morse Band have a way with a tune, they sprinkle their own stardust on the tunes here. Thematically linked to the story, the songs follow the narration or rather are the narration as there’s no cod theatrical voice over needed. Listening again, it’s the natural flow of the words and harmonies that impress.

Not only have they got me contemplating life’s metaphysical journey and the pitfalls therein, they’ve also got me wanting to read the words to better follow the twists and turns they guide us through.

CD2 builds from the charging stomp of ‘Iron Mask’ to a contemplative piece with fretless bass and strings, a mellow little piece called “Sloth” which leads into one of  those “Oh So Neal” songs – all campfire acoustic guitars and sing along tune a pleasant reminder of “Wind At My Back” from ‘Snow’, here titled “Freedom Song”.

The clever use of the upbeat music to convey the joy of the protagonist unburdening himself of the burdens stopping him is simple and effective.

You get the old time gospel hoe down distilled into a song full of hope and optimism. We then get the big finale. The crowd are warmed up by “The Freedom Song” / “I’m Running”, featuring some fabulous bass dexterity and a nod to Phil Collins big band tub thumping full spectrum production with the kitchen sink relegated to 3rd sax…

This nasty little voice in my head is playing spot the Genesis reference now. “Confrontation” intro had me thinking ‘Eleventh Earl of Mar’, don’t know why as couldn’t hum it to win a pint, so where that popped up is anyone’s guess.

Most Un- Abacabish is the instrumental breakdown which sounds like the you tube cat got not only the Theremin but the rest of the instruments too. ‘Back to the City of Destruction’ qualifies as the most depressing hook line to any song ever, but the Deep Purple Hammond flurry after it erases such piffling triviality to a foot note.

We are into big bold grand piano chords and time changes now, classic “American” Prog where technical flash breaks free from pious restraint and madness ensues as they fight over the direction of the piece, aptly called “The Battle”, the piano and keyboard here are fantastic, a bit ELP in bombast in places, a bit Benny Hill in others (listen – you’ll know what I mean).

Sadly it means rather than the cataclysmic battle of Armageddon, it comes over more Ernie the fastest milkman for me, but it’s a small price to pay for the joy of the piece.

The climax, “Broken Sky / Long day“, delivers everything you want for the finale.

Heartfelt vocals over subdued instruments that builds , you can tell that the end (of the song) is coming, and your heart lifts as the song unfolds  it’s wings, shakes them free and prepares to soar.

And soar it does with a lovely keyboard flurry and full Morse the Evangelist vocals, with a guitar part that didn’t trigger Genesis associations …

Sorry, that little cynical voice appeared again. Ignore itt. The most iconic of guitar solos will obviously echo through space and time…

Better that than the Jonas Brother‘s attempt…

The sums of the parts with this piece greatly outweigh a few “borrows” here and there.

I loved it and I’m neither A born again American or An American Born Again.

The production, songs, package and playing on this are all woven together to create a modern classic, for once the praise surrounding this project undersells it, it is that good.

Buy ‘The Similitude Of A Dream’ from Radiant Records