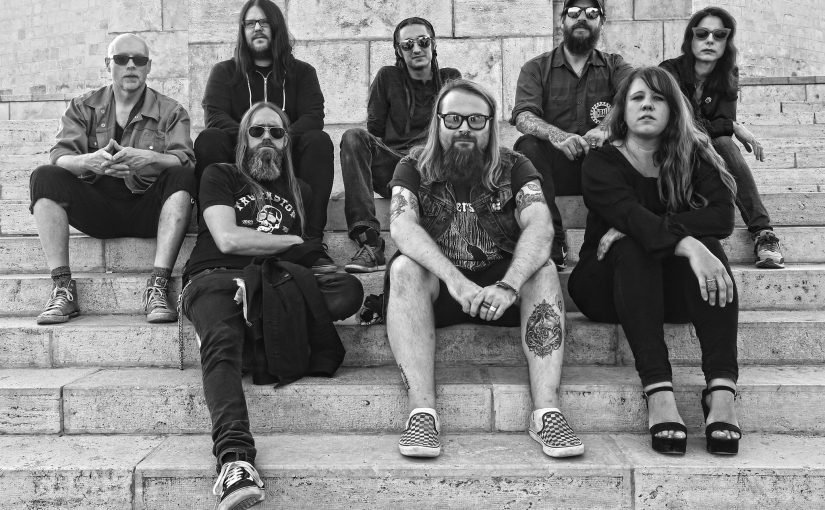 I have a love hate relationship with post rock. It depends on the weather I think.

Someday a gumbo mix of old Black Sabbath riffs, Bauhaus vocal growls and thundering Bonham influenced drums hits that spot. Other days the “everything louder than everything else” mantra grates and I want a simple clean palate of sound.

Crippled Black Phoenix (CBP) take pride of place in my collection as the only stoner/ Rock/ post rock band that I like. Their albums are dense, complex affairs, their live shows are powerful multimedia events and the band themselves look as if they’ve been auditioning  for the part of the  Swedish Biker gang in “The Girl With The Dragon Tattoo” series. I will confess now, I loved their version of Echoes that came out last year, it was a deserving cover that took the original off into new directions whilst retaining the musical core. I liked it so much that I tracked down both versions, sad…

On their latest album, ‘Bronze’, CBP tick all the boxes for my Post Rock checklist. There are all of the above and one crucial factor often missing from albums today, a sense of theatre and dynamic.

We all know the quite / loud/ quiet / shouty formula for songs. Post rock goes for a calculus derivative of that with fractural loud / loud/ full throated roar. There is that underlying melodic core to their songs that Pink Floyd use, alongside the power and menace injected by the Heavy Rock Sabbath influenced riffs and drums.

Track 5, Champions of Disturbance (Pt 1&2) for example , at the 4 minute mark goes off on a boogie that is equal parts Run Like Hell and Paranoid. It shouldn’t work but it does. I want to turn the amp up to eleven and introduce the whole street to this glorious noise.

This is all things a great rock album should be: Loud, full of power and menace, but with glorious tunes and riffs that make you want to play air guitar to.

There are subtle touches hidden among the noise too, great little Rock n roll piano at the end of that track, some nice snatches of dialogue interspersed among the songs, even a brass section at one point.

There are thumping drums, great guitar parts that layer and build and build to a point of almost obscene climatic release.

Some bands make the most awesome racket and are let down by the singer. Too clean, too growly, too weak, too OTT. No such issues here, every track has a vocal that works, from quiet reflective musings to the powerful rockier numbers, Daniel Änghede and Belinda Kordic sing with passion and skill throughout.

I’m listening for the 4th time now and I’m enjoying the nuances unfolding. Some lovely drum and guitar on track 7, Turn To Stone, remind me of the middle of “stranglehold” by Ted Nugent, where he scrapes his plectrum down the strings before ripping a glorious solo, the superb guest vocals are supplied by Arvid Jonsson.

Nugent is a dick, politically as far as I am concerned, but that track is sublime. CBP tap into that feeling here, this is rock music, big rock music.

I don’t know what the tracks are called (Ed. – don’t worry, I’ve helped you there…), but it matters not as it’s the “feel” I meant to convey.

This album is progressive and retro in equal measures. CBP are determined to forge their own path, if that path needs a detour into a forest of gothic beauty, as in track 8, Scared and Alone, where celestial distorted sounds underpin Belinda Kordic’s vocal before a Big Country type guitar leads us out onto the path, then they go there without fear and we wander along with them, out into a clearing  where Justin Greave’s guitar makes with the Pink Floyd inspired playing  before we stare back into that gothic forest again , mournfully now as Robert Holm’s Brass Section appears, not to soothe but to twist and snipe alongside the angry and menacing vocal. The sweet forest is now a threatening black mass of trees blocking out the light, but hope is at hand as the celestial sounds returns and this gothic musical journey ends.

If you liked The Mission, the Sisters of Mercy, Classic Pink Floyd and a bit of good old Black Country riffage, then this is for you.

I’m sure that there are bands out there that are “heavier”, more technical in their approach to playing, but this is, to me, what a “Rock Band” should be doing. The dynamic of the album, even in preview mp3 quality, is impressive. Cranked up it sounds great. There are lovely little piano pieces before the drums explode and fill the spaces. The guitars are in places shoegazingly monotone, as the songs unfurl they gain in definition, the soundscape broadens to encompass keyboards and layers of drone , all mixed, all ebbing and flowing in the mix. The songs are allowed to stretch and run to over 5 or 6 minutes, but without getting dull.

My Grandfather would approve of this album as there is a place for everything and everything is in its place.

My review file had 10 tracks, running for just over an hour. It’s an hour well spent.

There is a deluxe version of the album that has2 extra tracks. I have ordered it , although the  double clear vinyl album version looks tempting . Whichever version, it will be a thing of dark beauty, a proper “rock” album for the modern age.

Pre-Order ‘Bronze’ from Season of Mist