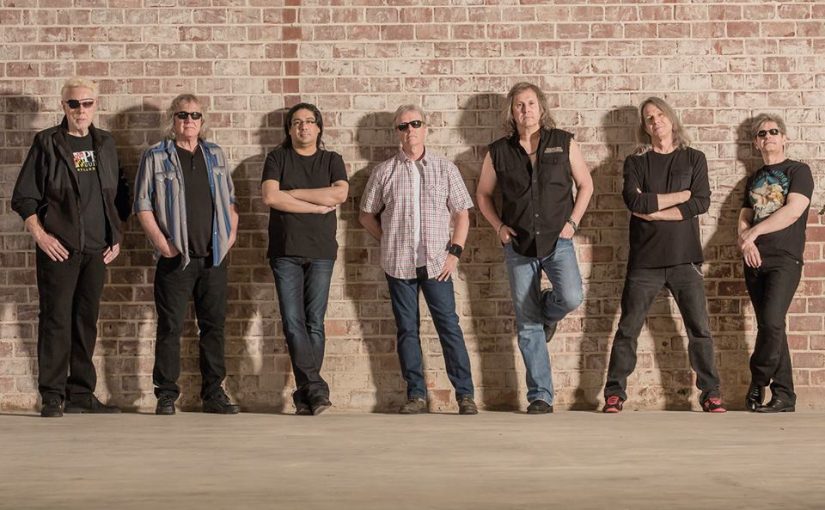 Confessions time this review is proving trickier than I thought.

I discussed writing it with a friend who’s far more erudite… a transcript follows:-

Me: Morning. Am still struggling with Kansas CD, are you an expert in them?

Learned Friend: in what sense?

Me: I have listened to this new one 6 or 7 times now and it just glides over me,it just seems to get going and then fades into the ether

Learned Friend: not heard it, so I can’t say, are you reviewing it?

Me: Yes, For Wallet Emptier. They seem to straddle a fence between rock and Prog, neither one nor the other..

I’ve written the review twice and it’s still not my thing.

Bits have grown on me

Me: Good Plan – wonder if Martin would let me get away with it?

Learned Friend: How long do your reviews have to be?

Me: no limit. Never word counted them!

Learned Friend: are they the sort that has to dissect each track or can you just give an overall opinion on the album as a whole

Me: I can do whichever I wish, mine tend to wander around the field a bit as the album is on stage, more o f a feeling rather than a dissection. I can’t do the time signatures / minor major chord bollocks, It either grabs me or it doesn’t

Learned Friend: I hate the ones that go through the track list telling me which each track is like (especially when the album isn’t even out for me to check) – I just want the “good for a rainy day, great in the car” “man this sucks” kind of review. No time signature stuff is excellent! That stuff is for nerds and I don’t like the “I’d better say it’s good otherwise they won’t send me any more free CD’s” reviews either.

So, In the cause of balance and “No Free CD’s for a bad review” Here’s what I thought about Kansas’ new album:

I wrote about his album yesterday. It was more of a rant: I had decided I didn’t like it for the following reasons:

For sounding like the bastard offspring of REO Speedwagon and ELO.

For the singer whining on and on about nothing in particular, being more of a karaoke singer than a rock singer, more musical Theater than Dream Theater…

But my computer is obviously wiser than me as it has “lost” that piece.

Probably for the best as it was incoherent, rambled on and offered nothing new.

Bit like much of the album the devil on my shoulder whispers maliciously, whilst the angel on the other shoulder says that I should play nice and talk about the bits that sound like Spock’s Beard (Instrumental break in track 4 , Rhythm in the Spirit) the track that I will be adding to my MP3 player ( Section 60)  Or the song that sounds like “Dust In The Wind” (Refugee)

That last one is playing now, it should be a heart breaking paen to the plight of the disposed, but the vocals make it sound as traumatic as having to wait for the green man to appear before crossing an empty road.

The vocal harmonies are trying to be emotive, but I must be a callus twisted person as I remain immune. The instrumental break is almost Celtic with the minor chords of the keyboards floating along with the violin , painting a sound picture of an empty road , whether a road to hell or a road to nowhere I am not able to decide as the track just stops.

The atmosphere is sucked out as quickly as the potatoes in the Martian when the habitiat decompresses. The result is just as catastrophic.

I’m thrown back into AOR bland land, this singer is good, but in the wrong band. Either that or I am missing something.

To me, great vocalists are individuals; you recognise them from the merest vocal hiccup or inflection. They are the living embodiment of the lyric. AS I mentioned before, this is more like an X Factor audition, all technique and no soul.

The band try hard , there are some nice interplays between violin, guitar and keyboard / orchestra on track 6, but it’s all very widescreen and a bit primary TV- pleasant, inoffensive and a wee bit formulaic.

Track 8, Summer, is a jaunt bouncy little tune, featuring another 3 way battle between guitar, violin and keyboards. Sadly, it lacks grit though, the singer again detracts from the feeling by sounding breathless and the lack of power in his voice let the side down.The lyric too is a bit wishy-washy. He warbles on about never regretting that summer. But doesn’t elaborate any further, so we can only speculate as to the trauma that caused him the regret – losing his paper round? Finding out that he would have to go back to school at the end of the holiday?

Once again, the track stops suddenly without warning, almost causing the following track to crash into it.

Another  3 minutes or so of vague pomp and we reach the only track that I think will get repeat plays – the rather strangely titled Section 60, starts as a middle paced power balled score, with the triple faced instrumental front line  swelling and building to a peak .

Here we have the big guitar moment, all dry ice and spot lit gurning, with the violin in counterpoint.

And this is the bit that gets me – as the music fades to a violin and a military snare drum cutting through and playing out to fade. No coda, no lyric, just this echoed drum pattern that fades into the night. It serves as a flicker of hope after the battle, poignant and powerful.

I get he image of the aftermath of a great battle, the drum and violin painting the silence after the bombast and fighting has ended, the smoke clears to show the dead, the dying and the small group of survivors banded together, walking off into the sunset.

Clichéd, yes, but then that’s this album through and through. It is anachronistic in that it could have been made in 1976 when the band were at the top of their game and  FM radio needed a steady supply of anthemic songs to power the great American dream.

Instead, here we are 40 years later and the rest of the world has moved on. I am sure that many will listen to this with the aural equivalent of rose tinted glasses, the music taking them back to that mythical summer of ’76.

If you liked Kansas then, you’ll probably love this – I sneaked a read at reviews on that tax dodging site – yes, the fans are claiming it as the second coming, so I’m going to annoy people again but it did nothing for me, failed to inspire . A C+ album if we graded such things.

Buy ‘The Prelude Implicit’ direct from the band.