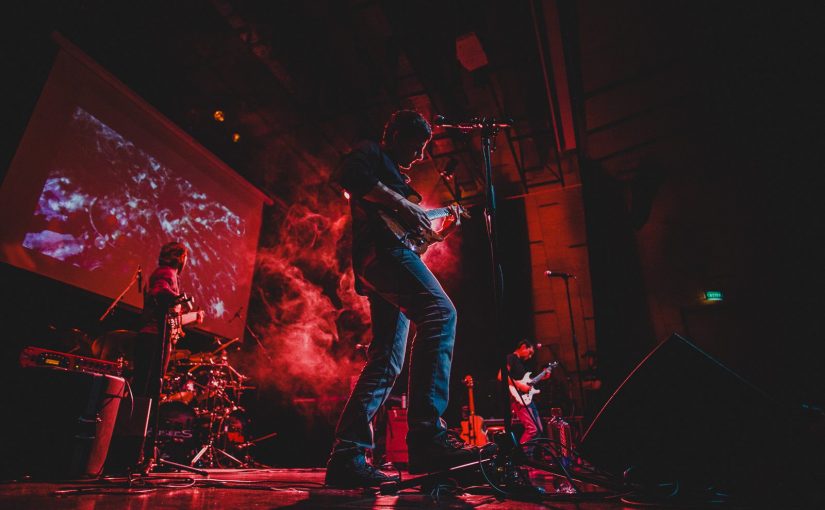 With their new album, ‘Hawaii,” Aisles have released their version of the obligatory conceptual prog double album. As such, it hits many of the prog checklist items: longer tracks, extended instrumental sections, some experimental choices, a loose concept that can be a little hard to follow at times, and gorgeous cover art that tells a story in its own right. However, ‘Hawaii’ never comes across as perfunctory, and the band’s eclectic mix of musical styles–leaning more heavily on jazz-fusion and world rhythms than on ‘classic prog’ or hard rock–brings some fresh air to the project.

The first LP opens with a two part reflection on The Poet whose art and message had gone largely unheard. This pair of tracks serve well as an opener, expressing both the lyrical themes (a warning about the destruction of the earth/loss of uniquely human experiences) and the musical pallette (big band drums and jazzy lead guitar that moves into Welcome to the Machine-esque sinister moodiness, then continues through several stylistic changes). The rest of this first disc continues with premonitions of coming tragedy. Upside Down is a highlight of the album, and one of the more condensed musical and thematic statements here. There are two opposing forces at work in the world–destruction and creation–both with their power to to turn the world upside down in their own ways. “Some only take and some just destroy, and others they create/Some give their hearts and some are so bold/That they can turn any world upside down.” The second LP focuses more on lament and longing for the good things that have passed away. The album’s many references to sun, rivers, walks, etc. develop the thought that the greatest loss in the earth’s destruction was not cultural or technological–these human inventions seem to have carried on in the settlement of the solar system–but in the destruction of the non-human beauty of the natural world that provides the conditions for fully a human experience. This is expressed in the mournful Terra and on the title track, Club Hawaii, which features a spoken intro explaining that the club’s five floors each contain wonders to tantalize all five senses, every floor more intense than the last. The patron’s question, “what’s on the top floor?” reveals the album’s theme of longing for the deepest, most thorough experience of human sensuality, especially in relation to the beauty of the natural world and humanity’s own natural, physical existence. Thus, we hear the club’s visitor implore “Turn my soul into flesh and soil/And blood, and waves and sand and rocks/And cliffs and sex and dogs/And apes and frogs and dirt and rust/And screams and lava, lava, lava, lava, lava.”

Throughout the album, there are nods to classic progressive music: some of the keys/synths are reminiscent of late 70’s Rush or mid-70’s Pink Floyd, while the jazzier leanings share some commonality with Caravan, but Aisles are clearly not interested in the more nostalgic-leaning approach to prog. The influences are there, but they remain influences rather than templates. ‘Hawaii’ is a cohesive, moody incorporation of emotional rock vocals, jazz fusion instrumental sections, and jazzy world-music accents, especially in the rhythm section. There are a few shorter songs that act as segues (Nostalgia) or postludes to the preceding track (Year Zero, Falling, which is a nice hint at the kind of mournful ballad that Freddie Mercury sang so masterfully), but the narrative tends to be moved forward by longer, sprawling tracks. These avoid the prog-rock epic approach to composition, instead opening with quieter guitars and slowly unfolding. The album  is, on the whole, much more about the ‘progressive’ rather than the ‘rock’ as it is usually practiced in the contemporary milieu. That’s not to say the album doesn’t get loud or intense, but the mood suits contemplation more than consternation. This is an album for a late night, sitting alone in low lighting, with a favourite and suitably complex beverage in hand. And have some refills at the ready, because ‘Hawaii’ rewards repeated listens. The composition is too sprawling and the theme too subtle (as a nice counterpoint to some overbearing narrative albums) to be grasped immediately. It requires some commitment from the listener up front, before it will reveal the intricacies of its emotional core. With some careful attention, however, its beauty will shine through.