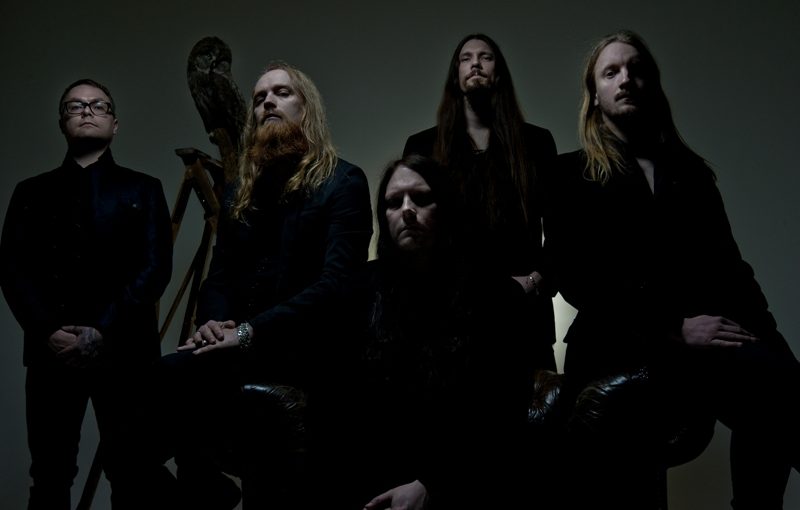 When 2016 draws to a close and I begin compiling my “best of the year list” one album that is definitely going to be near the top is ‘The Fall Of Hearts’, the quietly brilliant 10th album from Katatonia.  It’s the “sleeper hit” of the year in my opinion.  It’s not the most flamboyant release; it’s not aggressively pushing boundaries or showing off how technically proficient the band members are at every opportunity.  Instead it’s an album of subtle nuance and variation, the sound of a band perfectly comfortable in their own skin continuing to evolve and improve along their already distinctive path.

‘The Fall Of Hearts’ is the first album of new studio material in 4 years and also marks the debut of a couple new members to the fold; guitarist Roger Ojersson and drummer Daniel Moilanen (who really makes his presence felt in the arrangements).  In the intervening years since 2012’s ‘Dead End Kings’ the band has been focusing on stripping down their sound, first via the remix album ‘Dethroned & Uncrowned’ and secondly their live acoustic concert recording ‘Sanctitude’.  The lessons learned from this approach have carried over to the new album, adding subtlety and space to the arrangements and allowing the new compositions to really breathe and flow.  Katatonia’s compositions in the past were often more straight-ahead than others within the Prog Metal field, being primarily based off a standard verse-chorus-verse structure.   ‘The Fall Of Hearts’ offers a much more impressionistic approach, the more fluid nature of the arrangements really showing off Jonas Renkse’s gorgeous melodies to greater and more dramatic effect. Opening track Takeover is an excellent demonstration of how this new approach has been applied.  The song starts abruptly without an intro, immediately dropping you into its melancholic setting.  The rhythmic thrust of the song is understated, dreamlike; it creates the subtle impression of floating.  This feeling remains even once the heavier guitars come into play around the 1-minute mark.  There is something very “painterly” about the feel of this piece; it’s elusive, ethereal, like watercolors in varying shades of gray.  It’s simultaneously lovely and haunting, the metallic elements used effectively to create a subdued feeling of menace lurking just below the surface.  It’s a stunning beginning to the album and invites the listener to abandon their preconceived ideas and just let go, just experience it.

The unique feeling also presents itself on the more direct, mainstream songs on the album.  The singles Serein and Old Hearts Fall are deceptively accessible, the melodies so inviting that the listener might not even notice that the underlying arrangement is still quite complex and unexpected.  That is not an easy balance to strike for any band, especially in the Prog Metal genre, which is not exactly well renowned for subtlety.  Yet even the heavier compositions on the album never lapse into the expected clichés, they never get as militaristic or bombastic as you expect them to. The heavy riffs are applied with the same level of care and precision as the more melodic sections. Katatonia is often mentioned along with Opeth when the discussion of Swedish Prog Metal comes up.  Jonas Renkse and Mikael Akerfeldt were roommates in the late 90s and remain best friends to this day.  Mikael also contributed the harsh vocals to their classic early death-doom album ‘Brave Murder Day’.  While there are similarities (especially in the approach to ballads) overall Opeth is a lot more extroverted in their approach and cover a lot more stylistic ground.   There is an undeniable kinship between them however, which presents itself in a few occasions on ‘The Fall Of Hearts’.  The beautiful acoustic-driven ballads Decima and Pale Flag show an affinity with Opeth’s ‘Damnation’ album and one of the albums heaviest tracks is Serac, which wouldn’t sound out of place on ‘Watershed’.  But in reality the main thing these bands have in common is they both have very distinct, identifiable personalities and they are both led by very gifted singer/songwriters.

‘The Fall Of Hearts’ is a long album (67 minutes not counting bonus tracks) and thus takes a little while to fully reveal itself, but it’s such a rewarding experience that the effort is more than repaid.  I’m partial to the second half of the album, which gets a little darker, heavier and more complex yet never loses the melody and accessibility.  The light/heavy dynamic is used to great effect on tracks like Last Song Before The Fade (my personal favorite), The Night Subscriber and the uncharacteristically extroverted Passer, which allows new guitarist Roger Ojersson a turn in the spotlight.  It also features Shifts, one of the most hauntingly beautiful songs I’ve heard this year in any genre.

While there are many albums from 2016 that have gotten more hype and publicity than ‘The Fall Of Hearts’, I’m not sure if many of them attain the artistic cohesiveness that Katatonia has achieved here.  This album took me completely by surprise, slowly worked its magic on me over the course of several months until it became indispensible.  Now hardly a day goes by where it doesn’t end up in my stereo at some point, still methodically revealing its charms, becoming ever more rewarding with each listen.  The very definition of a “sleeper hit”.

Buy The Fall Of Hearts direct from the band