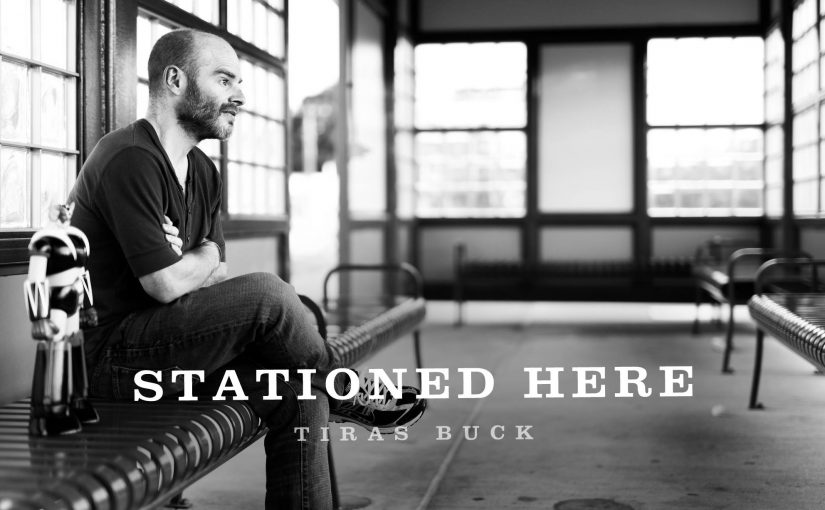 “His voice was cloves and nightingales, it took us to spice markets in the Celebs, we drifted with him on a houseboat beyond the Coral Sea. We were like cobras following a reed flute.”
― Janet Fitch, White Oleander

I don’t hide the fact that I love progressive rock and its offshoots but, in reality, I just love good music. Be it blues, rock or just one man and his guitar, if it resonates with meaning, I’ll like it.

I do like a good voice and US singer/songwriter Tiras Buck has a really good one. It is full of emotion and has a little catch which makes it instantly recognisable.

Tiras hails from Pennsylvania, USA and has a musical style that takes chunks from the progressive genre but adds in symphonic tendencies and lush harmonies and strings to deliver a powerful emotional kick. On ‘Songs for Parked Cars’, his first full release, he enlisted the help of Echolyn’s Brett Kull and Paul Ramsay. Described as, “solitude and derisive introspection as soundtrack”, it is “emphatic pseudo-progressive anthems bonded with recurring themes.”

Brett (bass, guitars) and Paul (drums, percussion) join Tiras on his second album, ‘Stationed Here’, and after saying, of his first album,

“If you love well written music of any genre, if you appreciate music that mirrors the mind, heart and soul of the musician then, you will love this album.”

I was intrigued to hear what this accomplished musician had come up with next. Opener All Over You Again is a plaintive ballad-like track that begins with a delicate acoustic guitar and Tiras’ haunting vocal plucking at your heart strings. He has a touch of Adam Duritz to his voice but with a catch that makes it unmistakably Tiras Buck. This song seems to gently touch your soul as it meanders like a summer stream across your psyche. As the drums join in, subdued, and the vocals harmonise, there is a feeling of something building up, a slight tension to the atmosphere. The song opens up fully with the percussion giving it substance and the guitar breaking out and backing Tiras’ vocal perfectly. A delightfully whimsical opening to the album.

What We Were (including Mountains) has another waif like acoustic guitar intro and Tiras’ vocal begins like a lament. More ardent and piercing, it bleeds emotion. The simple contrast between guitar and vocal is striking and shows what an instrument Tiras’ vocals can be. There is an upswelling of guitar and drums and then a delightful harmonised vocal that just intensifies the impassioned feeling of the song. When they string-like keys appear, they back the heightened delivery of the vocals and give an additional gloss to this already impressive track. The intertwined harmonies of the vocals demand your attention and you focus on the engaging delivery almost at the expense of the rest of the music. The guitar and keyboards bring the passion down a few notches before we segue into the second part of the song, Mountains, which has a harder, more straghtforward rocking feel to it. Brett Krull’s fuzzy riffing and Paul Ramsay’s dynamic drums give it a feel of some of the more in-your-face R.E.M tracks and the vocals have a slight warbling quality to them, a quiver that gives Tiras’ voice a real honesty. You can even feel the influence of Brett Krull’s production skills that give a little soupçon of Echolyn to the mix. The Title track to the album, Stationed Here, is my favourite song on this release, it has a real wistful sincerity to it, starting with the graceful acoustic guitar that has an almost ethereal quality. The vocals are delivered with a nostalgic, almost rarefied feel and this gives the song a radiant aura. You seem to float along on an insubstantial cloud of musical delight as the chorus gives substance to the refined music. Drums and keys join in, most dignified, adding to the atmosphere and this most sublime song plays with your emotions as the voices intertwine around each other. This is Tiras Buck at his absolute best as his powerfully emotive voice pleads to the attentive audience.

A mellow piano note introduces I’ll Follow You Down which, along with the moving vocals, gives a touching note to the song. There’s a dreamlike quality to this track that leaves you feeling calm and collected, just keyboards and poignant vocals before the percussion adds in another layer of longing and wistfulness. To be fair, you could, and should, just lay there with your headphones on and let this feel-good track wash over you, there is natural warmth to the song, like late afternoon sunshine on a hazy summer day. When the guitar joins, there is a welling up of emotion inside you, yearning for a simpler life that feels forever out of reach, this song touches you deep into your heart. Me And Denis Leigh is a stripped back track that brings to mind Paul Simon. A hushed vocal and fragile acoustic guitar give the song a purity of heart and soul and the wonderful vocal inter-plays really stand out. I sat transfixed, listening to this piece of music that takes Tiras’ soul and strips it bare for all to see and hear. This wonderful musician has a sincerity that shines through all the commercial bullshit that is thrown at us on a day to day basis. The song builds up momentum with the stylish percussive talents of Paul Ramsay and the expressive guitar work of Brett Krull backing the impeccable vocals of Tiras Buck and his backing singers. It is uplifting to the core and leaves you in a better place than when you heard the first note.

Tiras Buck is one of those musicians who writes music because he wants to, there’s little thought of commercial gain. He has this deep vein of incredible music talent running through his very soul and, thankfully for us, he feels the need to let it out in song. A superlative songwriter with a voice that transfixes you, he deserves greater recognition and , hopefully, albums like ‘Stationed Here’ will give him it!

One thought on “Review – Tiras Buck – Stationed Here – by Progradar”