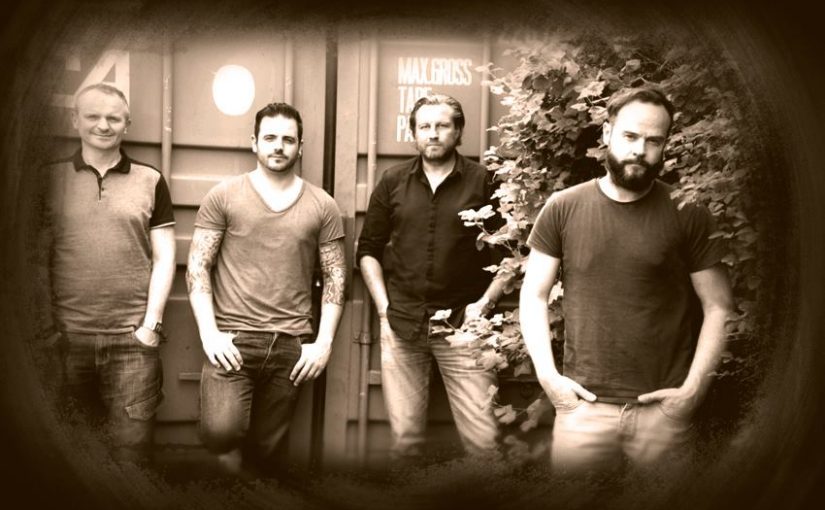 Bob Dylan had The Band, Fish (he of many great albums with and without Marillion) has TILT.  Like The Band, they have broken free from the cover of the piscatory one and now have their own well formed sense of identity.

TILT  are Robin Boult, David Stewart, Steve Vantsis, the core of Fish’s touring band right now, with Paul Humphreys on guitars  and PJ Dourley on vocals, featuring guest appearances from It Bites’ John Beck and John Mitchell (of band and Projects too many to mention) to back this solid product. Mitchell also mixed the album.

Vantsis and Dourley are the main songwriters here, with Humphreys credited on two tracks. One thing is certain, this is NOT a Fish album minus a piscatorial element (no more Fish puns I promise).

It is going to be argued that this is not Prog by some but I will disagree in the strongest terms. 3 of the 8 tracks come in at over 8 minutes and none under 4 minutes. Sonically this is a very dense album typified by’ No Superman’ which reminds me of something that Soundgarden would be proud of but with far more layers and texture to separate them from a ‘grunge-like’ song to something far more up to date and of the present

P J Dourley’s voice is a dream throughout the album, at times it is sullen and yet can soar, expressing the lyrics and meaning of the songs to use his voice as an additional musical instrument as well as a singer. On ‘Growing Colder’ he shares the music with just the voice and a piano without loss of emotional content and delivery.  the social and emotional isolation of the song is reflected in his voice extremely well indeed.

‘Bloodline’, the current single, has an astounding guitar solo in it from John Mitchell that feels like a vampire suffering depression and with rage issues in a good way. It’s a straight ahead rocker and one I intend using next Hallowe’en  but far more subtle and textured than any regular rock track.

‘Hinterland’, the title track of the album, is a thorough, out and out, stab at prog metal with a great degree of success.  It’s accessible and has all the elements you would expect without sounding contrived.

Although not a declared concept album by the band it appears to be an album of loss, grief and cynicism of the human condition. ‘_Assembly’ and ‘Disassembly_’ bookend the album and they seem to be a treatise on the futility of war, a rage against the seekers of power through religion. It shows how prog this album is by relying on keyboards and soundscapes to illustrate the setting and the tone.

Musically this is very tight indeed and I imagine it would transfer to the live stage very well. The album overall is very accessible and good on the ear but there is nothing of the traditional “Pastoral Prog” to this album but if you like your music in the Dream Theater, Anubis style, or Spocks Beard, Transatlantic in their heavier moments, then you have a new item for your shopping list.

If you want Prog for a brave new world then this is for you and, in a year of standout albums, so far this is one that I believe will stand the test of repeats. It will be in my top 10 of 2016 and its only June.

Buy ‘Hinterland on CD from The Merch Desk

Buy ‘Hinterland’ on CD from Just For Kicks (Mainland Europe)