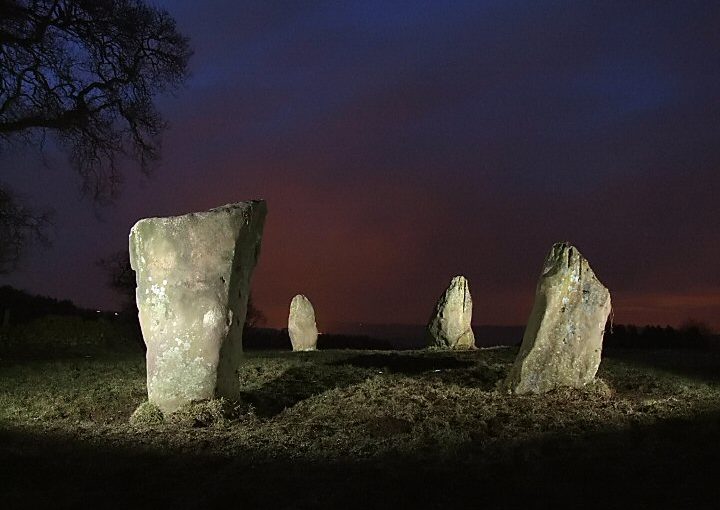 The band Nine Stones Close is named after the remains of an ancient stone circle (see the featured image) situated in the Peak District of Northern England near where Adrian Jones grew up as a child. The origins of the monument’s name and their history are shrouded in mystery. Aptly, Adrian Jones is also the rock upon which Nine Stones Close has been built since 2008, starting as a solo studio project with St.Lo and later developing into a band with the excellent albums ‘Traces’ (2010) and ‘One Eye on the Sunrise’ (2012). ‘Leaves’ is their latest album and demonstrates Jones’ ongoing commitment to excellence and progression in his music, alongside significant changes in the band line-up. It is also true to say that like the stone circle Jones also likes to retain some mystery, leaving his music and lyrics open to interpretation by the listener.

Leaves as images or as metaphors are well used devices in poetry and music, possibly symbolizing beauty and growth but also death, change and rebirth – richly coloured Autumnal leaves beautifully carpeting forest floors, giving way to new shoots and leaves in Spring. Perhaps such imagery could be applied to Nine Stones Close as they release their new album this spring. They blossomed previously to great effect on ‘Traces’ and ‘One Eye on the Sunrise’, particularly helped by the remarkable keyboard skills of Brendan Eyre and captivating vocals of Marc Atkinson (both of Riversea, whom have their own album out later this year). Eyre and Atkinson have now left the band amicably to concentrate on their own projects to be replaced by keyboardist Christian Bruin (of Sky Architect) and Adrian ‘Aio’ O’Shaughnessy on vocals. Previous fans of Nine Stones Close may need some time to adjust to the new direction of the band. Jones is clear that he never stands still musically. He has stated : ‘The three previous albums are all very different from each other. The new singer is an element of that new sound…’. Nevertheless, it is fair to say fans of Atkinson’s voice may need to adjust to the different style of Adrian O’Shaughnessy. This reviewer did need some time to put aside his love of Atkinson’s voice and appreciate how Aio’s very different voice really suited the new music being produced by Nine Stones Close. Such an open minded approach is richly rewarded as the musical vistas and darker lyrical landscapes conjured up on this album open up fascinatingly with Aio’s versatile and powerful voice illustrating the different texture and feel of the music perfectly.

Relatively short song Complicated opens the album with a shimmering keyboard theme giving way to a sinister beat and menacing voice, rising to a throbbing, growling guitar, underpinned by Peter Groen’s dextrous bass. Those unprepared for the change in Nine Stones Close will certainly be saying ‘We’re not in Kansas anymore, Toto!’ Nevertheless, dear listener, stay on board because the ride will get much stranger and darker yet, with a set of characteristically extended songs in which Adrian Jones and band takes you on a psychedelic journey, starting with the very peculiar but enthralling Goldfish. Jones ambiguously describes Goldfish as: ‘hopefully some might think it is about a new world sociopath and others might think it is about …. something else …’. Bruin’s keys float us into this strange odyssey  and we hear a much more subtle side of Aio’s vocals as he intones ‘Conscience has died’. Interestingly, Jones bravely holds the musical tension with restraint. Aio plaintively sings ‘Welcome to my Life’ before Jones’ guitar soars to a crescendo before the piece recedes into a bleak, desolate drone. What’s it about? I have some sort of sense of it, but I honestly don’t really know – but it’s intriguing stuff, and I don’t really care that I don’t fully understand it – that’s half the fascination! Adrian Jones has said of Lie, the next song on the album, ‘that’s a bit of a beast and my personal favourite’, which is understandable as it is an outstanding piece, opening with swaggering instrumental menace. Aio’s versatile vocal swings between sinister but quiet, over a section of chopped chunky riffs reminiscent of Porcupine Tree, to powerful full throated rock howling. Then from left field Adrian Jones throws in a dissonant guitar section, presumably indicating the dislocating and undermining effect of mendacity (Lies), which is one of the underlying themes of the album. The momentum increases as guitars spiral around the central crunching drums and bass, with Bruin interweaving subtle keyboards. This fascinating and unpredictable song develops further as violinist, Annelise Rijk, and cello player, Ruben van Kruistrum, in multiple parts build and build the intensity with Adrian Jones guitars stratospherically swooping around the central theme. For fans who liked the remarkable  and epic Frozen Moment on the previous album ‘One Eye on the Sunrise’  will find this familiar but more sinister territory, musically. This was the song which reassured this reviewer that, whilst Nine Stones Close have changed, they have not lost that quality to create rich musical landscapes suffused with a sense of the dramatic and psychedelic.

To underline that point Spoils opens with subtle understated menace with Aio practically purring the vocals before the song erupts and then settles in to ‘Kashmir’ like progression as Aio roars in Robert Plant-esque power, although this band are no Zeppelin copyists! Once again, Nine Stones Close take an unexpected turn as this piece drifts away in to a dream like interlude as Aio sings ‘I’m living a Dream’ with acoustic guitar and then subtle electric guitar playing over an atmospheric and eerie keyboard backing. This bewildering but captivating song then erupts again before once again descending into another dream-like fugue – ‘The Dream I’m Living’ floats over the music, and then the whole band really lets loose with a volcanic finale in which Pieter Van Hoorn particularly shines with some explosive drumming. Part dream, part nightmare Spoils is a remarkable song which has grown and grown on this reviewer – repeated listens gradually unpeel the layers of this song, like all the best progressive pieces. Titles track Leaves concludes the album and, once again, Nine Stones Close take a left turn. Having adjusted to the more powerful direction of much of this album the listener is then confronted with with a largely very restrained, subtle and eerie song which seems tailor made for Aio’s versatile voice. Van Hoorn shows that drumming is not all about pounding away as his imaginative percussive touches play around the theme and vocals. Jones conjures unnerving and weird sounds from his guitar to punctuate this unsettling landscape, before introducing some Floyd like sweeping guitar lines with Aio crying ‘Have you ever lived your life, Have you ever really lived your life?’ as the song builds in impressive intensity. However, just when you think Nine Stones are going for the possibly clichéd barnstorming finale they fade into a wistful ending with Bruin’s piano beautifully and elegaically bringing us to the end of this journey. Whilst this is not a concept album Adrian Jones has described ‘Leaves’ as  having a theme  of ‘what we are doing to the world we live in and to ourselves’. That definitely comes over in the final track of this very fine album.

Progressive music fans can be remarkably conservative at times, which does sound contradictory to the concept of progression. Bruce Soord of The Pineapple Thief once said words to the effect that he expects to lose old fans with every album because some find it difficult accepting that he is progressing in his music, but that with every new album he gains new fans who appreciate his new direction. That is inevitable for any band like Nine Stones Close who do not stick to their old formula and want to progress. My advice is stick with these guys because you are never quite sure in which direction their songs or this albums may turn, but it sure is an imaginative and fascinating ride!