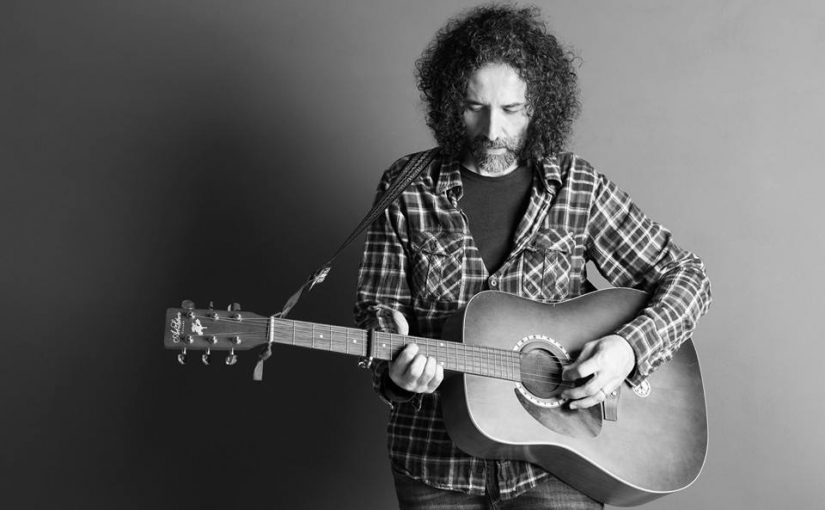 I suppose you could call it being a music nerd but I am sure many of my fellow music fans also have this innate ability, identifying musicians by their signature sound and, for the purposes of this review, it is particularly applicable to guitar players.

Be it the great blues players like B.B. King, Stevie Ray Vaughan, Buddy Guy or, latterly, Kenny Wayne Shepherd and Joe Bonamassa, the stellar guitarists of rock music, Eric Clapton, Eddie Van Halen, Pete Townsend and Yngwie Malmsteen or progressive rock’s great exponents along the lines of David Gilmour, Steve Howe, JohnPetrucci, Alex Lifeson, Steve Hackett and the sadly departed Piotr Grudziński, they all brought a unique guitar sound to the music, one that most aficionados could instantly recognise.

This would add something different to the music, something to make it stand out from the sea of music that lapped around our metaphorical ankles and give you a reason to listen to, and purchase, it ahead of anything else. It also made it feel more personal, less generic, and gave you, the listener, a particular attachment to, and fondness for, that music.

Well, I’d like to add one more fantastic guitar player to that list, the incomparable Italian maestro Marco Ragni who also happens to have just released his latest solo album ‘Land Of Blue Echoes’. Marco has been making music since the age of 17 when, in 1987, he released ‘Kaleido’ but it was his last album, ‘Mother From The Sun’ (released in 2014), that introduced me to this seminal guitar player. Influences including pysychedelic, folk, funk and pop abound throughout his singular brand of progressive rock and his playing is absolutely exemplary.

He says of his new album:

“I play and write songs to free myself from the constraints of life and to emphasize all the beauty that surrounds me. I’ve never done caged by drawings and I never wanted to replicate a sound or feel. I’ve always tried to rework all my putting influences what I have in my head, not as a musician, but as a person. I always imagined me like a volcano full of a thousand artistic references ready to erupts new reworking songs that I have heard, mostly using my sensitivity. I hope you can hear a “Marco Ragni” sound and not something that looks like a nostalgic operation.”

‘Land Of Blue Echoes’ is an ambitious work, in the name of prog-rock dropped from atmospheres and canonical issues, characterized instead by a crossroads influences ranging from psychedelia to the new international rock, through to Marco’s beloved Pink Floyd. For ‘Land Of Blue Echoes’, Marco Ragni has brought together a band of illustrious collaborators including Durga McBroom (backing vocalist for Pink Floyd and David Gilmour since 1987). The first thing that struck me about the album was the striking cover. Now those of you who have followed my writing over the last 3 or 4 years will know that album art is something that I really appreciate and can almost make or break a release for me. The cover to ‘Land Of Blue Echoes’ does everything right, simple yet compelling, it draws your eyes to the artwork like every great cover should. Now, onto the music….

Between Moon and Earth opens with a 60’s feel NASA voice over before a psychedelic off centre guitar note, courtesy of Colin Tench, starts the track proper. Insistent drums and bass add a slightly disconcerting note before the guitars play against each other with a slightly alien feel, it’s stylish and intriguing and that almost corrosive guitar that meanders though your mind is quite addictive. Quite a thought provoking instrumental start to the album. One of the two extended ‘epics’ on this release, Horizons begins with a delicate introduction that seems to tingle across all your synapses before opening up into a proper 70’s feeling progressive track with its complicated music and eerie flute like sound. It then picks up pace and turns into something that Public Service Broadcasting would have been proud to release. A distinctive sci-fi note runs though the music before the keyboards, drum and bass go all funky on you backing a slightly distanced voice over. It never gives you chance to settle and leaves you feeling as if your in the middle of an episode of Space:1999 with its retro feel. Marco is an expert at using music as a storytelling medium and he does it again here as his vocals open up, laid back and full of character. The music takes on a slightly medieval edge with the sound of a harpsichord and you just go along with the very impressive flow as it explores different avenues. A slightly disconcerting guitar solo adds an abrasive note but takes nothing away from the narrative. It’s a track that becomes quite obsessive as you follow its ever impressive journey through darkness and light, the elegant piano section preceding a guitar solo of incredible depth and scope and where the Hammond organ is given free rein to provide an admirable backdrop, music that just keeps on giving. A persistent piano note and flamenco guitar open title track Land Of Blue Echoes with a grave and serious tone which continues with the vocals, Marco delivering the words in a deliberate and thoughtful manner. Another spiky guitar run adds more feeling of discord that contrasts against the lighter Spanish influenced guitar to leave you feeling slightly disorientated, if only in a good way. Who said Pink Floyd? Money Doesn’t Think begins with a stylish bass, drum and keyboard rhythm over which Fernando Perdomo’s guitar overlays a seriously impressive auditory exhibition. The vocals add a touch of gravitas with their earnest intonation but it is the rather catchy music that stands out here, the guitar playing just blows you away with its power, skill and dexterity and are backed up to the hilt by the notable rhythm section. This is one of those songs where you keep finding yourself pressing repeat. That medieval feel, with touch of eastern promise, returns on Canto D’Amore, Marco delivers a delightful vocal and bouzuki performance and the harmonised sections send shivers down your spine with their eclesiastical feel. A pared back innovative delight of a song that just cleanses your palate mid way through this intense album. Deep Night is a fantastic song whichever way you look at it but the addition of Durga McBroom’s distinctive and haunting vocals is the true highlight. A track that will leave you rapt, almost in limbo, as you let its many charms wash over you. She has a voice that expands to fill any room she may be occupying and, as well as being dynamic and potent, there is a subtlety to it as well. The music plays an admirable second fiddle here but is no less dramatic or imposing as the compelling guitar adds the finishing touches to a near perfect piece of musical theatre. Beltane, to me, seems to be a song of two parts. The opening part is all complex and convoluted progressive rock where the gentle acoustic guitar, drums and casual bass leave you in some sort of fantasy world where Marco is the tour guide and his languid vocals just wash over you leaving you feeling slightly becalmed. The Hammond organ in the background gives an insistent edge that seems to be trying to wake you from your musical stupor. There’s a guitar part that seems slightly out of phase and focus, leaving you feeling a little spaced-out, fazed and nonplussed. Then, after a little calming interlude, it brings itself sharply back into focus as the guitar drives the song forward in a more traditional fashion, aided and abetted by the elegant rhythm section. The first couple of times you just don’t ‘get’ it but then it all falls into place with a knowing nod from the music. Intelligent and thought provoking music that requires some work from the listener too. Now onto the second, and longest, ‘epic’ on the album. Nucleus Parts 1-8 really does deserve that title, not only for its length (coming in at just under 23 minutes) but, also, for its inventive and involving composition. It even feels like an epic as it begins, a searching guitar fading in and laying the foundations, backed by the bass, an ominous undertone. Then a fiery guitar breaks from the fold demanding your attention as it drives the song on with a reverberating and chiming tone. Then, calmness, Durga’s distinctive vocal warblings, earnest and sincere and yet with a mournful edge to them, hold you spellbound as the musical convolutions conspire in the background. It is hypnotic and almost surreal, like the musical equivalent of a Hunter S. Thompson novel, ‘Fear and Loathing in The Land of Blue Echoes’ perhaps? The guitar then breaks free to deliver a fast flowing section of intricate brilliance that precedes Marco’s grave and determined vocals, backed by the haunting tones of Durga. These vocal interludes are punctuated by flashes of six string brilliance that just blow you away. A seamless move into a period of calm reflection then follows, gentle guitar, expressive bass and smooth drums hold in a their reflective embrace, Marco and Durga’s vocals, serene and tranquil, have a hypnotic grace and you relax and let the music flow over you. An embellished, slightly tortuous guitar then takes over, searching and asking questions of you before Durga’s vocal wanderings invite you on a journey of discovery. I said before that Marco was a musical storyteller and he reaches a pinnacle on this elaborately momentous, ambitious and complex musical tapestry. You can just lose yourself in the soundscape and enjoy every nuance and minutae of its melodic charm as each individual section delivers its singular tuneful aesthetics. This remarkable musical odyssey comes to a close with the blues-tinged Queen of Blue Fires, a wistful and nostalgic track enhanced by the addition of Hamlet ‘Transport Aerian’ on bass guitar. It begins with slightly somber feel to the music and vocals, almost like an emotional lament. The guitar then fills you with a feeling of hope as it seems to lift the cloud from over everything. Perhaps the end of one thing that should be mourned but also the beginning of something new that needs to be celebrated. Heartfelt and profoundly sincere, it seems to resonate with your very core and invites you on this new and uplifting journey where we can look at things that have passed with fond affection rather than a sense of grief. The Hammond solo is a thing of genius that just makes me smile and tip my metaphorical hat in acknowledgement and it is matched in sincerity and intensity by the burning guitar solo. A fitting end to a magical musical excursion.

Marco says that this is an international album and it should appeal to all nations with its intense brilliance. A deeply moving listen which shows Marco Ragni at the height of his power, it left me feeling free and unencumbered by the worries of life. This is not mere music, it is a life changing experience and is surely one of the highlights of 2016 so far from a musician who just gets better and better with every release and one who is backed by a stellar group of contemporaries.

Buy ‘Land of Blue Echoes’ from the MRR bandcamp page