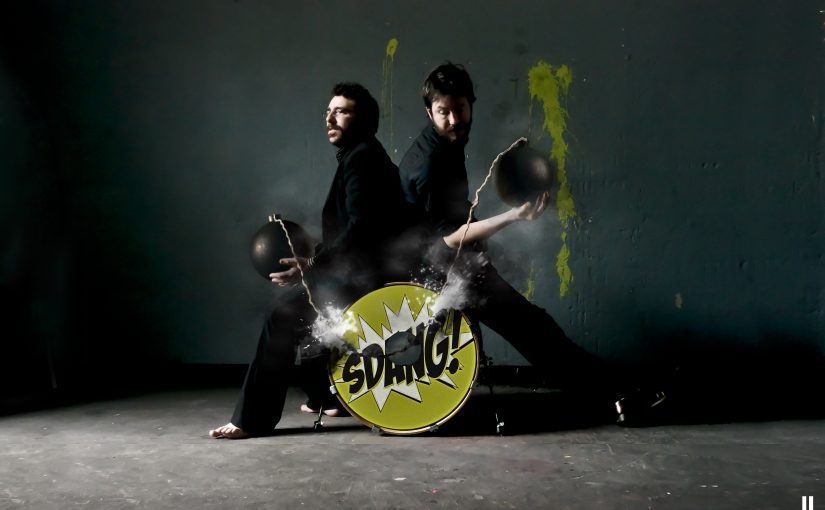 “If we spoke a different language, we would perceive a somewhat different world.”

Music, we think, transcends mere language. A song sung in a tongue not our own can still mean as much whether you understand the words or not, in fact it can add something to the enjoyment due to the mystery of its meaning.

However, when it comes to instrumental music, it is all written in the same language….or is it?

I’m not saying that I’m a complete expert but I do like  a lot of instrumental music and, to my ears, you can sometimes tell where the artists call home. Maybe it’s just a knack or maybe there is something to be said for each country or region having its own signature iconic sound?

Well, as soon as I heard the first notes of SDANG!’s second release (and first full-length offering) ‘La malinconia delle fate’ I had this high energy duo pegged as Italian and found that I was subsequently, correct in my assumption. What gave the game away? The irrepressible, slightly madcap and frenetic playing by these two accomplished musicians resonated with me in a way I had felt before, usually when delivered by Italian musicians.

‘La malinconia delle fate’ is a record full of dreamy atmospheres, explosive dynamics and a concentrated energy that defies easy classification. It is a happy island of memories and hopes and of things getting hectic and yet, is full of sentimental complicity.

Nicola Panteghini (guitars) and Alessandro Pedretti (drums) are musicians who were involved in the national music scene for a long time. Sharing many thoughts and a common love of music, they have returned to the musical background of their youth: grunge, heavy metal, stoner rock, prog, post rock and math rock.

Working on their own original compositions, they released the debut EP ‘Il giorno delle altalene’ in April 2014 and, from October 2015, have been working with Marco Franzoni (Bluefemme Studio) on the much anticipated follow up.

It is not a question of gender, label, fashion or style, it is a matter of sensations, feelings and emotions. SDANG! want to tell stories through their music. ‘La malinconia delle fate’ is thirty-six minutes of intense instrumental music that demands your attention throughout. The extended soundscape that these musicians create is quite remarkable considering that there are only two of them.

Delving into the six tracks, opener Primo Giorno Di Scuola has a subdued opening, lulling you into a false sense of security before the atmosphere builds and then these two musicians create a cacophonic wall of noise that just blows you backwards. Edgy, funky and full of angst, you ride along on wave of chaotic good humour, not caring where you will end up next. Alessandro’s drumming has an intensity that almost gives it a life of its own and Nicola seems to be able to sound like a whole band or one calming influence, seemingly at will. Full of laid back lulls and energetic turbulent highs, it is a instrumental thrill ride of immense proportions. Get your breath back and have a rest for a while as the elegant opening tones of Martina take over the narrative in your mind. Once again, these stylish refrains are brutally cast aside by the interjections of a monstrous wall of sound created by the crushing riffs of Nicola’s guitar and the colossal drum beat that Alessandro creates. The lovely, peaceful sections have a wistful note to them, calm and collected, a complete juxtapose to the deranged power that this duo can unleash and it is an addictive interplay.

Stevie Ray Vaughan met Eddie Van Halen and they recruited John Bonham on the kit, that’s the immediate thought that goes through my mind at the start of Astronomica with its 70’s blues-infused riffing and thunderous drumming. A real wild musical ride of prodigious proportions that is brought bang up to date by the spaced out, psychedelic interludes that are dropped in throughout. A real mind-bending track that takes you up some blind alleys before laughing in your face and buggering off to leave you utterly bemused at your predicament. Scrivimi Una Lettera Tra 9 Anni begins with low key staccato riff, edgy, tense and nervous that leaves you on the edge of your seat. It then opens up into a real bluesy early Led Zeppelin influenced piece of music where the booming guitars and thunderous drums create a massive musical mosaic before seamlessly transforming into something that could have come from the mind of Steve Vai or Joe Satriani. A musical journey through differing sonic landscapes with edgy riffs, extended guitar runs and frenetic drumming that takes no prisoners yet offers a deeply involving musical experience.

Buckle up, it’s time to put the pedal to the metal. To my ears, 100 Metri Al Traguardo is a shameless homage to the guitar greats. Vai and Satriani would be happily tapping their feet to the hard rock riffs while simultaneously reaching for the copyright infringement rule book. I jest really, this is a fun filled, no holds barred jaunt that powers along at a fair lick. There is a segue into a sombre, unhurried section that seems to be slightly at odds with the convivial feel of before but it eventually comes together in your mind and makes for a rather impressive track as it plays out. So we come to the close of the album and all too soon a ending it is too. The final, and title, track La Malinconia Delle Fate begins in an unhurried, pensive manner before someone lights the blue touch paper and Nicola’s guitar signals the off with a hard-edged and repetitive riff, ably backed by the blur of Alessandro’s drum sticks as they thrash the skins. There is a skittish, agitated feel to the music, interrupted by the occasional calm moments of candour and clarity. Its is the forceful and dynamic parts of the song that really grab you and demand your compliance that stand out for me though. A driving force of nature that brooks no argument and lays waste to all before it before its inexorable advance. As this compelling piece of music comes to a close it is the imposing power of this commanding duo that is left burnt into your psyche.

An aurally stimulating release that will impress all who hear it, ‘La malinconia delle fate’ is stimulating, thought provoking and, well, just damn good fun. You will struggle to hear a better thirty-six minutes of purely instrumental music this year.