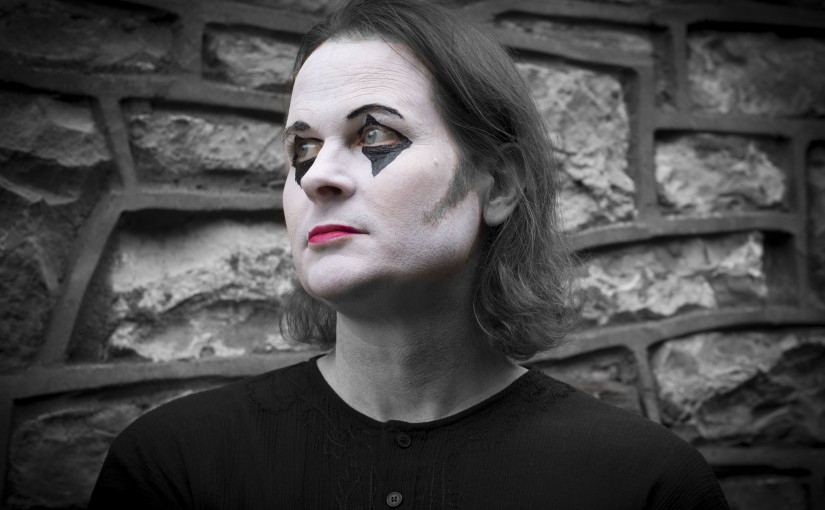 This review is dedicated to Jean Trimming R.I.P Matthew Parmenter, the charismatic front man of Discipline, has released his impressive third solo album, imbued with emotion and narrative skill. This album marks his first release with Bad Elephant Music, following on from their ‘fire alarm meeting’ outside the Summer’s End Festival in 2015. The dramatic impact of Parmenter’s stunning show with Discipline at that event led to a great social media comment that the most memorable sound of the whole weekend was the sound of so many jaws hitting the floor in amazement at his performance. However, this solo album shows a very different side of Matthew Parmenter. Scheherazade was the wife in ‘One Thousand and One Night’s’ who had to tell stories that would keep her husband on tenterhooks until the next night instead of executing her. It is appropriate that Parmenter opens the album with a fascinating song about this story teller, ‘weaving stories into stories’, grabbing one’s attention immediately with a high alto voice intro, akin to Antony Heggarty. Parmenter is filled with stories and poetry which he pours into this work. For the title track he uses probably one of the most famous soliloquies from the greatest story teller of them all, Shakespeare, drawn from Macbeth Act 5, scene 5:

‘… And all our Yesterdays have lighted fools the way to dusty death, out, out brief candle’

Some may question the wisdom of tackling the Bard in this way but Parmenter has the poise and skill to capture the despair of this speech without overpowering it, and his voice is perfectly suited to conveying the presence of a Shakespearean tragic hero. Much of this work is pervaded with a sense of melancholy, particularly in the finale Hey for the Dance and, particularly, I am a Shadow, which perfectly frames Parmenter’s voice as a finely crafted instrument in itself, conveying Bowie-esque delicate agony. Favourable comparisons with Peter Hammill of Van Der Graaf Generator are inevitable, and this seems most clear in the vocal stylings and lyrical approach taken on Hey for the Dance and All for Nothing, accompanied with an appropriately bleak violin and organ. It is no coincidence that All Our Yesterdays with it’s the Shakespearean themes follows – we are clearly  walking in the ominous presence of tragic heroes.

However, Parmenter shows he has a lighter almost jaunty side as Stuff in the Bag rolls along in fine style, ‘taking a holiday from consciousness’, reminiscent of the jaunty asides from King Lear’s Fool. This is not an album full of all pervading darkness as Parmenter’s punctuates the album with moments of relief, such as the short delightful instrumental Danse du Ventre, moving in to the fine song of conflict feelings evoked in Digital. Previously in reviews I have tried to be ‘objective’, but that is all an illusion as ALL reviews are subjective, filtered through all of our individual thoughts, feelings and experiences. Some records will mean more for different reasons, and the feelings conveyed may affect us in unexpected ways. Similarly, the actions of the artist may impact upon us. With that in mind, the song, Inside, really connected with me, and I know that one small unheralded action by this artist had a positive effect upon me at a difficult time, which I think says a lot about him as a person as well as an artist. Please forgive the personal angle at this point but this is essential for me to convey the meaning of this song and album to me. After seeing Discipline in October at Summers End 2015 I bought 2 Discipline albums at the festival. Later I found that a CD booklet was missing, and unfortunately the vendor could not help as they had sold out. I forgot about this for a while as other things of more importance were happening in my life. In December sadly my Mother passed away quite suddenly, which devastated me. In my grief I looked for slight distractions and recalled the missing CD booklet. I decided to e-mail the record company in America to explain the omission, and to my surprise I got a very swift reply back directly from Matthew Parmenter, promising to send the missing booklet. I replied that I was impressed with his speedy and helpful reply, remarking in passing that it was nice to have such a positive response as my mother had just died. Just after New Year’s Day a package arrived from America and not only was there the missing CD booklet, but also a complimentary copy of a Discipline album! There was no note but so much had been said by that thoughtful and compassionate action. I am also pretty certain Matthew would have had no idea I do occasional reviews – this was a simple moment of generosity, reaching out to someone in sadness.

Fast forward a few weeks to my first listening of Matthew’s new album and I get to hear the wonderful song Inside with the powerful refrain:

“You May Be Lonesome and Uncertain, I may be Feeling I’m Alone, We May Find Comfort in this Moment here – Inside…”

I probably do not need to tell you how that song hit me as I drove along listening to it for the first time. It’s a wonderfully understated song with sensitive vocals and atmospheric organ as the song builds in restrained power and emotion.

Matthew Parmenter has stepped aside from the magnificent, gothic group dynamic of Discipline to create a solo work of art suffused with dramatic shades and emotional lyricism, conveying tragedy and hope. This is an album that is likely to captivate and beguile with subtlety and delicate emotion. It certainly gave me unexpected comfort – Inside.

Buy ‘All Our Yesterdays’, on digital and CD, from Bad Elephant Music

All live photography thanks to Sam Holt.

All other photography, much thanks go to Graham Stead.

This review is dedicated to Jean Trimming R.I.P.