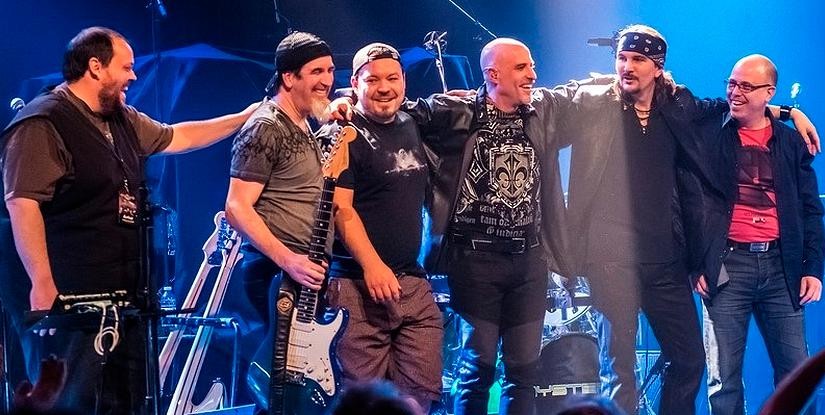 After releasing the excellent ‘One Among the Many’ (2010) and the superlative ‘The World is a Game’ (2012), expectations are rightly high for ‘Delusion Rain’, the fifth studio album from Canadian band Mystery. In the intervening years, ex-Yes front man Benoît David, lead vocalist since 1999, made the difficult decision to step down and take a break from music after touring with the band in 2013 (captured on the wonderful live recording ‘Tales from the Netherlands’). His replacement for this new release, Jean Pageau, first joined the band on tour in 2014 before heading to the studio to work on the new album.

Pageau is an absolutely inspired replacement and instantly brings a voice which is more authoritative, pronounced and assured whilst capable of the same sweeping range and delicate nuanced subtleties. Indeed, it is precisely the sensitive responsiveness of his voice which makes him a perfect fit for the unmistakable Mystery ‘sound’, bringing extra depth and expressiveness whilst also pushing the boundaries further to create the most expansive vocal orchestrations and layered harmonies which swiftly become a trademark feature of this new release.

Pageau’s distinctive infusion seems to bring a new lease of life to band leader Michel St-Père who, supported on guitars by Sylvain Moineau, finds much greater freedom to mirror his vocalist’s assertiveness in providing a strong bedrock of power chords mixed with acoustic cadences whilst at the same time innovating through soaring and melancholic riffs which are as magical and as forceful as they are fleeting.

Yet ‘Delusion Rain’ also brings much more clarity and depth to the musicianship than is apparent in previous releases, due primarily to St-Père’s excellent production. Benoit Dupuis on keyboards is allowed to provide a rich and enhancing atmosphere within which both vocals and guitars are nested, the sound sumptuous, enveloping without ever becoming suffocating. François Fournier on bass is superb and for the very first time we can really hear a dynamism and a bite which supplies an extra and most welcome dimension to the recording. Jean-Sébastien Goyette on drums is a strong and driving heartbeat which pulses throughout each track, keeping things fresh with changing tempos and some lovely teasing cymbal work whilst always ensuring a disciplined and at times dramatic mastery that keeps the band true to the themes and the lyrics. The album also sees contributions from Antoine Michaud (Monochrome Seasons), touring guitarist with the band, and Sylvain Descoteaux (Huis) on piano. Add into the mix Pageau’s ephemeral flute playing on A Song for You (Track 6) and some occasional keyboards as well and you get the sense that ‘Delusion Rain’ marks quite a significant point in the history and development of the band where they finally have the pieces in place to be able to push on and really do full justice to the adventurous musical project that is Mystery.

As such this album excels in two respects. On the one the hand, it consolidates, tightens and defines the signature sound of the band, and does so with style and panache. The first three tracks, Delusion Rain, If You See Her and The Last Glass of Wine are beautifully refined statements of musical intent and it is easy to see these quickly becoming audience favourites on any set-list. The music is rich, lush, sweeping in scope and embracing in the way it engages the listener. There are anthemic choruses and soulful refrains combined with lyrical intensity.

On the other hand, the final three tracks show us the true promise of what Mystery can become. The band have always been at their very best when the focus is on extended song-writing, telling stories through their music and producing the kind of epic ballads which are a wonderful showcase for both their exceptional talents as well as their innovative creativity.

‘One Among the Living’ gave us the fabulous Through Different Eyes, weighing in at a spectacular 20+ minutes and pushing the boundaries of scintillating and adventurous musical creativity. ‘The World is a Game’ gave us Another Day, 19 minutes of complex and hugely enjoyable instrumental invention and inspiration.

‘Delusion Rain’ suddenly comes alive with The Willow Tree (Track 4), 20 minutes of utterly spectacular writing which transports you through changing musical landscapes and shifting emotional horizons to reach creative heights that are wonderful and exhausting. Wall Street King extends this incredible vision, increasing the intensity, adding layers of forcefulness but at around the 4.30 mark releasing it all in staggering waves of glorious guitar work. A Song For You brings the album to a pulsating close, the instrumental work fabulously delivering a rousing and climactic finale which leaves you wanting more and yearning with anticipation for what the next release will hopefully bring.

This album has certainly been well worth the wait. In particular, what Mystery have achieved here is something highly significant: they have simultaneously consolidated and confirmed their excellence in musical skill, virtuosity and lyrical brilliance whilst at the same time pushing much further than in any other previous release the scope and ambition of the band’s musical vision and reach.

‘Delusion Rain’ gives us a tantalising taste of genuinely cutting edge progressive music from a band who are willing to create, innovate and really push the boundaries of what they want to do and where they want to take us as a result. In the process, they may have created a rod for their own backs by setting the bar even higher for the next instalment on this wonderful journey.