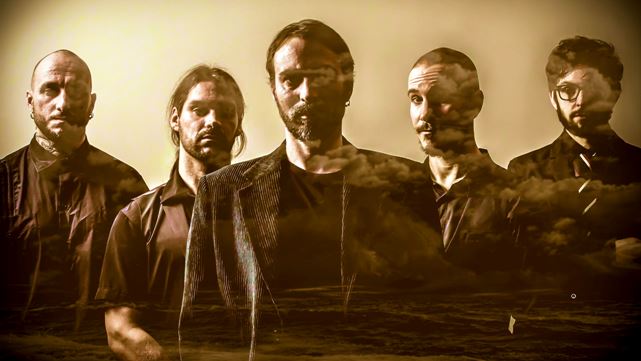 With his first review for Progradar, here’s Mike Sherman… This review is, in part, an homage to the many mixed playlists available on music streaming services, as this is how I discovered this band and this album. I’ll kick things off by saying that it’s one of my favourite LPs of 2015…..

I love discovering a band who are far beyond basic composition, performance and production competencies, yet still maintain a humble presence within the information stratosphere. “Where are Klone from?” I hear you cry. “They’re from Poitiers in France!” I answer…

…and then we get on with talking about the music.

The musical stylings of Klone are ‘a bit of a lot of things, all at once’. There’s some ambience; there’s some melody; some heaviness (dare I use the word “grunge”?!?) and – thank goodness – some tinges of prog. Mix these together, usually at the same time, and we’re not far off.

‘Here Comes The Sun’ harnesses the smooth mid-range vocals of Yann Ligner to create some beautiful pieces, and now 5 LPs and 2 Eps deep into their career, Klone have become a tight band who express themselves as a collective first and foremost. This is important for me, as I infinitely prefer a strong band dynamic to one or two show-offs backed by competent “others”. There is great collective creativity in the composition; the performance, and – as I will repeatedly mention below – the production is nothing short of oh so lovely to these ears.

So, in short, I bet they listen to a lot of Gojira, Tool, Anathema and Porcupine Tree. Not much like the Beatles, despite the obvious reference in the album’s name. The opening track Immersion brings us instant soulful melody with heaps of ambience, in the form of the kind of reverb-heavy multi-tracked lead guitars typically found in post-rock. After the intro, we’re back to the strong opening melody revisited, only this time with a tactful and pleasing use of “welcome, we are the band” drums and heavier guitar. There’s an element of “shoegazing classic” about this track, in that it has a strong melody throughout which is textured nicely with a good balance of the heavy and the ambient. This is all produced to create a finely-balanced sound that doesn’t overpower at any point, nor does it drift away into indulgent territory in its restrained 5 minutes 10 seconds length. Later riffs complement the earlier shenanigans well, and the band sound very much together in completing an interesting and dark-ambient sound. The more subtle brief saxophone burst and vocal textures are allowed to add nuance rather than to take the overall direction away from what is a solid opening track that suggests a lot of promise for the rest of the album.

Next we come to the track that presented me with my first leading impression via the medium of playlist, then. Fog is one of the more progressive numbers, and it invited me in on first listen with its relaxed and smooth 7/8 verses and melodic-but-gently-powerful chorus and slightly heavier second half which hosts some serious groove and the first bit of noticeable drumming flair. Again, there is good cohesiveness to the band, with all parties combining to make a strong whole, rather than any domination of a particular instrument. It’s becoming all really rather pleasant and it’s going to get even better.

Gone Up In Flames is a catchy, almost dance-worthy (?!?!?) alternative-radio-friendly number that grabbed me from the start. Based around four chords, the rhythm guitar can be played alongside with minimum effort by those able to, and should be played in dropped-D like any self-respecting 90s grungehead would. A few nice bits of drumming thrown into the straight-4/4 mix; a solid turn of events for the bridge, and a great half-time groove in the coda. Great stuff.

The Drifter sounds very progressive, more in the vein of Fog than anything else on the album. It’s a bit of a workout for the band in terms of time signatures and textures. The rhythm section really shines, and prog fans will be happy to hear that despite some 4/4, there are plenty of other meters intermittently featured, all very smoothly connected with no jarring whatsoever. It also features two of my favourite things – vocal lines that last just that bit longer than they should probably be allowed to, and lingering guitar lines that won’t quit easily. The production is again very well-executed, and the whole thing flows very well to help what could have been one of the more challenging tracks on the album to sound relaxed and very enjoyable.

The Drifter is perfectly placed in the track order to open the way for Nebulous, which is undoubtedly the (best French accent) pièce de résistance of the album. Melancholy, moody melody with active but tactful drumming and ambient post-rock guitar stylings leading to a powerful and beautiful chorus with a titanic guitar sound that is, once again, very well-controlled in the mix so as not to overshadow the more subtle elements of the sound and the angelic vocal line. Again,there is a smoothness to Klone’s work, and the 7/8 of Nebulous fits it like a glove – no pretentiousness here, it’s just a very strong ambient rock song that completes an utterly superb run of five tracks. I’d argue that this track could probably have made an excellent album-closer. Gleaming acts as a break, and to me represents where the fork in the road lay for Klone as they decided where to take the magnificence and consistency of the first five tracks and round things out. It doesn’t add a lot, but complements what went before, and acts as a distinct half-time break, as such.

The final three tracks take things in a slightly different direction, and one that I was unsure on for quite a while. Indeed, they represent the main reason I was hesitant to review the album until I’d had a good number of listens through the album. I’ve gotten used to it, but it still seems the weaker half of the album by far. The first thing that’s noticeable is that Grim Dance and album-closer The Last Experience have a slower 4/4 groove that gives the impression of something darker in atmosphere than the rest of the album.

Penultimate track Come Undone is probably my favourite of the three, and possesses an excellent intro and a livelier 6/8 swing. The Last Experience develops an increasingly tense atmosphere and ends with satisfyingly heavy riffs that punctuate that, despite this definitely being a “prog-rock” album, this band are also definitely metalheads. The repeating heavy guitar lines and descends with an almighty mess, which I like the symbolism of as it signals that the production team can now take a well-earned rest!

There’s a part of me that feels the first five (possibly six) tracks could have made a world-class EP or short LP, but the final three tracks have grown on me more with each listen, to the extent that my initial reservations have been largely quietened. It’s definitely an album split in two – that much is evident. However, the more I listen the more I find it all has its place.

I’m an album kinda guy first and foremost, but good on playlists for leading me to this discovery. Highly recommended – I hope you enjoy it as much as I do.

About the Author – Mike Sherman A Financial Adviser by day, a board game enthusiast and musician/composer by night. I grew up listening to a combination of Dire Straits and Steeleye Span while playing classical piano since the age of 5. After the “rebellious” stage of life as a grunge/metalhead I’m very much into a heady cocktail of prog-rock, folk and classical these days.