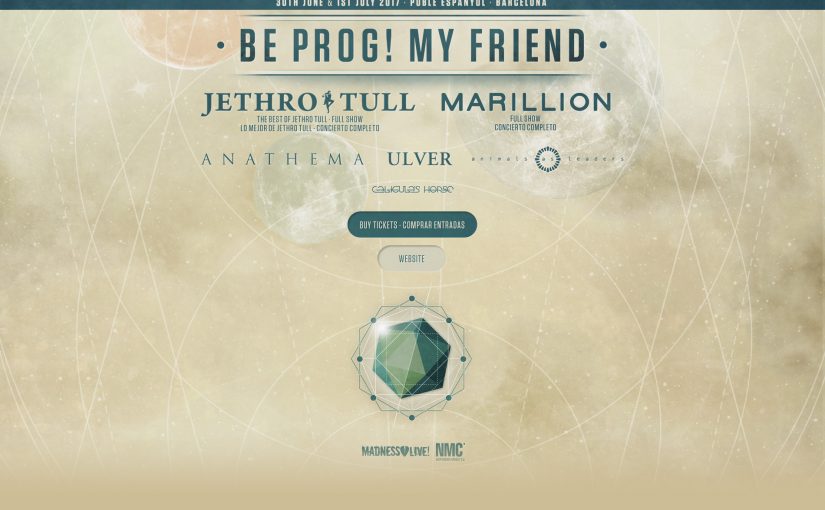 Since its inception in 2014 the Barcelona based festival Be Prog! My Friend has played host to the likes of Steven Wilson, Opeth, Camel, Meshuggah, Anathema, Devin Townsend, Pain Of Salvation, Katatonia, Leprous, TesseracT, The Pineapple Thief, Magma, Between The Buried And Me, Anneke Van Giersbergen, Agent Fresco, Fish, Riverside, Ihsahn, Alcest, Textures, Haken, Iamthemorning, Obsidian Kingdom, The Algorithm & Antimatter.

This year saw the festival co-headlined by Steven Wilson and fellow progressive heavy weights Opeth. So far for 2017 Be Prog! My Friend have announced the legendary Jethro Tull as Saturday’s headliner alongside Norweigian music collective Ulver, Anathema, Animals as Leaders and Caligula’s Horse.

Now the festival have revealed Friday’s headiner for the 2017 edition of Be Prog! My Friend will be Marillion. The festival organisers comment:

‘Marillion’s music is, by its nature, tough to sum-up but perhaps can be described as experimental-yet-emotional rock, married to thought provoking, soulful lyrics – a powerful and moving cocktail which, for those who “get it”, elicits extraordinary devotion.

After over thirty years, the band shows no signs of slowing down; this last month they released “Fear (Fuck Everyone And Run)”; an album that has been called “the best album by Marillion in twenty years”.

Steve Hogarth said, “We don’t know how many more albums we’ll make, or how long we’ll live. Everything has to be the best it can be”.  With ‘FEAR.’ Marillion show that they are as vital and potent as ever. Peerless and, yes, fearless…

We welcome Marillion with our arms wide open!’

Tickets are on sale now with final price. 130 Euros: