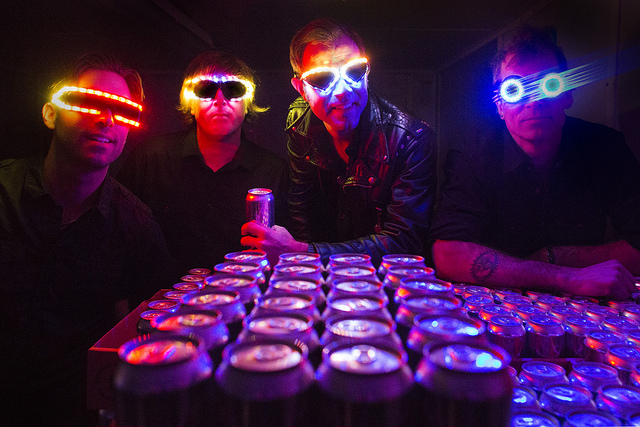 The Lights Out and Aeronaut take a T.R.I.P.

Beer and music have enjoyed a long history together. Now they’re taking the next step in their relationship.

The Lights Out, a music and light project that takes people on a journey through parallel worlds, and Aeronaut Brewing Co. have collaborated to create ‘T.R.I.P.’, a sci-fi album and an adventure beer.

The album explores the idea that our observable universe is one of many — a multiverse — where everything possible exists somewhere. It was inspired by the theory that each of us has infinite reflections of ourselves, living alternate lives. Each song on the album was written as a report back from another reality visited by The Lights Out.

The beer is an Imperial Session IPA – a paradox in a can – representing the full range of possibilities, brought together in a supremely drinkable offering by the intrepid brewers at Aeronaut.

This fall, drinkers who purchase cans of T.R.I.P. beer will find instructions on the label to obtain a copy of the ‘T.R.I.P.’ album, by taking an action on social media. “The beer fuels your trip through the multiverse, and the album is the soundtrack to that journey,” said The Lights Out guitarist Adam Ritchie. “Aeronaut embraced the spirit of this album from the start, and was the perfect co-pilot to help us bring T.R.I.P. into this reality.”

“We designed this beer to pair with the album,” said Aeronaut CEO Ben Holmes. “It’s packed with galaxy hops, clocks in at 7.5% ABV and is refreshing to drink,” he said.

The beer’s artwork was created by Raul Gonzalez, and features the pandimensional pilot character from The Lights Out, and the band’s Color Machine – the vehicle that takes them between dimensions – flying through a wormhole. “A fragmented and highly-competitive media landscape means bands need to come up with new ways to release material,” said Ulf Oesterle, chair of the Department of Music and Entertainment Industries at Syracuse University. “Most beer and brewery collaborations are with legacy acts like AC/DC, Kiss, Iron Maiden and Queen,” he said. “None of them have used beer as a format to release a studio album. The Lights Out is venturing into new territory.”

Invention and performance are main ingredients of both The Lights Out and Aeronaut. For live performances of ‘T.R.I.P.’, The Lights Out pioneered a wearable light show, synchronized with the music, and Aeronaut is earning a reputation for its live music showcases as much as for its experimental brewing. It’s been a big year for both The Lights Out and Aeronaut. In addition to completing work on ‘T.R.I.P.’, The Lights Out opened for Andrew W.K. and members of Dream Theater, King’s X and the Dixie Dregs. Aeronaut organized a popular summer music series and won its first gold medal at the Great American Beer Festival.

The Lights Out blends genres and technology to reinvent the experience of seeing a live band. For music, tour dates and news, visit http://thelightsout.com. Aeronaut is a craft brewery and foods hub under one roof. Its inspired team of brewers and scientists collaborates with farmers and food makers to drive the invention of craft beers and spur a renaissance of local victuals and industrial revitalization. To see where Aeronaut is carried, visit the beer finder at http://aeronautbrewing.com.