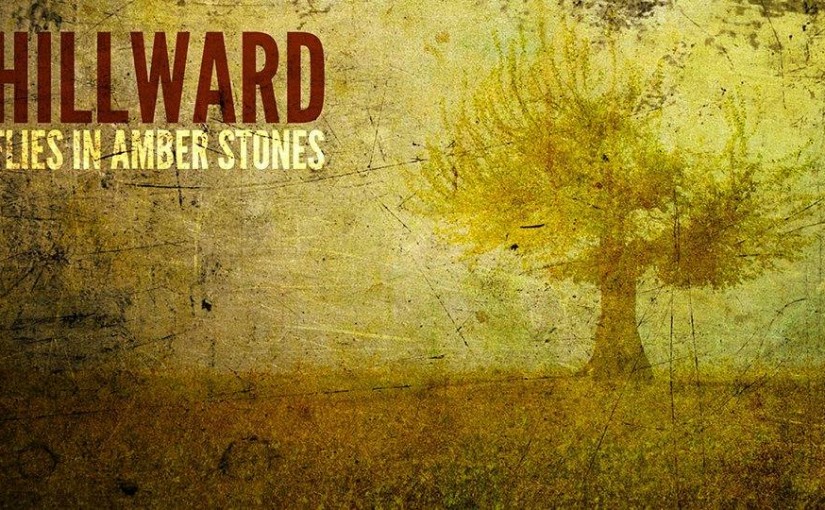 This Canadian trio (David Lizotte on guitars and vocals, Jean-François Boudreault on Bass and Antoine Guertin on drums) started life as a side project of Québecois progressive power metallers Southern Cross (no, me neither). ‘Flies Trapped in Amber Stones’ is their debut album.

Right from the crunching guitar chords that kick in near the start of the opening (title) track you know you’re listening to a band that can play their instruments more than competently, and who work together tightly. The sound is guitar driven, but the core sound is supplemented by keyboards at just the right moments to provide a richer sound palette. The short guitar solo in the second track, Alive, is placed just where you want it, and it doesn’t outstay its welcome.

So why am I not in raptures about this album? I think it may be that, in pursuit of the technical and musical competence that Hillward bring to their music, they have forgotten, or perhaps simply suppressed, their hearts and souls. The third track, One Goodbye is a quieter, more contemplative track, but it is so, so predictable. From the first listen I felt I could predict every move it made, and six or seven spins later it hasn’t yielded up any more depth or richness.

As song follows song, you realise that the band are ploughing a narrow musical furrow. Lizotte’s voice is clear and in tune, but has limited range, both in terms of octaves and emotions. I’m not sure what I should be feeling as I listen to The Missing Link, but I don’t think that the band’s intention was that I should feel that I’d heard this all already on this album, and was likely to hear it again in a few songs time.

And then there are the lyrics. The fifth track Entropy is absolved from criticism on this point, as it is a two minute instrumental which feels like some riffage that coudn’t be fitted into a proper song, but, elsewhere the lyrics are somewhat uninspiring; the songs don’t come across as being about anything important.

The longest song on the album, When it All Comes True (all six and a half minutes of it) might as well be The Missing Link or Alive all over again, here Lizotte asks “does life mean more than words do, silly words learned and repeated too? Does tragedy mean more than poetry?” Then, in Quiescence, another slower, moodier track he asks “what if we never cross the line, what if we never grow old on time, what is love if it keeps us apart?” The short instrumental that follows, Quantify the Abstract, does little to answer any of these questions, but I’m not sure that I ever cared.

Perhaps I am sounding too negative here. I certainly don’t dislike this album, and the penultimate track, Walls of Apathy, is really rather good, at least in part because it introduces another voice, that of Melanie Gagné from fellow Québecois band, Muted Screams. Gagné adds the layers of emotion and aural variety that have been lacking in the earlier tracks.

Yet Hillward are playing in the same musical territory as, say, Haken and Anekdoten, and not far from Riverside. ‘Flies in Amber Stones’, for all its undoubted strengths, offers me no reason to listen to it rather than ‘The Mountain’ or ‘Until All The Ghosts Are Gone’.

The album closes strongly with The End of Logic, and perhaps there is some good advice in the title. ‘Flies in Amber Stones’ sounds just too much as if it had been written to a formula. Hillward are technically excellent. Perhaps they just need to throw off the creative shackles they appear to be labouring under and find some ideas and emotions to invest in their song-writing and playing.

It’s not as if there isn’t precedent here. I can think of at least one other Canadian trio who followed a competent but routine debut with more than forty years of greatness…….

About the Author – Stephen Bowden By day Stephen toils at the bureaucratic coalface, fashioning red tape into enabling and empowering frameworks of policy and compliance. At night he sleeps fitfully, dreaming of weasels and the Forest of Broceliande.