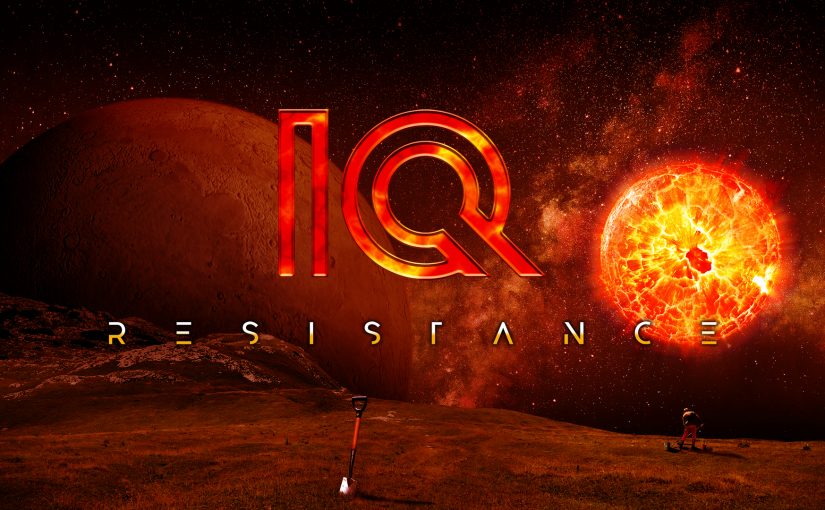 We live in contentious and dark times so maybe it’s not surprising that IQ’s latest album ‘Resistance’ has a real sense of titanic struggles, whether they are internal conflicts or global issues, as the band create a tidal wave of dense and dramatic music. If you thought 2014’s brilliant ‘The Road of Bones’ was dark then prepare yourself for the stygian shades that colour this epic double album. IQ have not held back in this release immersing themselves deeply in to gothic depths with intense and yet captivating music.

‘A Missile’ plunges us almost literally right in to the album as a descending drone and falling electronic pulse thrusts us in to a thunderous maelstrom of drums, bass and keyboards – it just sounds absolutely MASSIVE! Pete Nicholls sings powerfully, riding this ballistic Missile of a song with great skill and feeling – this feels like someone expelling their soul in to the void:

‘What I thought could save me was artificial, Raking across my nerves and taking possession…

…There is no Faith can be sustained,

No Original Sin to blame, Now I know…’

Neil Durant spices up the keyboards with weird, distorted synths. Paul Cook is simply outstanding on drums as he drives this absolute panzer of a song onwards.

What Peter Nicholls sings about exactly is always open to interpretation, but he has a tremendous ability to evoke images and feelings through poetic words and obscure phrases – you don’t know exactly but you can certainly draw a sense of the emotions that inspired his lyrics. When you listen to IQ each time a whole new line or phrase can just jump out and hit a nerve in ways you had not noticed the last time you listened. Such a thought also brings me to a conclusion I have drawn about IQ albums.

For this review I had to put up some ‘Resistance’ (yeah, I know, corny) to the Progradar editor who was gently suggesting I should try to complete the review in a few days prior to the album launch gig on September 7th. A listener needs to ‘live’ with an IQ album for a little while, and then they usually reveal their hidden gems. Some of my most favourite IQ songs and albums have not always ‘clicked’ with me initially, but with a little time I ‘get’ it and I appreciate the quality and depth of the material.

That has been the case with ‘Resistance’ for me, and it was well worth immersing myself in the album. The interlinked songs ‘Rise’ and ‘Stay Down’ did not hit me immediately but now I feel awed by their skilful blending of light and dark, Rise commencing with loud foreboding chords like some sort of epic sci-fi landscape, as depicted on the striking and rather beautiful cover by Tony Lythgoe. ‘Rise’ segues in to ‘Stay Down’ which echoes the previous throbbing chords and melody of ‘Rise’ with a simple piano line under Nicholls’ sorrowful voice.  Pizzicato keyboard notes and cello sounds carry the song on gently but the tension rises with guitar and the sound of ticking clocks. This remarkable song then almost literally falls off a cliff with a massive landslide of keyboards, bass, drums and guitars as Nicholls appears to rail against a breakdown:

If I don’t make success out of real life,  Nothing doing

Fall Back, break out, inside, can’t see, can drown

Shut up while I stay down, The less I can handle

The more I can blame on my breakdown

This is dark and very powerful stuff both musically and lyrically, and one has to wonder what Pete Nicholls and Mike Holmes were feeling when they wrote this album. It feels like this release may have been a cathartic expulsion of emotions.

‘Shallow Bay’ is a more straightforward rock piece with an elegiac feel and gives Michael Holmes a perfect showcase for a fluid, emotive guitar solo over a titanic organ for the conclusion. The intensity decreases significantly for the beautiful ‘If Anything’, demonstrating that IQ know that darkness needs to be contrasted with light and hope. With an opening slightly reminiscent of a song by The Cars, Nicholls’ warm vocals lays out lovely images over delicately picked Spanish guitar:

‘Not anyone could take my Heart, And send it soaring so high,

Tim Esau’s deftly played gentle bass and Paul Cook’s subtle drums and percussion perfectly underpin this gentle piece, demonstrating that it’s not all about power. However, just when we’re settling down in to a soft blanket of a song an ominous drone echoing The Beatles ‘A Day in the Life’ presages the clanging chords heard previously in ‘Rise’ and a Hammer Horror like organ from Neil Durant segues us in to the weird carnival sounds of the  outstanding epic ‘For Another Lifetime’. This peculiar opening evokes the feel of a Ghost Story, especially as the opening sequence eerily slows down and the vocals become distorted and then a classic IQ passage of guitars, drums, bass and keyboards, reminiscent of ‘Sacred Song’ from 2004’s ‘Dark Matter’, builds the tension ominously. This tension breaks with the sound of thunder and a wave of sound breaks over us like a storm breaking – it’s just bloody exciting and stirring stuff! I love IQ moments like this when they really let loose with keyboards and guitars intertwining perfectly whilst ‘Cookie’ and Tim Esau drive the Leviathan on powerfully. Nicholls seems to be screaming in to a Hurricane;

‘And if there’s no Resistance, What am I Fighting For?

An unsung renegade evading radar, And if there’s no existence to worship and adore

A lethal chemistry invades, as dark as war’

For Another Lifetime is destined to become another much loved IQ classic epic song. No other band does it quite like them. Indeed, this album is unmistakably ‘IQ’ – they have a successful formula and they use it with great skill on this album. Sure they turn up the ‘Darkness’ button way up (and the ‘Mellotron’ effect… possibly a little too much at times?)… but the fundamental sound and feel is IQ all the way. They really do not need to experiment when they sound this good.

The second part of this double album is populated with two epic pieces, ‘The Great Spirit Way’ and ‘Fallout’.  This review will not go into great detail about these pieces – some things the listener needs to explore with a largely blank page. The Great Spirit Way is an intense piece which hardly lets up for it’s whole 20 minute plus duration, and features Neil Durant’s enormous organ sounds in abundance. Michael Holmes has shared that what was largely inspiring his music writing for this album was his feelings about the climate emergency, and the complacency towards this global threat. He suggested that groups like ‘Extinction Rebellion’ were the ‘Resistance’ against this issue, and perhaps Nicholls’ lyrics in this piece echo those concerns (but who knows when it comes to Peter’s words?!):

‘All the misfits in the world sure to change it

Fire and Security is a track that follows the familiar IQ template. It’s fine but not outstanding on the album… it’s difficult to stand out on a disc with two 20 minute epics! However, the other shorter song on disc 2 Perfect Space does succeed in making it’s mark. It is interesting to note in the credits that this is the one song on which it appears Neil Durant took the lead role in writing the music. His keyboard sounds are remarkable on this piece, ranging from a gentle ambient opening to an almost dirty sounding organ which bubbles and spits like lava in an incendiary guitar / organ duel in the middle which returns in the dramatic closing sequence.

The epic Fallout draws this saga to an end… it’s full of light and shade, soft and loud, drama and emotion – it’s a classic piece of IQ imagining, almost impossible to convey in words. The piano does make a welcome longer appearance in this piece – it does feel a little bit like powerful organs and keyboards somewhat dominate at times in this album so a gentle piano is a welcome lightening of mood. But that’s the point – IQ wanted to conjure up atmospheres imbued with gothic darkness with dense soundscapes so they chose instruments more suited to that feel.

1993… 1997… 2000… 2004… 2009… 2014… and now 2019. IQ albums since the 1990’s only appear about every 4 to 5 years. In the world of Progressive Rock music they are truly special events as this is one of the truly great bands of the last 35+ years… does this one match up to that fine heritage? Having ‘lived’ with it a little while I feel that it can honourably take it’s place in their fine canon of music. It’s not perfect – it’s difficult fully sustaining a double album (and perhaps the organ / mellotron sounds can be a little dominant?) , but there’s no weak tracks… and let’s face it even a weak IQ track is better than many band’s best tracks – this is IQ after all – the Crème de la Crème of modern progressive rock.

IQ have produced another fine album of imaginative progressive rock with exemplary musicianship and poetic lyricism – it’s just what they do, and they do it so well. It could be another 4 or 5 years until the next one so immerse yourself in this dense, dark epic world and join the Resistance!