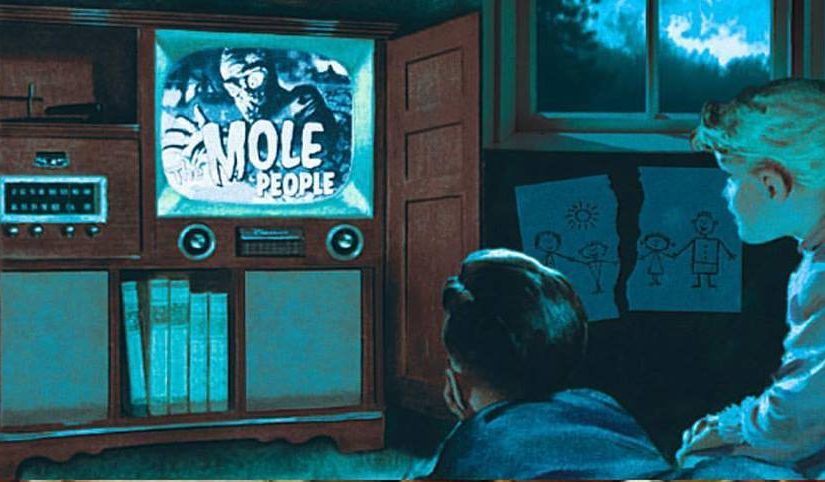 I have often said in the past that I am a sucker for great album cover. Top quality album art can draw you in and make you want to find out what the music is all about. Occasionally it can be a false dawn and the music does not stand up to the stature of the art used to portray it but, thankfully, most of the time it is an accurate facsimile.

When Tony Harn, guitarist with the Prog/Jazz Experimental group Nerve Toy Trio, first showed the artwork for their first full-length album ‘Accidental Bar-B-Que’ on social media I was immediately hooked and Tony soon sent me a copy of the release to have a listen to and review. ‘Accidental Bar-B-Que’ is 55 minutes of rather stylish music. Jazz tinged but with progressive music as its core, it is really infectious and intelligent music with a huge amount of joie de vivre running throughout.

The six tracks have, shall we say, interesting titles that also put a big grin on your face starting with opener Frozen Veg Alarm (yes, it really is called that!), a mesmerising meander with more than a hint of 70’s psychedelia to it. The metronomic music draws you in almost to a trance like state. The distinctive tone of Tony Harn‘s guitar is a constant echo in your mind before the track changes tack and opens up into something altogether more bright and infused with a sunshine like glow. The feel-good factor of the music is delightfully contagious as these three highly impressive musicians go about their business with n’er a hair out of place. Title track Accidental Bar-B-Que begins about as laid back as you could possibly get. Seriously chilled jazz that lulls you into a bit of a false sense of security, one minute you are relaxed and then the next it segues off into some experimental, free-form jazz jam that knocks your whole psyche off kilter. Like a warped soundtrack to some 70’s secret agent series it has an energy and rawness that actually makes you feel vibrant and alive. Tony’s guitar may be directing proceedings but the bass and drums of the Jones boys are the engine room of this highbrow creative track.

Mushroom Attitude has a 70’s hippy feel to it, some laid back world music that is creamy and effortless. Once again, the feel-good factor is ramped up to maximum, a carefree and untroubled tone runs throughout the opening minutes but, in the background, you can always feel something a bit more serious and vital that anchors the music back in the real world. The interplay between the three musicians is an absolute delight to behold and Tony’s signature guitar sund is becoming more and more recognisable with every note. Howard Jones’ drumming has a vitality and energy that gives it a life of its own and David Jones’ bass playing is superb. Onto Potholing and a song that begins as almost a nod to Hank Marvin with Tony’s intricate guitar picking reminding me of The Shadow’s guitarist. It’s a real fast paced and upbeat track in parts that gets your toes tapping and your head nodding. A touch of folk/country and even Canterbury scene to add to the progressive jazz tendencies perhaps with its hints of Camel and Caravan. The guys really excel themselves on this track and their musical interplay is almost fluid in its skill. It may be eleven minutes long but you get so engrossed that the time just flies by.

Split The Sketch has an apparent serious tone to it, a wealth of musical nous and years of nostalgia seem to seep out of every note and inflection. The guitar playing is more intricate and the bass and drums have an experienced and cultured edge to them. It reminds me a bit of when Neal Schon decided to go all serious and drop his guitar god guise on his instrumental release ‘Beyond The Thunder’ and has touches of that album’s quiet power, cool jazz licks and worldbeat rhythms to give this track a really soulful feel. The final track on this elegant release is the gracefully energetic Blue Blazes, a stirring piece that has an abundance of life and soul to it. Again those Canterbury touches are present and correct but just add to the heartfelt sincerity and emotion of the song. An evocative guitar note and the ardent rhythm section add layers of vivacity and substance to give us an emotive finish to the album.