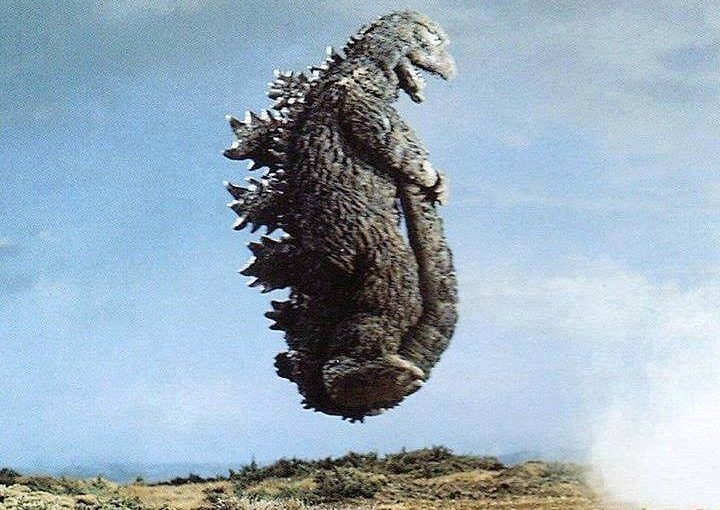 I’m a well known fan of instrumental music. I like calming, sublime tracks that elicit a feeling of grace, calm and serenity. Take Tony Patterson’s ‘Equations of Meaning’ for instance, not merely a great release, it is a state of mind that we should all aspire to when our Life in the Fast Lane gets too much for us.

However, there are times when only a metaphorical kick to the nether regions will do, a powerful statement of intent that literally knocks you backwards with its aggressive delivery and sends you on a spaced out trip with some psychedelic touches.

You have bands like With Our Arms To The Sun and SDANG! that exist at differing ends of the kaleidoscope of that powerful and mind-expanding spectrum of heavy instrumental music and I would now like to add German trio Godzilla In The Kitchen to that impressive club. Godzilla In The Kitchen is a three‑piece instrumental progressive rock band from Jena, Germany. All the band members were infected early by the work of great progressive and alternative musicians such as Pink Floyd, Marillion, Tool, Faith No More and Helmet, to name but a few.

In 2011 they started their first rehearsals, trying to combine all the different musical aspects tabled by every single one of them to create a unique mixture of melodical recognizability and rhythmic complexity. After three years of on-stage experience and practice these three guys decided to finally get their work pressed on a more tangible and of course a more sellable format.

So they started recording sessions in April 2014 and – after more than one year of recording, mixing and mastering a total of 10 songs with around 60 mins playing time – they were very proud to release their self-titled debut album in May 2015.

Felix Rambach. The living drum-machine, brings in all the complex framework to keep the strings together. If you can imagine a rhythm, he plays ist, even backwards if you like.

Simon Ulm. The third wheel, because every band needs a bassist. He makes all that complex stuff sound nice and goovy. Sorry girls, he’s married. To his Bass. From the uber-heavy, massive riff laden powerhouse groove of opening track Up The River, all the way through to the schizophrenic paranoia of closing cut The Fridge, there is no let up in the intensive musical mayhem that ensues. The edgy riffing, frenetic drumming and huge bass lines that you are treated to take no prisoners and listen to no authority but their own.

You want slow burning, brooding and oppressive then these guys can deliver it. Listen to the thunderous elephantine grooves of Broken Dance and The Turn and you will see a mind meld between funky stoner rock and dark and dangerous doom metal and one that plays off brilliantly.

I really like the upbeat and funky opening of Elis Speech with Felix’s almost jazzy drumming, Eric’s pleading guitar note (that has more than a touch of Satch to it) and the ever stylish bass of Simon completing this talented triumvirate and infusing this song with that West Coast feel of The Red Hot Chilli Peppers at times. Contrast that with the darkly dense macabre tone of Propagation Of Violence, a track that descends into the semi-lucid depths of industrial tinged metal, at times a glorious rock out to tones of thrash guitar and psychotic drumming and at others a pensive fall into blue funk and perturbation.

Dr. Moth is a funky consciousness-expanding trip into a hallucinatory world of contrasts between darkness and light and good and evil and Stick To Your Daily Routine is another introspective and reflective track that plays as if it has the weight of the world on its shoulders. A sombre, warning edge runs throughout its eleven minutes of saturnine and portentous overtone.

Provoking As Teenage Sex is a skittish, uneasy and uptight three minutes of paranoia that really gets under your skin and keeps you on your toes with its restive feel.

My favourite track on this release is The Universe Is Yours. Another eleven minute track with very much its own agenda. Undemanding and unhurried on the surface, there is a reserved undertone of melancholia that runs throughout. It leaves you with a feeling of unease, and a nervous titillation in your mind. A piece of music that gradually draws you in to its embrace, intentions unfathomable as you are pulled further into its hypnotic clutches. Deliciously creepy sensations run through you as the music continues to entrance your very soul, leaving a feeling of exploitation but one that you would defend to your very grave.

I love it when good music comes at me from left-field, bands that I never knew existed but are exceedingly worthy of my attention. Godzilla In The Kitchen deliver some seriously deep and psychedelic music that is not for the faint of heart. Trust me, don’t try to understand it, just enjoy it to the full!