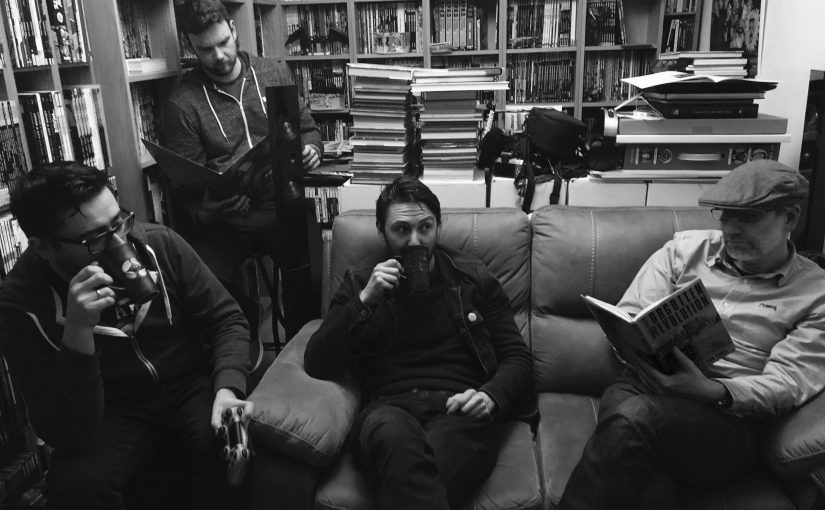 Let’s get something straight from the off, there are no zombies and (unfortunately for the hungry ones out there) no sign of any picnic of any variety but, what this striking album cover does contain is a very intriguing and involving six tracks of mainly instrumental music.

There seems to be a real clamour for that instrumental album with ‘snippets of archival voice recordings’ at the moment. Take Public Service Broadcasting and Nordic Giants for starters, and I’m a fully paid up member of the appreciation society!

Now Northern Ireland’s Zombie Picnic return with their second album and this time around the post-rock progressive four-piece presents six connected instrumental tracks spanning the two sides of this new LP. Combining a vast array of progressive musical influences with snippets of archival voice recordings (there you go, told you!) from thinkers and futurists of past and present, ‘Rise of a New Ideology’ delves into some dark and ambiguous places.

What we get is six pieces of thoughtful, intelligent music that really get you involved in this album. Opener Democracy Cannot Survive, with its slow burning, dark and sombre feel, starts things as they mean to go on. The contemplative, methodical rhythm section really gives focus to this song and the wispy, spaced out guitars take you on a magical mystery tour. It is nine minutes of mesmerising, metronomic music that draws you in to its earnest embrace. They See Science As Dangerous has a real west coast feel to it with the more psychedelic guitars and edgy drumming, where the previous track was all softness and rounded edges there’s a sharper, more blunt feel to the music on this song. Pugnacious, punky and in your face, yet with a 70’s feel, it is a well thought out piece of music. DEFCON is as laid back and chilled as they come. Nostalgia is there in droves and it has a lazy and hazy summer feel to it, life is good! It opens up into quicker paced, more insistent track with some stylish guitar playing but it never loses that twinkle in its eye or that skip in its step. There seems to be almost a sea-change as we come to track four where the spaced out, ambient sound takes a sharp ninety degree turn and becomes a lot more alt-rock and punky. Life-Support Systems sees an urgent, jangly guitar note take over and the rhythm section seems to press the fast forward button. It’s a clever contrast in styles and gives the album added impetus. There are a few lulls thrown in to give some context and the guitar playing really does go up a notch, they’re a really talented bunch these guys. See Beyond sees the band take another chill pill and give us another luscious and relaxed track where life seems to move at a much more easygoing pace and becomes nonchalant and spontaneous. The music takes on a breezy feel in places but there is always that feelgood undercurrent. Bang! That’s the hit to the auditory senses that the raging intro to Anger in Storage (Denial Will Follow) gives you, a violent mini-storm of angry music that blows you away. There is a calming of the storm but that uneasy, restless feel remains and you’re never far away from a Nirvana-like blast of guitars and drums to lull you out of any false sense of security you may have built up. An impassioned and cleverly indignant end to what has been an intense whirlwind thirty seven minutes of music.

I’m a big fan of music that takes me in a new direction and gives me a little something that I haven’t had before. The exemplary musicianship and well-crafted songs on ‘Rise of a New Ideology’ take an acknowledged genre and take it to the next level. Zombie Picnic are a band who are going places very quickly, just don’t expect rotting flesh and sausage rolls along the way…

Order ‘Rise of a New Ideology’ from bandcamp here