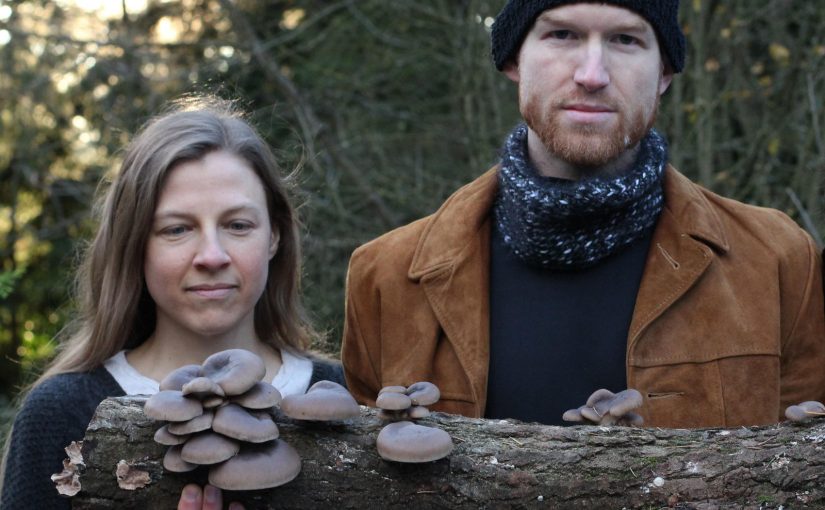 Music touches us, affects us and moves us every day. It doesn’t have to be up-beat cheerful music to make us happy and mournful, sorrowful songs won’t always make you sad. Music has a beauty and grace however it is sung and played.

I’ve been listening to the fourth album from American roots and folk duo The Winterlings and, it must be said, ‘American Son’ is not a release full of mirth and frivolity, it’s a collection of songs from the heart, delivered with honesty and sincerity and one that will move you on a most personal level. Wolff Bowden grew up in a house on stilts, fifteen feet above a Florida swamp. In Wolff’s dreams it was always winter, stood beside a bonfire, singing to half-animal, half human beings called Winterlings. Two decades later they had come to symbolise life’s deepest callings and he abandoned medical school for visual art.

Around the same time Amanda Birdsall was working on a doctorate in psychology when she looked down to find her notebook full of song lyrics. Walking out of class, she grabbed her guitar and drove to Canada to work on organic farms in exchange for food and tiny rooms to write songs by candlelight.

After meeting at a Buddhist fire ritual, Wolff and Amanda drove from Florida to the Pacific Northwest where they soaked up seven years of rain to give birth to over fifty songs. Singing from the depths of the American wilderness, The Winterlings shine their literary lyrics on subjects ranging from trangender Civil War soldier Jenny Hodgers to a friend’s lung transplant…and the life story of a housefly. ‘American Son’ is an intense experience from start to finish, opening track The Ghost of Leonard resulted from Wolff being visited by the ghost of Leonard Cohen while deep in meditation and it is quite a dark and yet deeply moving song with Wolff’s deep vocals reminiscent of the great man himself. Mournful and fragile, accompanied by the ethereal beauty of the violin and acoustic guitar, it is incredibly poignant and left a rather large lump in my throat. Title track American Son is songwriting at its basic and very best with an addictive chorus and a feeling of regret running throughout. The sparse instrumentation is the backdrop on which Wolff’s distinctive vocal weaves its story, Amanda adding her more lustrous voice in a great harmony.

Gold has a feel of the Old West to it with the opening languid harmonica and Amanda’s vocal brings in a real 70’s folk feel. Wistful and nostalgic at heart, there’s an unhurried frankness to the song. The easygoing guitar brings your pulse rate down and a calmness and composure envelops your very being. There is a sombre grace to both Birthplace and The Dead, imbued by Wolff’s excellent voice and the basic grace of the music. Touching and sentimental, these songs really get to you on a personal level, I find myself stopping whatever it is I’m doing and just listening. They are captivating and bewitching and the ability of Wolff and Amanda to hold you in their spell is incredible. There’s more of a lighthearted feel to Owl Mountain with it’s childlike charm and innocence. Amanda’s voice is a great counterpoint for Wolff’s more earnest and austere delivery and the sparsity of the instrumentation works perfectly. With a feeling of regret and loss, Puget Sound really tugs at your heartstrings with its raw heartache and yet it really touches you with its candid sincerity, you can’t help but become caught up in the story that is being laid out before you.

Sunspeech takes the allure of a simple acoustic guitar and Amanda’s wonderful vocal to give you a song that seems to be able to cleanse your soul. The plaintive strains of the harmonica add a real wistful, sepia tinged atmosphere to this absorbing piece of music and a touch of sadness fell over me when it came to a close. Wolff’s vocal has a rueful almost remorseful edge as he sings the opening lines of World To Change, there’s a feeling of restful change about the lyrics, “We won’t wait for the world to change…”. A plea to the world to change before it’s too late. That Was Alaska closes out the album on a thoughtful and reflective note and ,as the last note is played, I realise I’ve been at the centre of an utterly inspiring and satisfying musical journey.

With ‘American Son’ melancholy and wistfulness have never been so beautiful. A beguiling and entrancing musical journey through love, loss and regret where you feel every high and every low. The Winterlings have delivered a superb collection of songs that will stay with me for a very long time.